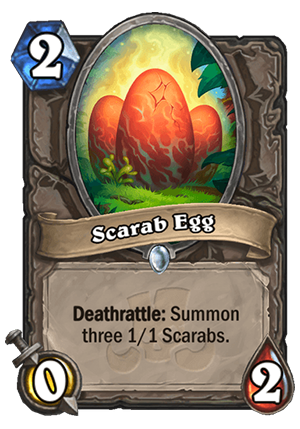 They say you can’t make an omelet without AHHH THEY’RE EATING MY FACE!
Tweet

This is an interesting card. While I wouldn’t call it a “sleeper” of the set revealed in the final dump, it might be better than a lot of people are giving it credit for. It’s a bit like the oldschool Nerubian Egg. While 4/4 has better stats, 3x 1/1 are certainly more powerful in some decks, decks that are based around flooding the board.

Maybe let’s start with quick Wild applications – I think that it might see play in Egg Druid (which loves board flooding), and maybe in a more board-floody Zoo Warlock deck. As for the Standard, it’s a bit more complicated.

Zoo Warlock might want to play it, but here’s the problem – it already runs Prince Keleseth in that slot. The current builds wouldn’t likely want to sacrifice Keleseth, but I could see a more board flood build working without him. You could run cards like

Luckily, the new Warlock spell that AoE buffs the board – Grim Rally – would resolve before Deathrattle, not buffing 1/1’s that come out of this Egg. Still, it might be a good way to make the card work – you would trigger the Egg AND buff the rest of your board. Grim Rally would also be quite powerful after you already destroy the Egg. You could also trigger it with Sanguine Reveler, Void Terror or Ravenous Pterrordax. The card has nice synergy with other minions, such as Knife Juggler or Sea Giant too.

Maybe an Aggro Token Druid will also make a comeback in Standard, because it would absolutely love this kind of card.

All in all, I think that this is a very strong card. It might not see play right away, but any deck that can trigger it quite consistently AND wants to flood the board might want this card. We might need to wait until the rotation before it actually sees play (as Prince Keleseth is just too good in a lot of builds), but I’m quite confident that it will be played in some meta decks eventually.

Card rating: 8/10 (but might be hard to fit after rotation)