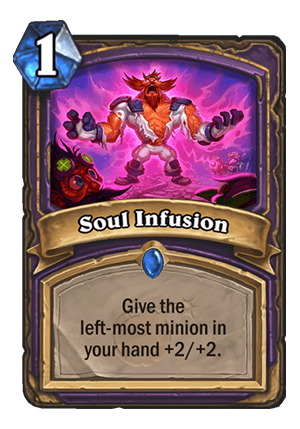 Soul Infusion is a 1 Mana Cost Rare Warlock Spell card from the The Boomsday Project set!

People called him a soulless monster. We're not sure this is better.
Tweet

First of all, I appreciate that it’s actually a left-most minion, not a random minion like Smuggler's Crate (well “Beast” is not completely random, but still more random than this one, since you would run it in a deck with lots of Beasts). An effect like that is much better if it’s controllable, even if only to a certain extent. Left-most minion is always the “oldest” minion in your hand (outside of the starting hand), so that’s actually a bit of a downside, since if you will be stuck with an early Doomguard on the left side of your hand, then you won’t be able to use it on the cards you actually want. I mean, technically it’s not that bad on Doomguard either, just not perfect.

Ideally, you want to hit cards that multiply, those on which you will get it multiple times. So Saronite Chain Gang or the new Doubling Imp make perfect targets for it. Hitting those basically makes it 1 mana for a +4/+4, which is insane in Zoo Warlock. But just a regular +2/+2 for 1 mana is not that bad. For example, Demonfire was a semi-common card in Warlock and it was solid. The downside of a handbuff is that you’re never able to use it as a “Charge”, extra stats are always applied with summoning sickness (or however it’s called in HS). But the 1 mana difference, and the fact that you can play it on anything and not only Demons makes it interesting. Hitting any minion in the early game might make it quite good. For example, a 3/5 Voidwalker or a 5/5 Vicious Fledgling (it can get really messy if your opponent can’t answer it immediately, and answering a 5/5 minion on T3 might be hard).

The problem is that it might be a bit hard to fit, especially in the current Heal Zoo list. The deck is already packed because of the Heal package, and you would want 2 copies of those and 2 copies of Doubling Imp too… But it might still be worth.

Technically you could also bring the Leeroy Jenkins + Power Overwhelming + Faceless Manipulator combo back. Just hit Leeroy twice with it, play it and Faceless it. The problem is that if you draw Faceless first, the whole combo is bad, making it completely useless (not to mention that it requires more setup).

I think that it’s an interesting card with some potential, getting 2x 4/4 on T3 or 2x 4/5 Taunt on T4 can be potentially game-winning as Zoo Warlock, the deck that cares so much about early game tempo.