Our Wild Magnetic Warlock Combo Deck Guide features a look at this potentially updated archetype for The Boomsday Project expansion. We take a look at mulligan and gameplay strategies, as well as walk through the pros and cons of this deck!

OTK Combo Warlock has existed before, back when Leeroy Jenkins and Soulfire each cost one less mana, but that combo did a maximum of 28 damage. With the introduction of The Boomsday Project, Warlock gets a new combo that can deal quite a bit more than that. 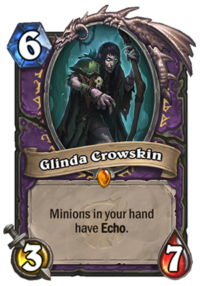 Glinda Crowskin from The Witchwood gives all your other minions Echo, allowing you to play several of them from your hand. Mechwarper, a minion from way back in Goblins vs Gnomes, reduces the cost of all Mechs in your hand by one mana. With nine mana available, you can play Glinda for six, Mechwarper for two, Mechwarper for one, and then Mechwarper for free up until you run out of space. So that’s great, as much as 15/25 stats on the board for nine mana, but there are better things you can do with just Glinda and one other minion (like Molten Giant).

With The Boomsday Project comes a new keyword: Magnetic. A minion with Magnetic can be attached to a Mech instead of being played as a minion by playing it to the left of a Mech on the field, granting that Mech all the stats and text on the Magnetic card. So far only Mechs have the keyword Magnetic on them. Once you have played Glinda and used her to put several Mechwarpers on the field (leaving at least one spot open) Mechs in your hand will cost as much as five less mana, allowing you to play just about any nuetral Magnetic Mech an infinite amount of times onto your Mechwarpers. This makes an enormous board that demands Poison Seeds, but again Glinda plus Molten Giant already does this. There are two great things you can do with this that you can’t do with Molten Giant.

First, you can heal to full. If the Magnetic minion you infinitely apply to your Mechwarpers is Zilliax you can heal to full and clear your opponent’s board. All the Mechwarpers will gain Lifesteal and Rush, allowing them to trade into opposing minions, heal for as much damage as you have the time to give them, and then you can put Zilliax on them again to refresh their Divine Shield. This can definitely swing the board in your favor, but it’s still vulnerable to cards like Poison Seeds and Twisting Nether, so you won’t always be able to close out the game this way.

You can also play other Mechs in your deck and wait for one to stick on the board. With a Mech surviving on the board and ready to attack, you can play the Glinda/Warper combo for as many as 4 Mechwarpers and infinitely Magnetize a Mech costing four or less mana to it before running it into your opponent’s face to win. Zilliax costs five so he’s out for this one, but Skaterbot costs less than four mana and also has Rush. This is important because once you’ve built your attack-ready Mech up to lethal damage you can pump up your Mechwarper to Rush into any pesky Taunts standing in its way. 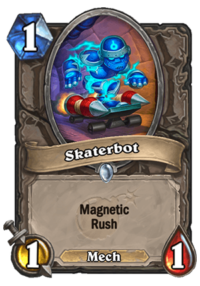 Now the combo needs Mechs that will stick around for a turn. Piloted Shredder is a good minion that discourages being removed at least a little. Harvest Golem and Mecharoo are Mechs that leave a Mech behind when destroyed. With the possible exception of Shredder, opponents are likely to sense what’s coming when they see these cards in Warlock and go out of their way to remove them. The best candidate is probably Coppertail Imposter, a Mech with Stealth for a turn. Simply play your Coppertail Imposter the turn prior to when you want to combo out, and your opponent will be forced to either waste their “destroy all” board wipe on a 4/4 minion or suffer the consequences.

What would the rest of the deck look like? Well this is a slow combo deck and these decks typically want survival and card draw. Glinda is fortunately a Warlock card, so the card draw portion of that is taken care of by Life Tap. As far as survival goes, it seems easy to fit the five essential combo pieces (Glinda Crowskin, Mechwarper, Skaterbot, Zilliax and Coppertail Imposter) into a Reno Warlock shell. You only need one of any of those cards, as Glinda being a legendary makes multiple iterations of the combo in the same game too clumsy to really be worth it. Reno Jackson and Warlock’s plethora of board clears will help keep you in the game until enough combo pieces are assembled, and if your Glinda gets targeted by Dirty Rat you can fall back on the normal Renolock value plan. 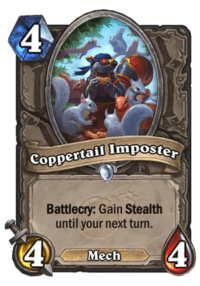 Reno decks often play Antique Healbot, who’s Mech tag has never been relevant and thus might slip under the radar for a turn to then be buffed to infinity by your combo. Another card that fits into Renolock with or without the combo is Giggling Inventor, who puts two Mechs with Divine Shield and Taunt onto the board. The Taunt portion of the card protects your life and the Divine Shield means that sometimes one of the two Mechs will make it to the next turn.

As time goes on control decks require game ending combos more and more. Druid has had most of the strongest ones for a while now thanks to Aviana and Kun the Forgotten King, but the Magnetic combo might give those decks a run for their money. Druid combo decks are very vulnerable to Dirty Rat as the draw and ramp engine that makes them so strong discourages including many minions outside of their combo. Magnetic Renolock comes with plenty of extra minions and won’t be nearly as easy to steal wins from in this way.

The best case game plan with this deck is to use Glinda Crowskin and Mechwarper to magnetize infinite Skaterbots onto a Mech that has been out for a turn to end the game. Occasionally a vital combo piece will get targeted with Dirty Rat or milled with Naturalize or Coldlight Oracle. In these cases this deck falls back on its usual Renolock value plan.

Unless you felt lucky enough to gamble your Mechwarper, Zilliax can’t be used to OTK the opponent with infinite damage (although it could add as much as 9 damage with 10 mana), but it’s still worth including. It’s an excellent anti-aggro card all on its own, and if you don’t have an attack-ready mech it’s handy to be able to use your combo to simultaneously wipe the board and heal to full when needed.

Against aggro you won’t often have to go with the full combo, and it’s against these decks that the Zilliax version of the combo is especially attractive. Aggressive decks rarely include a way to remove enormous boards, so if you pull off the much more reliable Zilliax combo you’ve as good as won. Don’t be afraid to play Zilliax without Magnetic if needed, the Reno shell can beat these decks all on its own by just surviving until the opponent runs out of steam. Mulligan for board wipes and Reno Jackson and these games will be pretty winnable.

Ideally you will full combo against all the slower decks you encounter. As stated above, this deck is not as vulnerable to Dirty Rat as other combo decks tend to be, but these matchups will often come down to when and how this card is played.

Druid combo decks need to be addressed with Dirty Rat, but it’s almost never a good idea to play it on turn two. These decks typically include Oaken Summons, and 2-3 minions to target with it. After your opponent has played some of these and drawn half their deck, it is usually safe to play your Dirty Rat (especially with Brann Bronzebeard) and expect to hit a combo piece. Wait until you have a way to remove whatever you pull. If you pull out Aviana and leave it on the field your opponent can still combo you.

When playing against a deck that is likely to include Dirty Rat you want to buffer your hand with extra minions as much as you can and hope you’re luckier than your opponent. Minions can still be played but make sure you hold onto at least a couple as you approach the turns your opponent will likely start to consider using it.

Druid decks are starting to play Naturalize, and Kingsbane Rogue decks play Coldlight Oracle. Current versions of these decks do not play Dirty Rat, and since you don’t want to overdraw your combo pieces playing out your minions is a very good idea against them.

Early removal and board presence cards like Kobold Librarian and Defile are great against aggro. Keep Reno Jackson every time, as playing him against an aggro deck often means victory right there.

Odd Paladin is pretty strong right now in Wild and there’s no big reason to expect it not to be after this set comes out. Keep Despicable Dreadlord against them, there will often be games where they’ll have nothing to play against it for a turn or two if it comes down on curve.

While not an auto-keep, if you suspect you’re up against Burn Mage Gluttonous Ooze can be useful to remove Aluneth. Removing their weapon won’t do you much good if you weren’t able to remove their early board so have an early plan before you keep it.

Reno Jackson isn’t as important in these matchups. You will generally want combo pieces and Dirty Rat if you know you’re up against a slow deck. Wild is an aggressive format, and it’s best to assume you’re up against the aggro version of a class if you think it’s likely to be either one. If you mulligan for aggro against control you just have to worry about drawing into your combo pieces, but if you mulligan for control against aggro you often lose. An example of a control class it’s safe to expect will be control is Druid. Aggro Druids have not been very popular or very good since the change to Innervate.

This combo is in no way limited to Renolock, I just think it will fit well there. You could explore a more zoo-like version that plays aggressive Mechs and only uses the combo as a backup plan. This would let you take advantage of Wargear, which is widely expected to be powerful. It’s possible to play the combo with only even-cost cards, so you could sub out the odd-cost Magnetic cards for Replicating Menace (although you do lose Rush which is good for Taunt removal) and play Genn Greymane.

If you’re sticking to the Reno shell then Loatheb and Zola the Gorgon might be worth fitting back into the deck. You could play Loatheb alongside Coppertail Imposter to make it that much harder to remove. Throw in an Emperor Thaurissan and you can even play them both with Brann Bronzebeard to defend it from Poison Seeds. Be careful how many slow cards you add, each one makes you more vulnerable to aggro.

Zola can give you an extra Reno against aggro and extra Dirty Rats or Gnomeferatus against control. There’s a strong argument that she should be in the deck already, in which case I would say Gluttonous Ooze is probably in her spot.