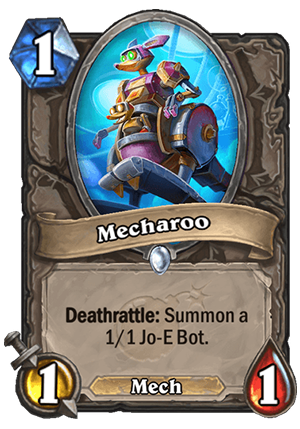 Mecharoo is a 1 Mana Cost Common Neutral Minion Mech card from the The Boomsday Project set!

Its project name was KAN-GA. The little one was R-00.
Tweet

This. This should see play. Remember Possessed Villager? It was a Zoo staple for a long time, and it didn’t even have any kind of tribe tag! Of course, the meta was different back then, right now 1 mana 1/3’s are much more common, so it might not get that many great trades. But it just show that a card like that has potential – after all, the meta will change a bunch of times before it rotates out. Still, it’s comparable to let’s say Argent Squire, which also sees play right now. In this case, both parts are Mechs, so they can be Magnetized onto, so it can obviously slot into Mech decks.

It’s a really solid, sticky 1-drop. That’s one thing aggressive Mech decks might have needed – we’ve seen some 1-drop Mechs, but only like 2 or 3 of them were good (mostly class cards). I like it much more than Faithful Lumi – both cards have 2/2 stats in total, but unlike Lumi, this makes a good Turn 1 play most of the time.

This is not as crazy as some other 1-drops (like Paladin’s Glow-Tron for example) but if you build a more aggressive Mech deck, this will likely be a part of it.