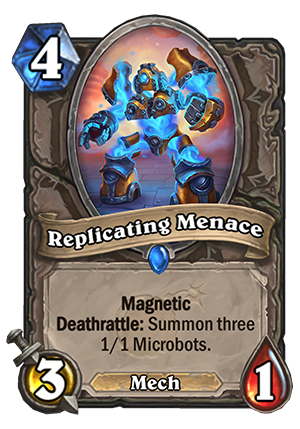 Would be absolutely busted at 3 mana, it’s only… meh at 4. The most obvious point of comparison is Eggnapper, which was actually good enough to see some Constructed play, but it was never broken or anything. And that’s 3 mana 3/1 that summons 2x 1/1. For one more mana, you get another 1/1 in a Deathrattle… which is absolutely underwhelming. You also get a Mech tag, which is alright. But the main selling point of this card is Magnetic mechanic. 3/1 can be pinged off easily, but adding +3/+1 to an already existing minion can make it trade up nicely, or just survive if it has more health. For example, sticking it to Nightmare Amalgam (the most obvious 3-drop in a Mech deck), it will be a 6/5 minion with Deathrattle: Summon 3x 1/1. Pretty good, but that’s about the best case scenario for this card, and you spend 7 mana and 2 cards in total for that.

And without Magnetic… Spending your entire Turn 4 dropping a 3/1 minion feels really, really bad. It’s slow, easy to take down, the 1/1’s don’t trade too well if you can’t buff them immediately etc.

To be honest, at 4 mana cost, the only way I can see it in Constructed is if some Token-oriented Mech deck pops out. The reason why Eggnapper has seen play in the first place was because Token Druid could utilize those 1/1’s quite nicely thanks to the cards such as Mark of the Lotus or Savage Roar. So we’d need a Mech deck also having a way to utilize tokens. Will it be a thing? I don’t think so, but we’ll see.