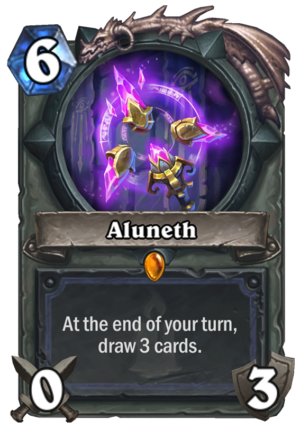 Aluneth is a 6 Mana Cost Legendary Mage Weapon card from the Kobolds and Catacombs set!

At the end of your turn, draw 3 cards.

The legendary Mage weapon! The staff of Aegwynn, Medivh’s mother, the… nevermind. There are many important things to be said about this card, least of which is its lore. Obviously, we have to start with the card text. Featuring one of the most broken lines of text to ever see the light of day on a card in a card game, this card has the effect “Draw 3 cards”. Now that it has our attention, how good is it really? Well, for starters, it comes at the whopping cost of 6 mana. Not only does that happen as late as turn 6, it also means that when played on a turn between 6 and 9, this is all you will be doing for that turn. In layman’s terms, you are passing your turn over to the opponent… and sure, drawing 3 cards in the process, though that might as well happen at the beginning of your next turn, because you can’t use them before that.

Then comes the part of the weapon’s stats, specifically it’s lack of attack power. At a value of 0, that means your character can’t attack with it, meaning it can’t naturally lose durability, meaning you are always going to draw 4 cards per turn for the rest of the game. And as any Miracle Rogue player is well aware, never ever go full Gadgetzan Auctioneer. Fatigue is a thing and it will kill you far more efficiently than the enemy player. The only way to prevent decking yourself to death is to either win the game before that point or destroy the weapon – currently the only way to do that is to equip another weapon, which in Mage’s case means playing exactly Medivh, the Guardian.

If you want to end the game before fatigue, one sure proof way to do so is to kill your opponent. If you are drawing lots of cards, that means you want them to not be expensive cards, because otherwise you simply can’t play them all. What’s cheap and good at killing the opponent? Damage spells! Sitting comfortably behind an Ice Block, the Mage has plenty of freedom to Fireball away the enemy’s face with a constant refill from Aluneth. Like many others, I feel like this card will fit into exactly one deck – Aggro/Tempo Mage, though it might finally be a fitting deck for the name Burn Mage.