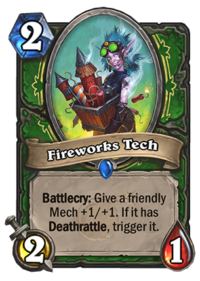 Deathrattle Hunter, also called Egg or Cube Hunter, is already a viable deck that’s pretty popular on the ladder. And with Hunter getting more Deathrattle synergies, it’s very likely that it will remain that way. However, since a new Hunter Deathrattle synergies are based around Mechs, some adjustments had to be made – cutting the Beast shell and adding a Mech shell instead. At this point it’s impossible to say which one is stronger, but I’m pretty sure that both of those decks can actually co-exist with each other, as they have their own strengths and weaknesses.

This version more Deathrattles to trigger than just Devilsaur Egg and Carnivorous Cube, making it much more flexible. Most notably, Spider Bomb can provide some serious tempo swings in the mid/late game, especially against Midrange and Control decks. With the amount of Deathrattle triggers for that card, you will be able to remove random minions left and right, often forcing your opponent to rely on the spells instead of minions (which is quite a handicap).

Deathrattle Mech Hunter, like the name suggests, is a mix of the current Deathrattle Hunter with the new Mech synergies. There are both upsides and downsides to incorporating Mechs to the deck. When it comes to upsides, the most obvious are: powerful Deathrattle effects (Spider Bomb, Mechanical Whelp) and a new way to trigger them (Fireworks Tech), a new win condition (Boommaster Flark). The downsides are lack of Prince Keleseth (you can’t play it because of Fireworks Tech) and no big Beast, which means that Carnivorous Cube has less targets (but Cube might not even get to the final list, more about that later). Another downside is that this build might be more clunky, because it relies even more on the Deathrattle synergies. Getting Deathrattle activators without Deathrattle cards, and vice versa, will hurt even more than ever.

Let’s first talk about the new Deathrattle cards. Spider Bomb may not be the best card by itself, but it’s absolutely massive in a deck like that. Normally, its biggest downside is that it’s delayed. If you just drop it against a big minion, the opponent might Silence it, play more stuff before trading to minimize the chance of the big minion dying etc. However, with multiple cards that can immediately trigger it in your deck, you basically don’t need any other single target removals, as you will be clearing big minions left and right. Against decks that don’t really flood the board, you should have a really good mid/late game board control as long as you draw Spider Bomb. Another powerful Deathrattle card is Mechanical Whelp. As a standalone card, it looks pretty bad. 6 mana for 2/2 minion is a very, very slow play. Even though the 7/7 it Deathrattles to is nice, it’s vulnerable to many cards, such as Silence. However, if you can trigger it immediately, then you will usually put your opponent in a difficult spot. He has to deal with the big one to not take lots of damage. And he wants to deal with a small one so you won’t trigger it again. But he doesn’t want to AoE, because AoE will still leave a 7/7 on your side of the board. You will often end up putting your opponent in those kinds of awkward situations.

We also have a new card to trigger those Deathrattles – Fireworks Tech. While it doesn’t work on Eggs or Cubes, it should still be pretty useful. In the worst case scenario, you can play it as a buff on Upgradeable Framebot. While a +1/+1 is normally not very good, given the 2-drop’s peculiar stat distribution, the buff will matter a lot more. 2/6 minion is simply so much better than a 1/5.

Boommaster Flark is another new card and I really like it in a deck like that. Even though a 7 mana 5/5 is very weak in terms of tempo, it creates FOUR Goblin Bombs. I feel like lots of people are underestimating that kind of effect. In a deck like that, it can be a great finisher. Unless they get Silenced, shuffled back into your deck etc. (mainly Priest’s domain), you should be able to activate all of them at least once, dealing 8 damage to your opponent. But realistically, you will probably trigger them a few more times, and that’s A LOT of damage. Another advantage of having 0/2 Mechs that your opponent doesn’t want to clear on the board are Magnetic minions, mostly Wargear. You can turn any one of them into a 5/7 minion and attack with it immediately. The 5/5 stats basically have charge, making those Bombs really useful for Magnetic synergies. You can also flip them all immediately with Void Ripper to deal 8 damage, sometimes it might be enough to close out the game. The main weakness of those is Spreading Plague, and that’s basically the only thing I’m afraid of.

Sunfury Protector and Void Ripper are tech cards. Sunfury Protector is there for two reasons. First, the deck needs more 2-drops without Prince Keleseth. It’s not the most optimal one, but it’s still a body to drop on Turn 2 if needed. Later in the game, it can be used either to Taunt up a bigger minion (like a 7/7) or “activate” a Devilsaur Egg by forcing your opponent to kill it. Ideally, the card will be replaced by some 2-drop Mech/Deathrattle card. Right now, Loot Hoarder is another option, but it’s not very thrilling. As for the Void Ripper, it can also activate Eggs. It can also be combo’d with Flark to activate all of the Goblin Bombs and pump out 8 damage immediately. On top of that, you can flip Upgradeable Framebot for some sneaky trades or damage. Flipping it and trading into a 5/5 or something would be amazing. And it’s also a general tech card, it can kill Totems, Doomsayers etc.

I’m on the edge about Carnivorous Cube. They might simply be too greedy. I actually thought about replacing it with something like Giggling Inventor – it would give you more defense against Aggro, which will definitely be a problem for this deck (just like it is for the current Deathrattle Hunter).  Cubes obviously have lots of potential in this deck – more Spider Bombs, more Mechanical Whelps (or 7/7’s), more Devilsaur Eggs etc. Since you can trigger them without killing them, even getting two extra copies of a 5/5 (either Devilsaur from Egg or Wargear) seems pretty nice. Later in the game you can combo Cube with Spiritsinger Umbra, which can lead to some crazy plays. Let’s say that you have a Spider Bomb on the board. You Umbra + Cube it. The killed Bomb will kill one minion. Umbra will proc on Cube and immediately  summon two more Bombs, which will also trigger, killing two more minions. You’ve cleared three minions and you still have two bombs on the board and two more in Cube. If you manage to stick a Mechanical Whelp it gets even more crazy. That play leaves you with full board – 2x Whelp, 3x 7/7, Umbra and Cube with 2 more Whelps inside. That’s basically a game-winning play unless your opponent kills you immediately, and Mechanical Whelp might stick to the board from time to time, since your opponent doesn’t really want to kill it. 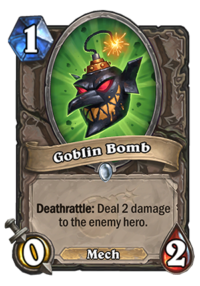