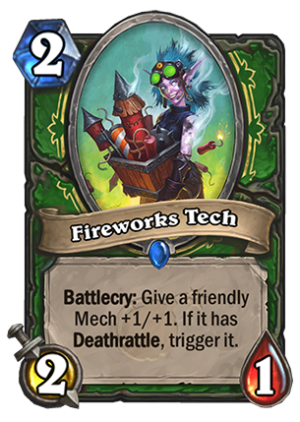 Fireworks Tech is a 2 Mana Cost Rare Hunter Minion card from the The Boomsday Project set!

Battlecry: Give a friendly Mech +1/+1. If it has Deathrattle, trigger it.

She learns by trial and error. Mostly error.
Tweet

This card has a very specific niche, it can basically be played only in Hunter Mech decks with Mech Deathrattle cards. It doesn’t make any sense to run it anywhere else. In regular deck, it will most likely be a 2 mana 2/1 without an effect. If you run it in a Mech deck WITHOUT Deathrattles, then you might just as well play Fallen Sun Cleric, it’s more flexible. But in its specific niche, it can be pretty powerful.

If you hit a Mech, it’s technically a 3/2 minion, so it has a solid stat-line. Triggering Deathrattle is also a very powerful effect. All in all, it can be compared to a less flexible Terrorscale Stalker. Which still makes it a great card, as Stalker is almost broken in the right deck. If you build a Deathrattle Mech deck you want to play both anyway.

Ideally, it would be nice to have another 1-drop Mech with Deathrattle that isn’t a Goblin Bomb, because Bomb is pretty bad to be honest. But even without it, it already has some solid synergies – e.g. triggering Spider Bomb to immediately clear a minion. You can also combo it with Mechanical Whelp to get a massive 7/7 minion on top of the buff. Cool stuff. But since Terrorscale Stalker is already a thing (and can do pretty much the same thing as this card and more), I think that people are overhyping it a bit.