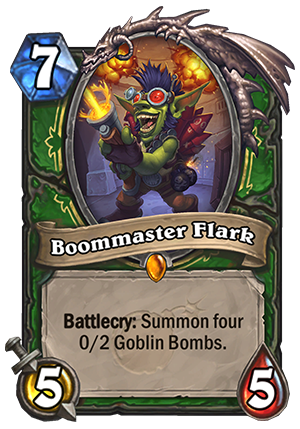 Boommaster Flark is a 7 Mana Cost Legendary Hunter Minion card from the The Boomsday Project set!

Every good plan requires a bit of patience. And a lot of explosives.
Tweet

I really think that this card should not be underestimated, at least in a Mech Hunter if that Archetype will turn out to be viable. While a 7 mana 5/5 is terrible, summoning FOUR Goblin Bombs is massive. Assuming you can trigger them, that’s 7 mana for a 5/5 + 8 face damage + possibly some extra synergies. Remember that the Bomb is actually a 1 mana card. Sure, it’s not the best one, but this is a 7 mana 5/5 that summons four 1-drops on play. It’s actually pretty crazy if you think about it that way.

And how can you trigger those, you might ask? There are some ways, actually. First and most obvious one is just letting your opponent trigger them. They’re a bit like an anti-AoE tech. When you play more onto the board (you will be limited to 3 minions on top of the Bombs, but that’s enough), there is a high chance that your opponent AoEs and clears them. Then, those are Mechs, so they’re great Magnetic catchers. If you buff them, it’s basically like giving the Mech you play Charge, which is nice. You can also use it as a great refill by playing Cybertech Chip before triggering them (so you will get extra Mechs on top of the damage). And Deathrattle Mechs might be the Hunter’s Mech theme this expansion (so far all of the Mech-related cards they’ve got are based around Deathrattle), so maybe the Legendary spell will have something to do with that too? Or maybe they will just get more synergy in general?

The worst thing about this card is probably that it gets countered hard by Spreading Plague. It alone gives FIVE Plague targets, and four of them have 0 attack… Another bad part is that it’s absolutely slow against Aggro. Spend 7 mana, no immediate effect, face damage is not that important etc. But it doesn’t necessarily disqualify it from seeing play.

By the way, in Wild this card has insane combo with Metaltooth Leaper. Your opponent doesn’t really want to AoE down your board, so you will probably have at least those 4 Mechs to buff next turn. Now he takes 8 damage immediately AND has to clear and take 8 more.

I wouldn’t sleep on this card. While it heavily depends on what other cards Hunter get, I see some potential in this one.