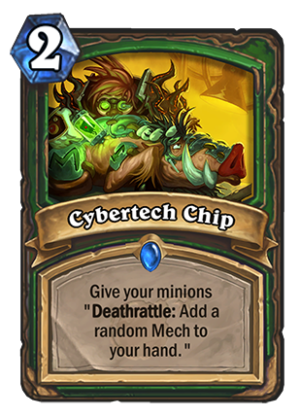 Cybertech Chip is a 2 Mana Cost Rare Hunter Spell card from the The Boomsday Project set!

Give your minions "Deathrattle: Add a random Mech to your hand."

The easiest point of comparison for this card is Infest. On the one hand, Infest has seen no play. On the other hand, it costed 1 more mana, and a lot of the bad cards would become great if discounted by 1. I don’t really like this kind of draw, but I have to say that it looks much better than Infest. While Beasts seem inherently stronger in Hunter, that is not the case for Mech Hunter specifically. In that deck, you’d rather get random Mechs than Beasts, which makes it an upside.

I dislike this kind of draw because you need to have some kind of board presence for it to work, and the effect is delayed. You can technically combo it with Unleash the Hounds, but if you UTH, you’re usually behind on the board, and when you’re behind on the board you want to do something else than getting more value. Not to mention that it’s hard to say whether Mech Hunter will even want to play UTH in the first place.

Whether this sees play or not heavily depends on how fast and aggressive Mech Hunters will be. If they will be an Aggro or a fast Midrange deck, then there will be no room for a card like that. Value generators with no tempo, which are dead cards in the late game are not good in aggressive decks. If they will be a slow Midrange or something like that, then I could totally see it being their refill. They would still probably want to play Deathstalker Rexxar, but you don’t draw it every turn. I’d say that getting 2 random cards from it is okay-ish, and it takes like 3 targets for it to be good (since it’s delayed). It might not be that difficult to get to that point.

P.S. Maybe in Spell Hunter, to combo with UTH and Spellstone? I doubt, because it doesn’t seem very reliable or necessary, and it’s a completely dead card by itself.