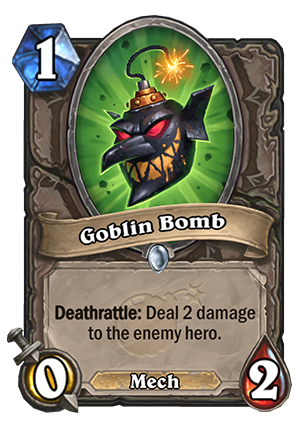 As much as I think that Boommaster Flark has some potential, I wouldn’t say the same thing about this card. It would be so much better if it had Magnetic, but without it, it doesn’t look good. It’s a 0/2 Mech for 1 mana, so it can’t attack, and its only selling point is dealing 2 damage on Deathrattle. Unless you run a full face deck, dealing 2 damage in the early game is mostly irrelevant, board control is much more important. So what that you deal some damage if you can’t trade into your opponent’s stuff and he gets ahead, overwhelms you and wins the game anyway? That’s the basic story of this card. You need to activate it, but even if you do, it’s not impressive. Like, Dragon Egg was a good 1-drop with 0/2 stats, because activating it actually mattered – you often got 1 or 2 extra 2/1’s to fight for the board (OR deal damage).

If not for the Mech tag, Leper Gnome is just better right now. It doesn’t need to be activated and it can actually trade into something. And Leper Gnome is still a bad card after the old nerf (it used to be 2/1 if some of you didn’t play back then). Mech Tag means that minions can Magnetize into it… and maybe it activates some buffs, like Faithful Lumi… but the body is still pretty weak. I just don’t see how dropping this on Turn 1 could help with winning the game. The only way for this to be playable is if we get some 2 mana Magnetic or Mech-buff card, so it can at least attack. And even then, the 0/2 stats aren’t exactly thrilling, same goes for the effect.