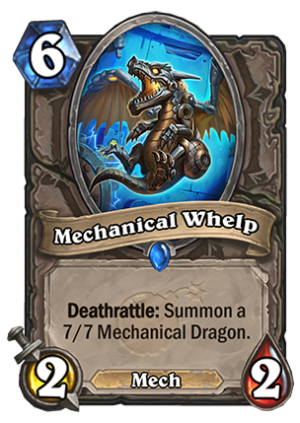 It’s quite interesting card, and I feel like lots of people are underrating it. The Cabal Shadow Priest argument is just silly. It would only be relevant if Priest would absolutely dominate the ladder and every build would run it. Right now, the card is in 2% of the decks on the ladder. You will play against it once in 50 games on average, and your opponent might not even draw it then. Silence argument is better – it’s a popular tech and might get even more popular in Boomsday. That said, Silence doesn’t necessarily disqualify this card, because you would ideally play in the decks that have synergy with it and/or can proc it immediately. Not to mention that you often play it in Mech decks, who have Magnetize, so Silence might be already used by the time you drop it.

First deck that comes to mind is the Deathrattle Mech Hunter, a deck that is already taking shape. On top of the normal Deathrattle triggers Hunter has – Play Dead and Terrorscale Stalker, the new Fireworks Tech can also trigger it. This + Fireworks Tech in the late game is a massive play – you have 3/3, 2/1 and 7/7 on the board, and that 3/3 will Deathrattle into another 7/7. In Mech Warrior, after you play Dr. Boom, Mad Genius, this card gets Rush, so you can pop it immediately (deal 2 damage to a minion) and then still have a 7/7 Rush minion. Great play for 6 mana. Even the new Deathrattle Priest might be looking at this card – with Reckless Experimenter on the board, it becomes a 3 mana 7/7 (which is even better than a 4 mana 7/7). If you build a Deathrattle deck with Zerek's Cloning Gallery, it can also be a great choice.

It’s not a game-breaking card, but as you can see, it has some solid synergies. I think that it will see some play in the upcoming meta, just not in the decks that have no synergy with it.