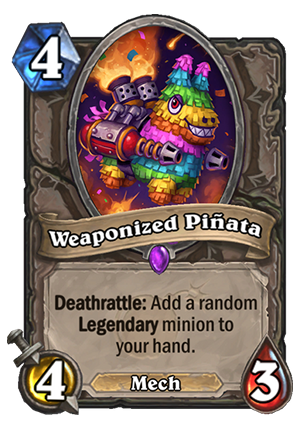 Deathrattle: Add a random Legendary minion to your hand.

I love this card’s theme, name, art etc. I really do. It’s really cool to get a card like that, you just know that you’re playing Hearthstone. But I don’t think this card is any powerful, to be honest.

First of all, people are ALWAYS overvaluing the random Legendary thing. It might have been better in the past, when there were only a few low-rolls and most of the Legendaries were big and well-rounded. Right now, we have lots and lots of small, often weak Legendaries, or Legendaries requiring a specific synergy to work. Most of the time, I’d rather draw a card from my deck than get a random Legendary.

This card is probably similar to Shifting Shade. Possibly even worse, because even though you might miss with the synergies, at least you’re sure that you won’t get an outright terrible card, unless your opponent deliberately have put that into his deck. With this card, you indeed can.

Despite it being a 4/3 Mech for 4, it’s not a new Piloted Shredder. Shredder’s strength came from the fact that a Deathrattle gave you extra tempo – in most of the mid game scenarios, a random 2-drop on the board is simply better than a random Legendary in your hand. Shredder was hard to play against, because even if you could kill the first body efficiently (and you often could), you still had to deal with the 2-drop. In this case, you don’t. You just deal 3 damage and you win the tempo war. Given that Mech decks are usually more Midrange/Tempo-oriented, the Mech tag probably won’t matter, since Mech decks won’t want to play this anyway.

Maybe something like Quest Priest might want to play this card, because it’s both Deathrattle and another value generator, just like some builds have played Shifting Shade before it rotated out. But it doesn’t seen very powerful, just okay-ish.