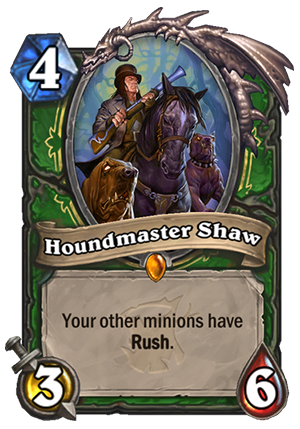 Houndmaster Shaw is a 4 Mana Cost Legendary Hunter Minion card from the The Witchwood set!

Your other minions have Rush.

This card is very good. Rush is a powerful mechanic – not as powerful as Charge, but it’s a HUGE tempo boost. It’s a card you can easily drop on Turn 4, but it also has a really good late game scaling, because when you’re on 10 mana, you can easily play it alongside some other minions.

When it comes to Houndmaster Shaw, the best comparison would probably be Tundra Rhino. It’s not limited to Beasts, costs 1 mana more and it’s 2/5 instead of a 3/6 – quite huge difference. On the other hand, it gives Rush instead of Charge and doesn’t get Rush itself. All in all, however, I think it compares favorably, and Tundra Rhino was already a card used in some of the decks.

Another card I would compare it to, not because of the effect, but because of the stats & impact is Priest of the Feast. The card has proven that 3/6 stats can contest the board quite nicely, and an ongoing effect like that requires a quick answer. Unlike Priest of the Feast, which only had to be answered right away when you play a fast deck (you can’t allow Priest to heal), this card has to be killed quickly in every matchup. After all, Hunter can start gaining tempo starting next turn and one thing is sure – you don’t want Hunter to stay ahead.

And the last card I want to compare it to is Fandral Staghelm, because I think that both will have similar impact. They’re absolutely “must-kill” 4-drop, because if they don’t die, they can snowball the matches quite easily. Fandral has better snowballing potential on curve (Nourish), but this one is harder to take down.

It has great synergy with Lesser Emerald Spellstone too – you can use the 3/3’s you summon to immediately trade into something. It’s hard to say whether a non-Spell Hunter deck will want to play Spellstone (Secret Hunter is taking a hard hit because it loses Cloaked Huntress), but if it will, this is a great combo.

I feel like this card should be played in all but the Aggro (and well, Spell, for obvious reasons) Hunter decks. It’s not game-breaking and not meta-defining, just like it doesn’t have broken synergies with any given deck. But it’s just well-rounded, strong card that will fit into non-Aggro/non-Spell decks.