Our Bomb Hunter deck list guide goes through the ins-and-outs of this new Hunter build for the Rise of Shadows expansion! This guide will teach you how to mulligan, pilot, and substitute cards for this archetype!

In the first days of Rise of Shadows, Bomb Warrior rose up as the deck to beat. One of the first to answer the call was Mech Hunter, a powerful anti-control deck that uses Deathrattle Mechs to create sticky boards that just cannot be destroyed. However, Mech Hunter has its own weaknesses, and soon aggressive decks were out in force to prey upon them. Hunter players searched for an answer to this new threat, and the result is Bomb Hunter.

Bomb Hunter uses a large variety of Mech minions, but it does so in a completely different way than Mech Hunter. Instead of emphasizing valuable minions and resurrecting them with Nine Lives, Bomb Hunter relies on the cheaper sticky Mechs. It starts the game with Mecharoo and happily Magnetizes Replicating Menace on whatever Mechs it happens to have on the board when the time comes.

It also uses bombs. Lots of bombs. Bomb Toss, Explodinator, Boommaster Flark, sometimes other bomb cards too. These bombs are not to be shuffled into the deck, they are to be played on the board and destroyed. Either the opponent destroys the bombs themselves, or Bomb Hunter will Magnetize something on them to carry on the attack. It is aggressive, it is relentless, and it has the Hunter Hero Power for some inevitable damage, the way it’s meant to be used.

As a result, Bomb Hunter is able to contest aggressive decks and go toe-to-toe against Tempo Rogue and Token Druid while still retaining an edge against slow decks: not quite the murderous, obliterating edge that pure Mech Hunter has in those matchups, but an edge nonetheless. This makes it an excellent choice for ladder, where you can face a large variety of decks.

Check out alternative versions of this deck on our Bomb Hunter archetype page!

You want to curve out, and that is especially true against fast decks. Mecharoo and Galvanizer form your main base to build upon, but from there you need to look for an effective curve, and it depends on whether you have a Galvanizer or not. Most of your early-game cards are viable keeps if they form a good curve.

The key word is Magnetize. Much of what Bomb Hunter does revolves around that keyword, and many of your decisions should be guided by thinking how you can preserve targets for Magnetic minions on the board. Think about it, Magnetic is effectively Charge! When you have Mech bodies ready on the board, you are constantly in control of the decisions to go face or trade. Do not be a fool, you also want to trade when you play Bomb Hunter, this is not a pure face deck. Trade decisions are mostly motivated by the desire to make your board difficult to clear: you mostly trade to protect Deathrattle minions and sometimes to protect regular Mech minions, and you go face when you have nothing to gain from trading.

Magnetization decisions should also be motivated by the desire to maintain your board. Which minion can you Magnetize on that is least likely to die next turn? What other choices do you need to make to support it? Can it hit face now that you are protecting it with less important minions? Does it take a value trade and enable the rest of your board to go face?

There are several small tricks that you can pull off while playing Bomb Hunter: 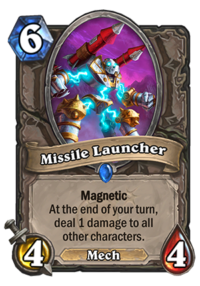 Missile Launcher + Venomizer is perhaps the most often used combo in the deck. By giving Missile Launcher the Poisonous ability, it will kill every minion on the board – for both players – at the end of your turn. This can be useful against Token Druids, but also against heavier decks such as Conjurer Mage, where their beautiful Mountain Giant + Conjurer's Calling combos can be ruined in a heartbeat. If the opponent lacks silence and hard removal, you can keep Magnetizing more stuff on the Missile Launcher and end up with one huge minion that kills all other minions every turn. If you play your Boommaster Flark when you have the Poisonous Missile Launcher on the board, all of the bombs will explode at the end of the turn!

There are many ways to use Fireworks Tech, it is one of the quiet stars of the deck. Using it on a Spider Bomb for a Deadly Shot effect is the basic move, but it can also give you some reach when used on a Goblin Bomb and provide you with some additional resources when used on Ursatron. The +1/+1 buff is also significant, as it can enable better trades or just more damage. 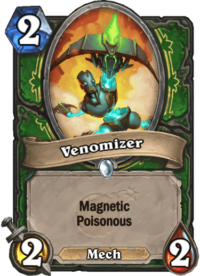 In the early game, Venomizer on a Goblin Bomb can often give you some board control: most early-game minions have three attack, so your 2/4 Poisonous Mech can take one down and survive as a threat for the following turn. I sometimes use Bomb Toss on the opponent’s Hero just to get a Mech on the board to prepare for that Venomizer play.

While not a bomb trick as such, Leeroy Jenkins can work nicely with Unleash the Hounds, as it gives the opponent two additional minions, and thereby it gives you two additional Hounds.

Carefully consider when you commit your Dire Wolf Alpha. It can activate multiple Goblin Bombs for trading – and the subsequent explosion effect on the opponent’s Hero – something you cannot achieve with a Magnetic minion. Sadly, Boommaster Flark summons two Bombs to the left and to the right of him, so you cannot easily activate them with Dire Wolf Alpha until Boommaster himself is dead. 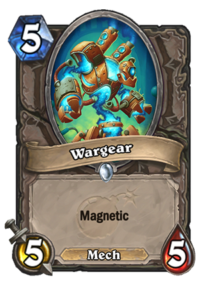 Aggro matchups are all about tempo. You need to get on the board early and try to gain an advantage. Your gameplan depends a lot on your hand: if you happen to have Zilliax, you have an opportunity to heal and that may give you more leeway on how to set up your own damage plan. If you have Wargear, you have a lot of burst available, and you may be able to go for a race to see who can deal damage faster.

Bomb Hunter is fast, and depending on the hand it may be the fastest deck in the game. However, some hands also encourage a more control-oriented approach. It is not trivial to determine whether you are the beatdown (and thus the one going face) or the control (and thus the one making trades) role in an aggro matchup. For example, I have played games against Tempo Rogues where all I do is hit them in the face and they are forced to respond. I have also had slow starts, lost the board completely to their swing turn and been forced on the defensive myself. I have won and lost games with both strategies. The point is that when it comes to speed, the margins between some of the top aggressive decks in the game right now are so small that the role you need to take in the matchup depends on your hand, not just on the decks you and your opponent are playing.

Regardless of the role you need to take, try to think ahead. How many turns until lethal? For you? For your opponent? What needs to happen for the game to end? In aggro matchups, it is typical that one player wins just one turn before the other would have lethal. Every point of damage counts. If you find yourself dying just one turn before you would win, try to look back at the game and see if there was some way to alter the clocks: Could you have dealt a bit more damage to arrive at lethal damage one turn sooner? Could you have taken just one more trade to make your opponent one turn slower without being slower yourself? Aggro matchups can be nasty, brutish, and short, and every decision counts.

In control matchups, it is at least easy to identify your role: you are there to beat them down. 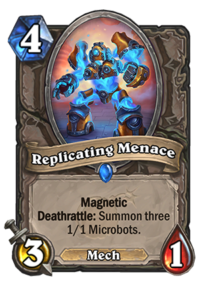 Magnetic and Deathrattle are your best friends. Try to make your board as awkward to remove as possible, and try to carry on the initiative after any partial clear with new Magnetic minion buffs going straight to the dome.

Against Warrior, as you are mostly a Mech deck, you already have the natural advantage of nullifying Dyn-o-matic‘s Battlecry effect. Brawl can obviously hurt, but your bombs may also punish for it. Warpath is the scariest piece, especially if the Warrior is able to build up any armor to use with Shield Slam. Replicating Menace‘s Deathrattle tokens can be cleared by Warpath, unless you can get it to high enough health that not enough Warpaths can be played.

Remember that you have a board clear too, despite being an aggro deck. Missile Launcher + Venomizer can be extremely valuable against Conjurer Mage in particular: they do not have a lot of ways to heal, so if you have access to the combo, you can push face damage very aggressively even if there is a Mountain Giant on the board. Turning it into Grave Horrors does not matter if you can just take them down instantly.

Even if things look bad, remember that you have a lot of damage available. The Hunter Hero Power will inevitably deal damage every single turn, so if you can get the opponent low, they may just lose to your Hero Power over a couple of turns unless they find healing. Furthermore, the bombs can add up too – Boommaster Flark of course, but also a simple Bomb Toss + Fireworks Tech after you have lost the board can deal a quick six damage to face together with your Hero Power.

Bomb Hunter is a fairly inexpensive deck. Even its expensive cards are mostly Neutral and widely used, and as such extremely safe cards to craft.