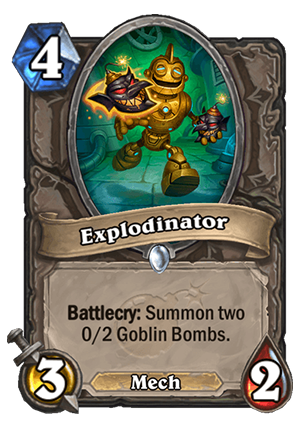 Explodinator is a 4 Mana Cost Common Neutral Minion Mech card from the The Boomsday Project set!

When it absolutely, positively, has to blow up overnight.
Tweet

Okay card, actually. At first it seems pretty bad – paying 4 mana for a 3/2 is not really good. However, if you realize that the 3/2 summons two 1-drops (Goblin Bomb), then it becomes much better. Like I’ve said many times, I don’t think that Goblin Bombs are worth 1 mana, it’s more like 0.5, but the fact that it combines two of those into one card and adds a body is worth something.

I disagree with calling it a 4 mana 3/6 like some people do. Adding stats of the cards like that is pointless, especially since in this case the 0/2’s can attack by themselves. The two 0/2’s, however, make nice Magnetic targets for the future turns. It’s basically like a miniature Boommaster Flark. Your opponent doesn’t really want to spend damage to kill Bombs and take damage himself, so he will often leave them, and then you can buff them or trigger their Deathrattles etc.

What I dislike about it is that it’s really slow immediately. While it’s good against slower decks, Aggro deck can easily clear the 3/2 body and possibly even the 0/2’s – he doesn’t care about damage anyway, and won’t spend many resources to do it (0 attack minions won’t hit back).

Another potential use for this is in some kind of Token deck, like Token Druid or Token Shaman. Summoning three bodies is quite alright. But I think that Giggling Inventor might just be better for that.

So overall I’d say that it’s about average.