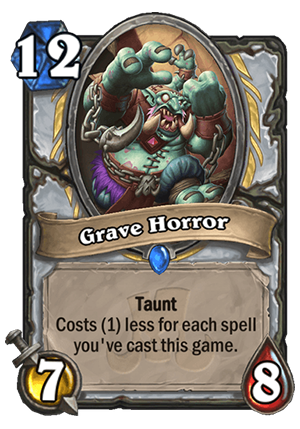 Taunt Costs (1) less for each spell you've cast this game.

Trolls can regenerate lost limbs, but this is what they do with the leftovers.
Tweet

Well, it seems that they’re slowly running out of ideas… This card is a better version of Arcane Giant (trading 1/16 of stats for a Taunt is a great deal), and Arcane Giant is an amazing card (I’ve even put in on the list of best neutral Epics ever). However, Arcane Giant has never really seen play in Priest. Most of the decks either didn’t play enough spells to make it work, or it just wasn’t necessary. That’s the thing about Priest – the deck is rarely about late game tempo swings.

However, there is one deck that might fit into that description. It runs A LOT of spells (most popular build uses 19 to be precise), and it wants to get some solid late game tempo swings. The deck is Resurrect Priest (Zerek's Cloning Gallery build). When it comes to getting it from Shadow Essence or reviving, it’s not as strong as The Lich King or Obsidian Statue, but a 7/8 Taunt is still a 7/8 Taunt. Plus, the deck relies heavily on Lyra the Sunshard value in some games, so casting those 12 spells shouldn’t be that hard. The question is – can you actually fit it into the deck? That seems very tough.

I like the fact that it can be dropped right after Psychic Scream turn in the late game. Most of the time, Scream takes your entire turn and you can’t do anything. Having a 7/8 minion on board is a massive difference – you either have something to trade with immediately after, or force your opponent to deal with it on his turn (so you get back most of the initiative).

Of course, the card would be amazing in a sort of Spell Priest deck that runs Legendary weapon (Dragon Soul), but players have tried to make it work multiple times. It’s way too weak in the early/mid game until it starts to roll the spell synergies, and this is not going to help with that. It would be a nice addition, but not a card that makes the deck.

So all in all, despite the card being really powerful in theory, it might turn out to not see much play in practice. Of course, even if it doesn’t now, we still have 3 more expansions when it will be in Standard, so maybe some kind of spell theme will get pushed eventually.

Card rating: 8/10 in theory, but might not find the right deck and not see play at all