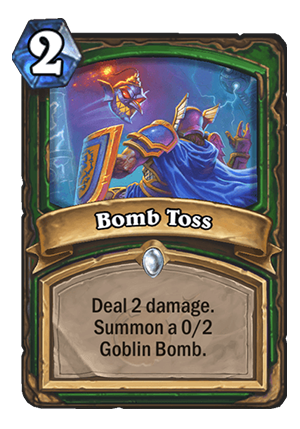 Bomb Toss is a 2 Mana Cost Common Hunter Spell card from the The Boomsday Project set!

Important to mention first that this card can go face. Lately they’ve been cutting down on those and most of the early removals work only on the minions. Normally, you expect 3 damage for 2 mana. This deals 2, but also summons a 1-drop. Which would generally be an amazing thing, but that 1-drop isn’t very exciting. Goblin Bomb, I’ve mentioned it many times already, is not really worth 1 mana, because it’s pretty bad.

That said, even if you count Gobiln Bomb at 0.5 mana, this is already a pretty solid card. You can use it for the early board control and summon a bomb, or later in the game to deal face damage and possibly finish your opponent off with the bomb too. If anything, this might go into an aggressive Hunter deck with lots of bombs and ways to trigger them, plus lots of Magnetize minions to take advantage of them. In that kind of deck, it should be a good card. In others, hard to say, I don’t see it outside of a deck that can reliably trigger the Bombs and runs Magnetize. But it can be powerful in that kind of deck.