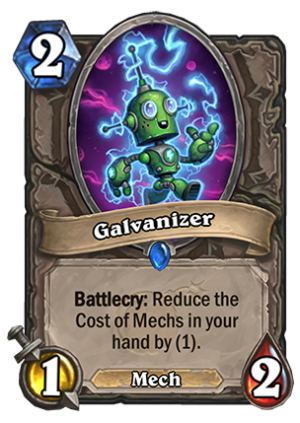 Galvanizer is a 2 Mana Cost Rare Neutral Minion Mech card from the The Boomsday Project set!

Battlecry: Reduce the Cost of Mechs in your hand by (1).

A new, toned down version of Mechwarper. Which is fine, because Mechwarper was one of the first real “mana cheat” cards and it could lead to some crazy scenarios.

First of all, stats. That’s where the card is much weaker than Mechwarper – 1/2 vs 2/3 is a huge difference on a 2-drop. Mechwarper actually had 2-drop’s stats, this has a 1-drop’s stats. Of course, if the effect is good enough, it will make up for that fact, and I believe that it’s the case here. But it luckily won’t be as broken as Mechwarper.

And now to the more important part – effect. I would say that the effect are comparable, and maybe this one is even stronger. The biggest difference is that Mechwarper’s effect was active as long as it was on the board. So in case it stayed there for 3-4 turns or something, it was absolutely busted and way, way better than this. On the other hand, lots of the time it was just killed by Fiery War Axe (2 mana…), Wrath, Frostbolt and such. It rarely stayed on the board for longer than 1-2 turns, but if it did, Mech deck usually won the game. This effect, on the other hand, is more consistent. If you drop it when you have 3 Mechs in your hand, you will get 3 mana discount in total, and that’s it. It doesn’t matter if it stays on the board or dies, the effect is still there. Which I believe made Mechwarper’s effect better in tempo-oriented decks, which usually had a low hand size and really wanted the discount on topdecked Mechs too. On the other hand, this fits more into a bit slower Mech decks, the ones that can wait before they have multiple of them in the hand before dropping this. It’s also better for any Combo deck using Mechs, since the discount is permanent.

That said, I think that even faster Mech decks will gladly take it, even though it’s no Mechwarper. It can speed up your progress and create some amazing curves. For example, in Paladin, you can drop this on T2, then Magnetize an Annoy-o-Module into it on T3, then Wargear on T4. If your opponent doesn’t have Silence or big removal, then you basically win the game with your 8/11 Taunt + Divine shield combo on Turn 4.

It’s a solid card and should see play in Mech decks. It’s nowhere near as degenerate as Mechwarper was, but that’s great. Of course, its viability will depend on how strong Mech decks turn out to be, and that’s a big question right now. We still haven’t seen most of the Neutral Commons/Rares, and they might be holding some nice Mechs/Mech synergies out there.