The Best Cards to Craft are either Legendaries played in a variety of decks or ones that are staple in a strong meta deck. Given their strength, they’re very likely to continue seeing play before their rotation. Good Cards to Craft are Legendaries that are less popular and possibly not as strong, but also playable in the current meta. They are usually necessary (or at least very helpful) in a specific, less common archetype. Some of them are more of a tech cards / Legendaries specific to this meta and might not see that much usage in the future.

There are currently no Classic Legendaries that I would consider “best” crafts. 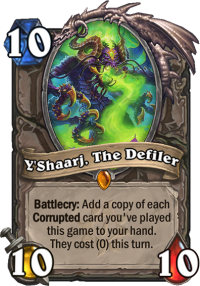 Darkmoon Faire is the latest set, so we had less time to judge the power level of those cards – keep that in mind!

The Year of the Dragon consists of Rise of Shadows, Saviors of Uldum and Descent of Dragons. All three sets will rotate out of the Standard format with the release of the first expansion of 2021.

I DO NOT RECOMMEND CRAFTING YEAR OF THE DRAGON CARDS UNLESS YOU HAVE A LOT OF SPARE DUST, SINCE THEY ARE GOING TO ROTATE OUT SOON!

There are currently no Rise of Shadows Legendaries that I would consider “best” crafts.