Our Odd Mage deck list guide for the Rastakhan’s Rumble expansion features one of the top lists for this archetype. This Mage guide includes Mulligan Strategy, Gameplay Tips, Card Substitutions, and Combos/Synergies! 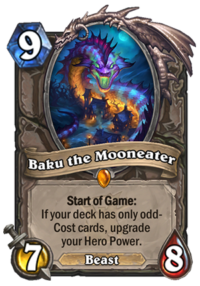 Odd Mage is a control archetype revolving around the great value generated by the removal capabilities of the upgraded hero power and the synergistic cards like Daring Fire-Eater and Pyromaniac. Your strategy is almost always to outlast and exhaust your opponent, slowly generating an endless stream of Water Elementals once Frost Lich Jaina hits the board.

In many ways, this is going to be the last hurrah of Mage’s Death Knight before the impending rotation marks the end of the Year of the Raven – and appropriately enough, the final expansion of 2018 has certainly given the grindy Mage archetype a lot to play with. “Big Spell Mage” was on the fringes of the metagame for a long time, and while it was always excellent at clearing wide boards and winning with the Death Knight in ultra-lategame scenarios, mid-sized threats were always an issue for the deck, something which the strong hero power has alleviated surprisingly well.

That being said, the Odd restriction means the loss of Polymorph and Meteor (alongside Blizzard), which means getting through the first turns until the promised land of Jaina is nowhere near guaranteed. Still, Blast Wave is an excellent pickup, and the combination of these changes makes Odd Mage surprisingly more effective against aggression than some of the ultra-sticky or “solitaire-like” Control decks that defined parts of the early Rastakhan meta.

Check out alternative versions of this deck on our Odd Mage archetype page! 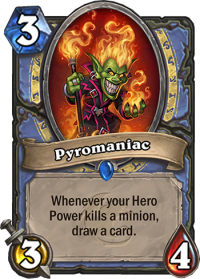 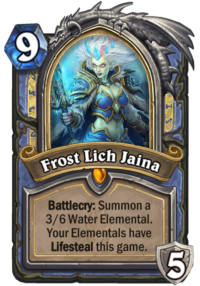 While this kind of a deck was historically very good in long and grindy matchups, the current metagame we’re seeing Rastakhan puts it in a weird position: with a wide variety of OTK-esque finishers ranging from King Togwaggle to Kingsbane and shenanigans with Uther of the Ebon Blade, these are actually not the matchups you’re targeting this time around. Instead, it’s the aggressive opponents who are going to fear your name: it’s incredibly tough to get onto the board against this archetype.

You need to put a premium on consistent minion removal in these matchups – not only because this is what your deck excels at in the first place but also due to the relative scarcity of healing options until the hyper-lategame. Frost Lich Jaina is almost guaranteed to be your closer: your main job is to minimize the incoming damage until you find a safe moment to play her at some point.

That isn’t to say you can’t find spots to take over the board: once you’ve cleared your opponent with either Dragon's Fury or Blast Wave, Astromancer and Jan'alai, the Dragonhawk can give you an early opportunity to flip the tables – and needless to say, once you manage to establish a stable board presence, your opponent is pretty much down to burn options as a win condition.

The more resource-intensive the aggro archetype, the more patient you’ll have to be. Something like Odd Paladin has a much easier time refilling the board than Zoo does – therefore, paradoxically, you should try to get the former to commit more before wiping the slate clean.

You have a very important to decision to make early on in the slower matchups: it’s imperative to figure out whether you’re the beatdown or your opponent. You’ll be surprised to find how often you’ll have to go on the attack: many of the aforementioned archetypes (Togwaggle Druid, Kingsbane Rogue, OTK Paladin et cetera) pretty much auto-win against you if the game goes on for a long time.

In these cases, you need to relentlessly emphasize early tempo with cards like Pyromaniac and Black Cat in order to push repetitive damage. Needless to say, Jan'alai, the Dragonhawk is a pretty important piece of the puzzle in these matchups; also, you are capable of dealing a surprising amount of damage with your hero power. If you can manage to keep up a wide board, Alexstrasza can serve you very well as a surprise finisher.

Otherwise, the strategy is fairly similar to what you saw with the old Big Spell Mage archetype: hang in there on tempo before Jesus and Frost Lich Jaina take the wheel. The infinite loop of Water Elementals is still strong enough to put you over the top against most non-OTK Control opponents.

With the new Rastakhan cards, Odd Mage is a bit on the expensive side a mid-tier deck when it comes to the Dust required to build it – since Blast Wave (and Astromancer are Epics and Jan'alai, the Dragonhawk is a legendary, you’ll likely require significant investment for the featured build. You can find a short rundown of the pricier cards below and certain replacement options depending on what kind of a metagame you’re facing.