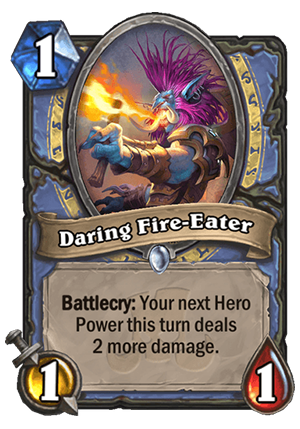 Battlecry: Your next Hero Power this turn deals 2 more damage.

A few hours later he DESTROYED the arena bathrooms.
Tweet

I’ve already covered most of the Hero Power stuff when talking about Spirit of the Dragonhawk and Jan'alai, the Dragonhawk, so check out those if you want to read more of my thoughts.

I don’t really see playing this in a regular Mage deck without other synergies. Look at it this way – would you play a 3 mana 1/1 that deals 3 damage? You probably wouldn’t, because it doesn’t sound very good. 1/1 is negligible and 3 damage for 3 mana is mediocre. It’s not a terrible card, but it’s not very good if you think about it this way. You need some synergies.

The most obvious and strongest synergy is the one with Spirit of the Dragonhawk, but I’ll be honest – it’s still pretty clunky. It’s a 2 cards combo and 5 mana to deal 3 damage to 3 minions. Jaina is the queen of AoE, the class really doesn’t need something like that. That’s why I don’t think that a full-blown Hero Power Mage will work out very well.

The card works okay in Odd Mage. The deck already deals 2 damage with Hero Power, so this pumps it up to 4, which means that it can clear most of the mid game plays, as well as deal some serious damage to the opponent. But maybe most importantly – it helps you get to the Jan’alai faster. In a deck that runs the 7-drop, you want to get it on the curve as often as possible. So if anything, that might be the best use for this card. It’s not particularly powerful, but it makes using an actually insane card more consistently.

Now, the problem is that this is not a 1-drop. Odd Mage desperately need some sort of good 1-drop, especially after Mana Wyrm was nerfed.