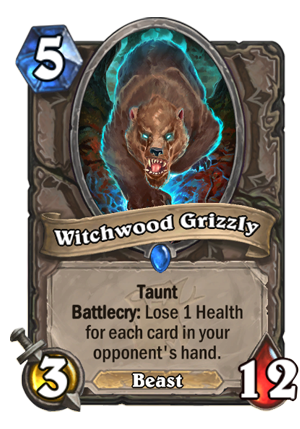 Witchwood Grizzly is a 5 Mana Cost Rare Neutral Minion Beast card from the The Witchwood set!

Taunt Battlecry: Lost 1 Health for each card in your opponent's hand.

You know what they say about people with big hands? Small bears.
Tweet

At first I was sure it’s a Druid card, I even labelled it as such. But it’s Neutral – how cool is that? It’s the second solid Neutral anti-Aggro tool we’re getting after Rotten Applebaum.

Scaling with the number of cards in your opponent’s hand is a very cool mechanic. The best case scenario is this being a 3/12. Worst case – 3/2, but more realistically 3/3, because your opponent won’t likely keep 10 cards in their hand, as that would burn their draw. 3/12 for 5 mana is insane, 3/3 is completely unplayable. So how good is this card?

First of all, we need to understand why you’d run it in the first place. It’s an anti-Aggro tool. You play it when you face lots of Aggro decks. And it does its job – on Turn 5, your average Aggro deck isn’t likely going to have more than 2-4 cards in their hand, so it becomes a 3/10 to 3/8 Taunt for 5 mana. First is amazing, the second one is still good for the mana cost.

On the other hand, if you play against a Control Warlock, this will most likely be a dead draw. They rarely have less than 6-7 cards in hand, so no matter when you want to drop it, it will be bad. Maybe after they’ve played Bloodreaver Gul'dan and are slowly running out of cards already, but it could sit dead in your hand for 10 turns or so until that happens.

However, to be honest, if that would be it, I think this card wouldn’t really be used a lot. The upside against Aggro is not big enough, it can also be countered by Divine Favor against Paladin. Aggro decks usually run some sort of Silence or ways to deal with big Taunts anyway (Sunkeeper Tarim…). And it’s just bad against Control.

However, there are some cards that might make it better. Much better. One of the synergies is Witching Hour – you can resummon this as a 3/12 Taunt for 3 mana. Another synergy is Master Oakheart – pulling it from your deck and bypassing the Battlecry, so you get a HUGE minion for your trouble. And finally, Lady in White. Once you play her, this becomes a 12/12 when in your deck. Of course, when you drop it on the board, it will most likely lose some attack, but it’s still going to be great. Let’s say against a Control deck with 7 cards in the hand, so average vs Control scenario, instead of a 3/5 Taunt, it will be a 12/5 Taunt – huge threat that they have to deal with immediately, as opposed to something they can easily ignore for a few turns. If you play it in a Kathrena Winterwisp deck, you can pull out a 3/12 Taunt on a Battlecry or Deathrattle, definitely a great option. On top of that, Hadronox would also be amazing synergy, but it means that you’d have to run this card in the first place, and that might not be good enough.

I like the card, and while I don’t think it’s going to be auto-include, it will be great in the right deck – a deck that can combo it with something.