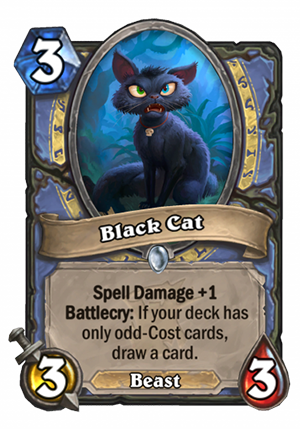 Black Cat is a 3 Mana Cost Common Mage Minion Beast card from the The Witchwood set!

Spell Damage +1 Battlecry: If your deck has only odd-Cost cards, draw a card.

First things first – I wrote my first part of reviews just a few days ago and I was already wrong! For some reason, I assumed that the Odd/Even effects will be present only on those two Legendaries, but it seems like we’ll be getting some support cards. However, to quote the game designer Mike Donais, not every class will get those and mostly the “less obvious” combinations are going to get more synergies. For example – this one! For Mage, going for the Odd cards only and Baku the Mooneater seems weird. But let’s first take look at the card itself.

3/3 for 3 with card draw and Spell Damage… well… It’s a miniature Azure Drake. However, given that it costs 2 mana less, effect is scaled 1:1 and the only difference is -1/-1 in stats (well, and a Beast tag instead of Dragon, but it’s mostly irrelevant in Mage) – the card turns out to be way more powerful than Azure Drake, which was already a great pick in Mage. Especially the Spell Damage part, which was only a nice addition on the Azure Drake, seems to be one of the main selling points of this card. It’s much easier to combo 3 mana spell damage minion than a 5 mana spell damage minion. For example, you CAN play this on Turn 10 with Flamestrike to deal 5 damage. It’s a great card throughout the entire game – good thing to drop on the curve and scales very well into the late game.

I believe that it’s the most powerful of all the odd/even synergy cards revealed, and yet I also think that it won’t see any play. With out current knowledge, I don’t believe that Odd Mage will be a thing, unless the class gets a few powerful Odd-cost spells right away.

Because, you see, what’s the point of having Spell Damage minion when you pretty much can’t play any good spells? Or well, you can’t play other strong cards too? Here is just a quick list of things you’d need to drop from your deck: Frostbolt, Doomsayer, Arcanologist, Sorcerer's Apprentice, Primordial Glyph, Fireball, Polymorph, Blizzard, Meteor. At the same time, some of the odd-cost spells like Volcanic Potion or Firelands Portal, that you might use to fill the curve, are rotating out. Secrets can also be played, but without Arcanologist, their value gets down significantly.

I don’t believe a Control Mage would be able to sacrifice so many cards just to get this mini-Azure Drake and upgraded Hero Power. At the same time, I don’t believe that a messed mana curve and lack of Frostbolt, Fireball etc. is worth the sacrifice for a faster, more Tempo-oriented Mage deck. Not to mention Aluneth, which is MVP in all of the fast Mage lists.

So my only guess is that, in case they print some more big, odd-cost spells, a Big Spell Mage might actually want to play it. Dragon's Fury is odd, Arcane Tyrant, Dragoncaller Alanna and Frost Lich Jaina are odd, but the only big odd spell left is Flamestrike. Literally. Firelands Portal and Greater Arcane Missiles are rotating out, and all other spells are even. Baku actually makes sense in Big Spell Mage. The biggest challenge is getting through the early game, and a 2 damage Hero Power that can hit anything as well as this Black Cat might actually help. Even though the card won’t affect the Hero Power from Frost Lich Jaina, that’s not a big deal – by the time you play her, it should have already done its job.

To sum things up, I believe that the card is amazing, even broken, but it’s still not worth the sacrifice in Mage unless the upcoming Mage spells will be strong AND odd-costed. Even then I’m not sure if it won’t be better to just play it with Blizzard, Meteor etc.

Card rating: 4/10, unless they print some really powerful odd-cost spells