Our Big Spell Mage deck list guide goes through the ins-and-outs of this newly reborn Mage build for the Saviors of Uldum expansion! This guide will teach you how to mulligan, pilot, and substitute cards for this archetype! 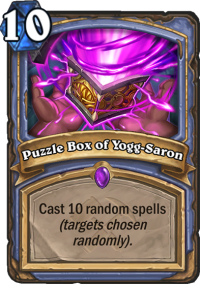 The first time Hearthstone players started building Mage decks with a disproportionate number of expensive spells was in Kobolds and Catacombs in December 2017, when Dragoncaller Alanna rewarded players for playing them and Dragon's Fury punished players for including any cheap spells alongside the big ones. After those cards rotated out of Standard format, there were no incentives to play big spells anymore and the archetype disappeared overnight.

Saviors of Uldum brought Big Spell Mage back, in some form, anyway. The new synergy cards are Puzzle Box of Yogg-Saron, King Phaoris, Tortollan Pilgrim, and Naga Sand Witch, although there are many variants of the deck and not all cards are used in every variant. Puzzle Box of Yogg-Saron promises the power of pre-nerf Yogg-Saron, Hope's End at will, while King Phaoris summons powerful minions as long as you have expensive spells in hand, and Tortollan Pilgrim provides access to more copies of your big spells earlier in the game. None of the three punish you for running cheap spells either, so you’re free to mix and match for the best combination. Naga Sand Witch can enable big spells even earlier, but as a downside it also makes your small spells more expensive, so it has not found a place in some of the builds. 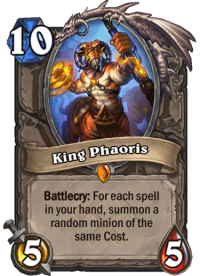 Overall, there is an abundance of slow Mage archetypes on the ladder at the moment: Highlander Mage is the top contender as an amalgamation of everything and some Highlander synergy cards thrown in the mix, Big Spell Mage focuses on the new synergy trio of Puzzle Box of Yogg-Saron, King Phaoris, and Tortollan Pilgrim to build boards and wipe out the opposition with random effects, Freeze Mage relies on freezes and burn, and Cyclone Mage with its random spell generation still presents a credible threat. All Mage archetypes retain access to the powerful Mountain Giant + Conjurer's Calling combo to just blow out the opposition early if given half a chance.

With some minor changes, you can significantly change the way your Mage deck functions and switch from one archetype to another. In this guide, we focus on the Big Spell Mage variant.

Check out alternative versions of this deck on our Big Spell Mage archetype page!

Ironically, Big Spell Mage wins games with big minions, and not directly with big spells. Your goal is to assemble a powerful board that the opponent is unable to answer. Several tools in the deck help you achieve this, or help you to build one board after another until the opponent eventually crumbles. 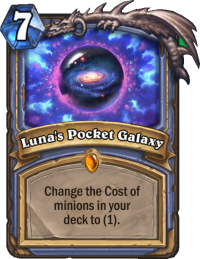 Luna's Pocket Galaxy is a key piece. As it discounts all minions in your deck to one mana, it effectively makes all future Mountain Giants free to play and enables you to combo any of your big minions with Conjurer's Calling for even more big minions, because it summons random minions based on the original mana cost of the target, not its discounted cost. If you have an Arcane Intellect in hand, and you already have Luna's Pocket Galaxy in hand as well, you typically want to hold on to the card draw until after the Pocket Galaxy. On the other hand, if you have not yet found the Pocket Galaxy, you want to draw as soon as possible.

Choosing your Conjurer's Calling targets well is important. If at all possible, you want to take value trades with the minions first and then transform them into random minions with the spell.

Another key aspect of playing the deck is choosing when to use your Puzzle Box of Yogg-Saron. It casts ten random spells from any class on random targets for an effect that resembles the pre-nerf Yogg-Saron, Hope's End. In general, you can expect the Puzzle Box to destroy some minions on either side and either draw cards or generate some random resources for you. Sometimes it wipes the entire board, summons minions for you, or even deals face damage to the opponent – I have been on the receiving end of 11 damage to face from a Puzzle Box. Then again, sometimes it heals the opponent and buffs their minions. It’s a surprise! The played win rate of the card hovers between 35% and 40%, which probably gives you some idea of how it works. It wins some games it has no business winning, but it is always a gamble. You should consider playing your Puzzle Box when you are behind on board, low on resources, or a little short of lethal with no clear path to victory in sight.

You are the control deck when playing against aggro decks. They will try to kill you before you get your powerful minions into play, or race you down when you do get on the board, before you can make good use of your board position.

In the early game, you need to stall the game. The Mage Hero Power already helps with that, and you also have access to cards such as Doomsayer that can be played on the board as such or combined with Frost Nova (or Blizzard a little later in the game). 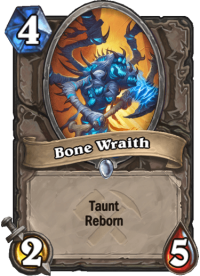 Other key early-game defensive minions are Bone Wraith and Arcane Keysmith – Keysmith can even give you some area-of-effect damage in the form of Flame Ward.

Ray of Frost is another flexible tool for the early game. If your opponent has an individual big threat, you can keep it frozen for a couple of turns with Ray of Frost. If needed, Ray of Frost can also remove small minions from the board, either alone or together with Frost Nova. If you only use the first part of the Twinspell, you do not even lose cards from hand, so your Mountain Giant does not become more expensive.

In addition to the purely defensive cards, you have a couple of other strategies available to you: First, you can try to get an early Mountain Giant on the board, and if it goes unanswered, you can cast Conjurer's Calling on it in an attempt to generate some Grave Horrors. If you have enough time to wait, you can try to combine them into a single turn to get two big minions on the board simultaneously. Just remember to Coin the Conjurer's Calling after the Mountain Giant, as Coining out a Mountain Giant has never turned out well. Second, you can try to get a fast Luna's Pocket Galaxy, and then hopefully find some discounted minions that help you turn the game around.

It can be hard for Big Spell Mage to defend against aggression, but there are multiple paths you can take to do so. The obviously defensive cards are one such path, but they are not the only one. Taking some beating early on and then swinging the game hard into your favor can happen. When you get a foothold on the board, you can also freeze the opponent’s board with Frost Nova or Blizzard and race them down. Always look for opportunities to win the game.

Against control decks, you are the aggressor. You cannot go to fatigue against Archivist Elysiana, but you have a large number of threats that you can ration on the board so that they are as awkward to remove as possible and so that you have more resources left to repopulate the board if it does get cleared. Even Control Warrior should run out of removal in hand – even if not in deck – as you keep generating new boards of threats, and it is the removal in hand that counts. Even if they have more answers left in the deck, if they either cannot find enough of them in time or if they cannot play enough of them in a single turn, your big minions are headed towards their face. 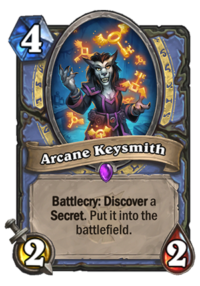 Luna's Pocket Galaxy plays a major role in your threat generation. It allows you to play multiple threats on the board against opponents who can only remove some of them or to turn a single minion into multiple minions with Conjurer's Calling on the same turn when it is played.

Arcane Keysmith takes on a new role in control matchups. Here, it can provide you with Counterspell or Splitting Image to protect your board, or a Mirror Entity to reinforce it should your opponent play a minion.

The key to control matchups is knowing what your opponent can do and how much mana it costs them to do that. Usually you play one threat after another, but if your board is properly protected and you know the opponent cannot deal with it in a single turn, you can also go all-in in an effort to end the game rather than let the opponent pick your board apart over multiple turns.

Big Spell Mage is an expensive deck and there is little you can do about that: most of the core synergy cards are Legendaries and Epics, and there are no cheap cards that have similar effects. For the most part, you can get by with missing a couple of pieces by slotting in some Astromancers, Naga Sand Witches, and Pyroblasts, although depending on what you replace, that may effectively turn the deck into a Freeze Mage, and change your strategy from big minions to five-mana Pyroblasts to the face.