All cards from Madness at the Darkmoon Faire have been revealed and in this article, I’ll take a look at what the future holds for Warrior!

Warrior has always had a good time in Hearthstone. Much of the time, Warrior has had multiple playable archetypes ranging from classic Control Warrior to tempo decks and even pure aggro. The upcoming Warrior cards in Madness at the Darkmoon Faire seem to keep this going and promise improvements to multiple Warrior archetypes! 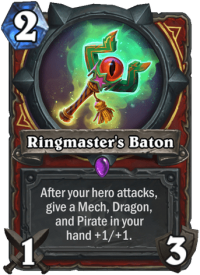 Handbuffs have not exactly been a stunning success for Warrior – it was attempted during Mean Streets of Gadgetzan – but there is some new handbuff support coming for Warrior anyway: Ringmaster's Baton, Feat of Strength, and Stage Hand all buff minions in your hand. While I’m skeptical about a pure handbuff list, there is some interesting overlap with Taunt minions with Sword Eater providing a new Pirate Taunt and Ringmaster Whatley delivering some The Curatoresque card draw for the class. You can expect to see Ringmaster Whatley around a lot in a wide variety of Warrior decks, including any upcoming Taunt Warrior lists.

Another major focus is Rush Warrior: E.T.C., God of Metal is ready to support some more aggressive Warrior archetypes, and there are plenty of other Rush synergy cards coming with Tent Trasher, Bumper Car, and Stage Dive ready to support a full Rush deck or just provide some Rush support to a more varied archetype.

Interestingly enough, the expansion was supposed to also provide new support for Bomb Warrior, but those plans were scrapped near the end of the design cycle: Minefield is now a cheap early-game removal piece instead of a Bomb-shuffling spell that it was originally conceived to be. Bomb Warrior was able to lift itself up without outside help during Scholomance Academy, so now we get some generic Control Warrior support instead.

Overall, the Warrior set looks solid: even if some of the pushed archetypes fail, many of the cards designed for those archetypes can also be used in other decks. Stage Dive, for example, can serve to tutor Kargath Bladefist, and Ringmaster Whatley can fit into just about any Warrior deck for card draw.

Taunt Warrior might finally have enough support to make a comeback! Between the old Into the Fray, Frightened Flunky, and Armagedillo and the new Sword Eater and Feat of Strength, playing way too many Taunt minions and buffing them up in your hand looks like a potentially successful strategy. 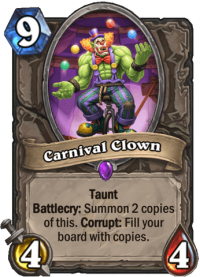 I drafted a couple of alternatives for Taunt Warrior because using Galakrond, the Unbreakable and its Invoke cards also seemed like a viable alternative. In the end, I decided not to go down that path and chose to use Carnival Clown instead. If you’re able to buff Carnival Clown while it is in your hand, you can get some big Taunt minions on the board, and if you are able to Corrupt it with N'Zoth, God of the Deep or Scrapyard Colossus, you’ll have a whole board of them.

There are still plenty of open questions when it comes to Taunt Warrior. How much of a control deck is it? I considered using cards such as Brawl in the deck, but ultimately opted to go with a lot of minions and a pair of Coerces for hard removal. The more control-oriented route may still be the one to prevail, it needs to be tested. I also considered two copies of Ringmaster's Baton – as well as no copies of it – but ended up with one Baton and one Ancharrr, which tutors for Sword Eaters and Circus Amalgams.

N'Zoth, God of the Deep seems ideal for Taunt Warrior, as it is able to resurrect a sweet Taunt wall: a Pirate (Sword Eater), a Mech (Scrap Golem or Tomb Warden), a Dragon (Evasive Drakonid), a Beast (Armagedillo), and an Elemental Scrapyard Colossus), with the pair of Circus Amalgams filling in any missing spots or posing as Totems.

If you’re playing an aggro deck, the endless Taunt walls of Taunt Warrior can become extremely frustrating to push through.

Rush Warrior is being pushed hard in Madness at the Darkmoon Faire. E.T.C., God of Metal promises to turn your Rush minions into face-damage dealing monsters, at least for one turn – and yes, it works with Animated Broomstick too. However, when E.T.C. is not around, how do you deal enough damage with your Rush minions? 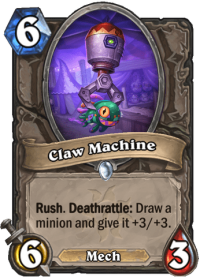 Ringmaster Whatley seems too good of a card-draw tool to leave out from this Warrior deck either, and I also look forward to seeing what Stage Dive and Claw Machine can do. Both cards seem really good to me, but I have not had a chance to test them yet: Stage Dive is super easy to Corrupt, and then it tutors a nicely buffed Rush minion, while Claw Machine looks like a sweet cantrip: it hits the board, removes some threat, and draws a buffed-up minion. You cannot ask for much more if its six Attack proves to be a good fit with the meta.

I have two main questions when it comes to Control Warrior:

I recognize the strength of Risky Skipper, but I also want to experiment with something else for a change as we have seen so many Risky Skippers throughout the year. I think this deck could have enough armor generation to survive even without the combo, and if that is indeed possible, it frees up a lot of space in the deck. 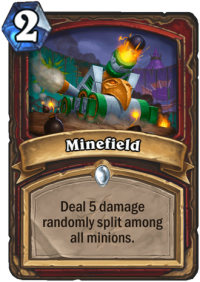 The more I think about Minefield, the more I like the card. In the early game, removing five Health from the board often means a board clear, and it can happen regardless of whether the board consists of 1/1 tokens or a pair of 3/2 minions.

This Control Warrior list also includes a small Rush package: Stage Dive tutors for Rush minions, and there are four in the deck: Kargath Bladefist, two copies of Claw Machine (more card draw!), and an Evasive Wyrm. It is possible that a smaller package is optimal to ensure tutoring for Kargath Prime later in the game, but I want to test it and see how it goes.

Ringmaster Whatley is here, too. It just seems to fit most of the Warrior decks.

How many Old Gods can be played in a control list? I’m sure some people will try all four, and I can see an argument for three – I would love to have N'Zoth, God of the Deep here, but I have chosen two Old Gods for this particular list: C'thun, the Shattered and Yogg-Saron, Master of Fate. C'thun, the Shattered can end the game after you have cleared the board enough, and the spells generated by it also help to feed Yogg-Saron, Master of Fate, which can be used as a get out of jail free card and possibly one of those board clears. I believe these two are the strongest options for Control Warrior right now, and putting in more ten-mana cards could result in some completely dead hands and make it too hard to survive. Time, and testing, will tell.

I am curious about the state of Highlander Warrior. We have not seen the archetype around that much in Scholomance Academy, but in theory, this should be the best time for Highlander decks to shine: it is the last expansion of the Standard year and there are more cards available in the format than ever before. More cards mean easier choices when it comes to substitutes, as you can choose your replacements from a wider pool. 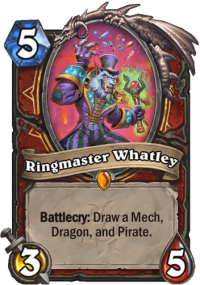 However, regular Control Warrior decks already use Zephrys the Great as a late-game card even though it is a dead card for them for much of the game, and I’m not sure whether Dragonqueen Alexstrasza can compete with the Old Gods that seem set to become the new late-game win conditions.

With this Highlander Warrior list, I’m trying to make use of some Dragon synergies and also pack in some resource generation in the form of Cobalt Spellkin and Onyx Magescribe. With people running Old Gods in their decks, there is a Hecklebot that can grab them harmlessly out of the deck, at least sometimes.

Warrior seems to be in a good position going into Madness at the Darkmoon Faire. The class has a good set of control tools right now and the new Old Gods provide control decks with some powerful win conditions that Warrior will certainly make good use of. Taunt Warrior may be able to return to the meta and it will be interesting to see whether Blizzard’s push for Rush Warrior has been enough: my best guess right now is that Rush Warrior will not be a meta deck, but I have higher hopes for Control Warrior and Taunt Warrior.

All in all, it is good to be a Warrior in Hearthstone. Then again, it always has been.