Hunters are the survival experts. Armed with their bows or rifles, they wander around the forests and jungles, looking for their prey. But they don’t just kill any creature encountered – Hunters have a deep connection to the nature and try to keep the right balance. They don’t want to disrupt the natural circle of life and death – they want to be a part of it. Instead of killing an animal, a Hunter often prefers to befriend and make it his companion, sometimes for life. Hunters utilize the specific powers of different animal companions to excel in the combat.

Even though bows and rifles are their weapons of choice, they aren’t afraid of the close combat. Masters of stealth and traps, they often ambush their opponents and take them down with attacks inspired by the various wild animals. Most of the Hunters have also learned how to imbue their arrows with magic, being able to snare, poison or even set their foes on fire with the various shots.

In Hearthstone, the Hunter class is represented by Rexxar. Players can also unlock an alternative, cosmetic Hunter Hero – Alleria Windrunner. 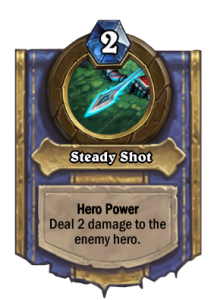 Hunter’s Hero Power is Steady Shot. After using it, Hunter deals 2 damage to the opponent. It’s the most aggressive Hero Power in the whole game – instead of gaining health, or being able to interact with the board, it simply deals damage. But at the same time, it’s the most powerful Hero Power if your intent is to kill the enemy as quickly as possible. Since Hunter is able to deal 2 damage per turn without using any other cards, the Hero Power often becomes its main win condition in the long game.

Secrets are one of Hunter’s unique mechanic. While two more classes have their own Secrets, they vary significantly. The Hunter class offers a choice of traps for almost any situation. Secrets are very different than normal spells, in a way that it’s the opposing player who is in control of activating them. Hunter Secrets are very powerful, because even though they only cost two mana each, their actual effects are worth somewhere between three or four mana (depending on the Secret). On top of that, your opponent doesn’t know which Secret you’ve just played – of course it’s possible to make an educated guess, but it can be very hard to play around everything. What’s stopping them from being too strong is the fact that it’s your opponent who is in control of activating them. When accounted for correctly, their value is greatly diminished.

For example, one of the most common Secrets – Explosive Trap – is very similar to Consecration in how it works. The only difference is that it costs two mana less and you are not the one who activates it. So if your opponent doesn’t play around it and attacks your Hero while while having multiple small minions on the board, the card’s value and tempo is really high. But at the same time, if it isn’t activated all of the minions traded away first, the card might have very low impact.

On top of the Secrets, Hunters have some cards that synergize with them. Eaglehorn Bow gains more Durability each time the Secret is revealed, Cloaked Huntress lets Hunter play the Secrets for free (instead of paying 2 mana for each) as long as it’s on the board, while Professor Putricide doubles up on any Secret played.

There are also some ongoing themes in the Hunter cards. When new cards are released, there is a significant chance that some of them will fall into one of those categories:

Here are the Hunter decks you can use on the ladder in the current meta. While not every deck listed here is high tier, they all should be viable options, especially to climb through the lower ranks.

Midrange Hunter is one of the oldest archetypes in Hearthstone, dating back to early 2014 when people first realized how strong Savannah Highmane is. The deck has gone through dozens of changes since then, trending towards Beast synergy as time went by. Mean Streets of Gadgetzan’s meta wasn’t too friendly for Rexxar as Hunter was the least popular class. Journey to Un’Goro made it a bit more viable again, but as time went by Hunter experienced a slow decline throughout the expansion, and Hunter remains one of the bottom classes in early Knights of the Frozen Throne.

Midrange Hunter did not gain much from Knights of the Frozen Throne. While its Legendary Hero, Deathstalker Rexxar, is worth including in the deck, it does not have the power some other Hero cards have. Bearshark is nice, and Bonemare fits in a Hunter deck as well as almost any other class, but Hunter did not gain anything spectacular.

The boost the class received from Journey to Un’Goro, gaining two extra early-game minions in Jeweled Macaw and Crackling Razormaw and the rotation of its nemesis Reno Jackson out of the Standard format with the Year of the Mammoth, was much more pronounced.

Face Hunter is one of the original archetypes of Hearthstone. Hunter has a Hero Power that deals damage to the opponent’s Hero, nothing else, so the logical conclusion is to support that Hero Power with cards that also deal damage and simply race the opponent down.

For a long time, Face Hunter was a feared deck, able to push damage over time and win the game. The defending deck would try to hide behind Taunt minions, but the Hunter Hero Power and Kill Command were merciless predators, able to wither down the opponent over the course of multiple turns.

As time went on, the relative power of Face Hunter declined. New, faster aggro archetypes surfaced with Pirate Warrior and Murloc Paladin, and Aggro Druid became a thing with Innervate launching powerful attacks way too soon. Face Hunter with its simple two damage per turn Hero Power and low-health Charge minions was laughed at by the huge boards and powerful weapons wielded by other aggressive decks.

However, Kobolds & Catacombs have put “Face” into the “Face Hunter” again – with more early game options, including an easier way to run the Pirate package, the deck is viable again. Even though it’s not high tier, it’s possible to hit higher ranks when playing it.

Spell Hunter is a new archetype introduced with the latest expansion, Kobolds and Catacombs… or is it? While the 100% spell Hunter without a single minion was never played before, we already had two Hunter decks notorious for running mostly spells. Those decks were Yogg & Load (which played Yogg-Saron, Hope's End and possibly few other minions) and Barnes/Y’Shaarj Hunter, which, like the name suggests, used only Barnes + Y'Shaarj, Rage Unbound, so the first one would always pull out a 10/10. Neither of those decks were top tier, but they both had their moments on the ladder.

The version of Spell Hunter I’m featuring in this guide runs no minions at all, but the Barnes + Y’Shaarj version is pretty much as good. The minion version relies more on high-rolling and drawing perfectly (because T4 Barnes into Y’Shaarj is nearly an auto-win), but it suffers from the consistency issues – drawing Y’Shaarj first, not drawing minions at all while having Rhok'delar in your hand etc.

The general strategy of the deck doesn’t really change much, so the guide should be relevant for both playstyles.

If you’re a new player without a big collection, you might be looking for a way to play Hunter without spending a lot of your Dust on the Legendaries.

This deck is a basic Midrange Beast Hunter. It’s a rather aggressive deck that mostly focuses on the early and mid game. Hunter’s Hero Power naturally works better in decks that want to put pressure on the opponent, and that’s exactly what this deck tends to do. It’s faster than most of the Basic decks, running only two copies of Boulderfist Ogre as the late game (which you would ideally want to switch for Savannah Highmane). Most of the Basic Hunter cards have synergy with Beasts, so that’s where the deck is heading towards – mid game and Beast synergies.

It’s a good Basic deck choice if you prefer a more aggressive play style. Thanks to the lower curve and Hero Power that deals damage, you’re going to close out the games faster than with the other decks. At the same time, Hunter’s Hero Power is generally inferior to some of the other ones, as it has no board impact at all. Luckily, that downside is not huge and given the quality of some of the Hunter’s Basic cards (like Houndmaster, which is a powerhouse), the deck can still get a lot of wins.

Midrange Hunter is one of the oldest archetypes in Hearthstone, dating back to the Classic game, when people have realized the power of some of the Hunter cards (like Houndmaster or Savannah Highmane). Even though the deck is classified as Midrange, due to the class’ Hero Power, it was always one of the most aggressive among them. The goal is to play proactively on the board, drop the best minion every turn up to Turn 6-7 and then try to finish the game with burn damage and Hero Powers. Of course, the perfect plan doesn’t always work out, and you have to adjust your play style depending on the matchup, but having a good mana curve is always the most important thing.

In the early Knights of the Frozen Throne meta, Midrange Hunter wasn’t looking too good. However, it has got much better after the nerf patch, with its biggest enemies like Pirate Warrior or Token Druid getting hit hard. Right now it’s a solid deck – it’s viable at all levels of play.

On top of that, it’s a great budget deck choice. Actually, the budget deck is not that much different from the real deal. The biggest differences are the lack of Kindly Grandmother (which is from Karazhan) and Deathstalker Rexxar (which is a Legendary, but it’s not absolutely necessary). Well, there might be smaller differences in tech choices, e.g. both Hungry Crab and Bittertide Hydra are Epic cards, but they’re both just techs that can be easily replaced. However, this budget version is absolutely capable of getting to higher ranks.

Every 2 levels, up to level 10, you will get two copies of a Basic class card. A lot of those cards are staples, so it’s heavily advised to highly prioritize getting every class to level 10.