Our Spell Hunter deck list guide will go through the ins-and-outs of the most popular Hunter build from The Boomsday Project! This guide will teach you how to mulligan, pilot, and substitute cards for this archetype!

Hunter has always had a heavy reliance on creatures, particularly beasts, as part of its class identity. Face, Hybrid, and Midrange Hunters all thrive off of the strength and efficiency of their creatures, backed up by versatile spells. Secret Hunter had a brief moment in the sun, but secrets themselves lack “oomph” in the late-game. Hunter has a tendency to empty its hand quickly, with no real way to replenish those expended resources (the exception being one-for-one effects like Stampede or Lock and Load that replace spent cards, with obvious downsides). The release of Deathstalker Rexxar gave Hunters a reliable way to generate cards as a late-game engine with the Zombeast hero power. Combine this with the explosive potential of the Lesser Emerald Spellstone and spells-matter Rhok'delar, and we have a spicy combination that took Hunter into a completely different direction.

Kobolds & Catacombs version of the decks opted to run the Barnes + Y'Shaarj, Rage Unbound combo. It was very simple – playing Barnes on T4 (which you hard mulliganed for) resulted in him pulling the 1/1 version of Y’Shaarj (since it was the only other minion in your deck), which pulled the 10/10 version – that was an instant win in lots of matchups. However, since the combo has rotated out, Spell Hunter had to go back to the more “fair” card choice – To My Side!, which isn’t a bad card, it’s just not a massive swing like Barnes is.

While the deck wasn’t initially very popular, because it had a bunch of bad matchups, it’s now the most played Hunter archetype on the ladder. Between the fact that it didn’t get nerfed at all, and the fact that some of the bad matchups are gone, it is now a solid choice to ladder with.

We’ve listed a popular version of Spell Hunter below, we’ll be updating the guide soon!

Aggro matchups are all about the proactive board control. The thing about Spell Hunter is that it doesn’t really have a good AoE clear. Explosive Trap is efficient, but 2 damage is often not enough against aggressive decks. For example, when you play versus Tempo Mage, the card might be almost useless, as most of their small minions have 3 health (Mana Wyrm, Arcanologist, Kirin Tor Mage). Of course, Explosive Trap is still good against Aggro, it just isn’t enough to win. 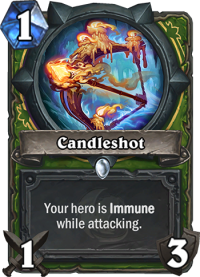 What you need most are the weapons and ways to generate minions. Weapons are great, because they’re tempo efficient. You play it once and you can kill up to a few minions with it. Candleshot is great during the first few turns – it’s most useful for clearing 1-drops, but things like popping Divine Shield, finishing a minion off after it’s down to 1 health etc. also make it good. But when it comes to pure, mid game board control, Eaglehorn Bow is one of the best tools. With the amount of Secrets you have, you’re often going to swing with it 3 or 4 times, increasing its potential heavily.

Then, there are spells that summon minions – those are also quite important. Since you have no other ways to get minions, you really want cards like Wandering Monster, Animal Companion or Lesser Emerald Spellstone / To My Side! (in the mid game). Those cards are, most of the time, very mana efficient and can help you contest the board.

Aggro matchups are all about surviving. You want to clear everything they play and run them out of resources. The only exception from this rule is when you manage to get a big board swing. Aggro decks generally don’t run AoE board clears, which means that if you managed to keep up with them and then drop an upgraded Lesser Emerald Spellstone (which summons 4x 3/3), now you will be ahead and he will be behind. 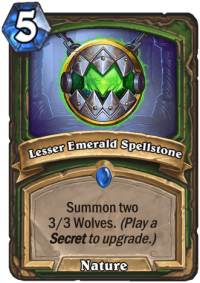 If you’re at reasonable health total, you can switch your game plan to aggression. Clear only the highest priority minions (such as Knife Juggler), and let your opponent do the rest of the trades. Especially if you can follow it with To my Side – then pretty much no Aggro deck will be able to withstand that much pressure. Those decks also don’t run cards that heal them, so the damage you deal is usually permanent – they CAN drop a Taunt or two, but you should be able to get through them quite easily and kill them over two-three turns.

Even though Deathstalker Rexxar seems mostly like an anti-Control card, it’s actually often the best way to comeback against fast decks. Between some Armor gain and 2 AoE damage, you should often be able to use it in order to survive. Then, there is a pretty high chance to get either a Taunt or a Lifesteal minion to just seal the game. The Witchwood has made this card even better in the fast matchups. Thanks to the cheap Lifesteal minions and a Rush keyword (cards such as Swamp Leech, Vicious Scalehide and Hunting Mastiff), it’s much easier to get a “fast” minion from it, potentially something with Lifesteal. For example, something as simple as combining the Scalehide with a Bloodfen Raptor gives you a 4/5 minion with Rush and Lifesteal – a great way to quickly clear something on the board and regain some health in the process.

Slow matchups play way, way differently than the aggressive ones. Against fast decks, you assume a Control role (unless you get the big tempo swing I’ve talked about). You need to defend yourself and run them out of resources. But not against Control decks – here the strategy is quite the opposite. One of the biggest mistakes people make when playing Spell Hunter is always playing it as a Control deck. Even though most of your cards are reactive, you are NOT a Control deck. You run out of cards quickly, you have limited ways to gain extra value and you want to finish the game off as quickly as possible. You can not outvalue a Control deck in the long run – the only way is a very early Deathstalker Rexxar, but that has its downsides too. As a matter of fact, a lot of the time it’s just better to keep your 2 damage Hero Power if you’ve put enough early/mid game pressure (so you can keep dealing damage) and turn into a Death Knight only when you’re sure that you won’t beat your opponent that way. 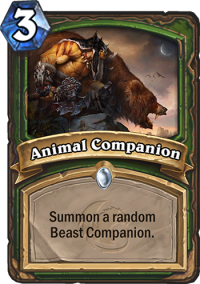 Even though you’re playing a Spell Hunter, minions are still your main win condition. You want to summon as many of them and deal as much damage as possible. That’s why, for example, rolling a Huffer from Animal Companion is so good. Not only you’re getting 4 guaranteed damage, but you also have a 4/2 minion on the board you can attack with again if your opponent doesn’t answer it. Try to keep your minions alive and use spells to clear the board. For example, instead of trading into something, you’d rather Flanking Strike it or Hunter's Mark is (and then finish off with e.g. a weapon). Unlike spells, minions provide repeated damage every turn.

Your most common way to win the games will be Spellstone. You don’t want to play it until you upgrade it at least once, so you get three of four 3/3’s (unless you really have nothing else to do and 2x 3/3 is your only T5 play). After playing it, you just hope that your opponent has no AoE. For example, Duskbreaker is your worst enemy, but you can’t really do anything about it. You just need to not play into it. Your opponent is often waiting for you to play more before AoE’ing. If you already have a 4/2 on the board and your opponent passes while not really doing anything, there is a high chance that he has AoE and he wants to bait you into playing Spellstone too. Don’t take the bait and just hit with the 4/2, possibly play some Secret/weapon and go face + Hero Power. I’ve had Warlocks who baited me to play into Hellfire, and then they were forced to Hellfire that single minion next turn, since they had no other way to clear it.

Rhok'delar is your only real way to immediately refill, but it’s GREAT at that job. You ideally want to play it on the curve, when you’re almost out of cards. While some of the random spells are quite useless (e.g. Stampede), most of them will be useful. You can get another Spellstone, more Secrets, more removal, burn damage. You should be able to go all in over the next few turns without really running out of steam. You also can’t underestimate the 4/2 weapon – since you’re often pushing your opponent, 8 extra damage is very important. 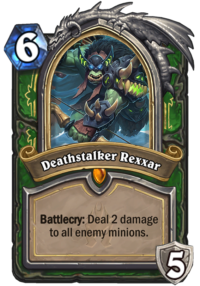 Alternative win condition is Deathstalker Rexxar. However, keep in mind that this is a pure value card and it doesn’t really fit into your aggressive game plan, if you were performing one. I’ve seen people playing him as soon as they could, on the curve, against a slow deck, but that’s not always correct. If you had a solid start, or you’ve somehow dealt quite a lot of damage early, your first game plan is to rush the slow deck down – and for that, your normal 2 damage Hero Power is much better than the Deathstalker’s one. DO NOT change into your Death Knight if you can still maintain the pressure, there is just no point. If you can choose between dropping To my Side and using Rexxar, drop the first one unless you’re behind on the board and the 2 damage AoE will matter.

Deathstalker Rexxar is a good play once you know that you won’t be able to pressure your opponent enough. For example – they are still at high health, they’re close to their key turn (like Frost Lich Jaina vs Mage or Bloodreaver Gul'dan vs Warlock) and you won’t be able to take them down before that, you’re running out of resources etc. Then it’s the time to play Rexxar. After you do it, try to Hero Power every turn to fill your hand with a bunch of different Zombeast. One of the common mistakes is being greedy and picking the biggest options. Sure, you can make only 6+ mana Zombeasts, but you will very soon notice that they’re clunky and you can’t reliably get them out of your hand. While going for one or two high value ones is not bad, your main goal should be getting Zombeasts in the 3-5 mana range. The reason is that you will be able to Hero Power, drop the Zombeast and still have some mana to e.g. play a Secret, weapon, Kill Command etc. Tempo is still very important, that’s why you ideally want to pick Beasts with some kind of immediate effect. Battlecries, Charge and Rush minions are good picks, because you’re doing something immediately the moment you drop them.

With only two Legendaries and two Epics, Spell Hunter is a rather inexpensive deck. However, all of those cards are important and replacing them will turn this already off-meta deck into something very weak.

But if you really need to replace one of those cards, you can go for some other Hunter spells, such as a second copy of Grievous Bite, Deadly Shot, Arcane Shot, Snake Trap or Crushing Walls. I don’t think it makes much sense, but it’s your call.