Learn how to play this archetype with our Midrange Hunter Deck List Guide.

Our Budget Midrange Hunter deck list guide for Rastakhan’s Rumble expansion will teach you how to play this budget list. This guide includes Mulligans, Gameplay Strategy, Card Substitutions, and Combos/Synergies!

This current version even with budget only cards can easily make it to rank 10, but when you get some practice with the deck can get to rank 5 which is a more realistic goal than Legend. Why is it not important to get to Legend? The rewards are nearly exactly the same at the end of the season, and other than bragging rights you get only a card back. Budget players will find Hearthstone far more enjoyable if they don’t see Legend as their only goal.

With the new expansion Midrange Hunter got a few new cards to consider, but mostly it got an awesome new 1-drop with Springpaw!

You really want minions, so while Candleshot is good in the early game it should only be kept when you have another 1-drop already (unless you’re up against Odd Paladin). Dire Mole is your main target and should be kept every time. Springpaw should be kept if you don’t have Dire Mole or if you have Scavenging Hyena. Keep Crackling Razormaw because it’s battlecry is essential to your early game power, but I wouldn’t keep Scavenging Hyena unless you have a 1-cost Beast you can play turn 1 to trade off and buff it immediately. If you have a 1-drop (and coin), a 1-drop and a 2-drop, or you have two 2-drops (and coin) you can keep 3-drops like Animal Companion or Eaglehorn Bow.

Holding onto the board early in the game and pushing damage is your main objective as a Midrange Hunter player. You should be making good trades early in the game, but once turn 5 – 6 comes around you will need to flip the switch to aggression, as this deck doesn’t have much in the way of comeback mechanics. Every single point of damage counts because your hero power makes it so your opponent can’t hide behind Taunt minions when their life gets low. This is another key to Midrange Hunter, slipping in hero powers whenever you can. Count your mana, can you fit in a Hero Power if you play cards in a certain way? If so, it’s usually right to do so. 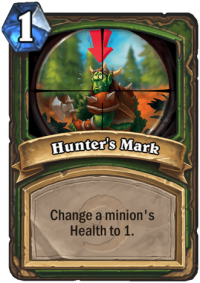 Hunter's Mark is in this deck because we don’t have any way to deal with big Taunt minions. However, if there’s a chance to take out a minion early that will allow you to hold onto the board or make a tempo play that protects one of your beasts then it is usually best to just use it. This choice comes down to knowing what kind of deck your opponent is playing and usually takes some practice.

Springpaw adds a second 1-cost Beast to the deck, which it really needed. Not only does this double your chances to land the coveted 1-cost Beast into Crackling Razormaw combo, but it also combos really nicely with Scavenging Hyena. Much like Unleash the Hounds, Springpaw gives you a way to buff your Hyena immediately even if you had an empty board.

While Kill Command is a great finishing card, it is also a great card for eliminating higher health minions. You would almost always rather use a spell to remove a minion than use one of your minions. A minion represents multiple turns of damage, whereas a spell is only used once.

You might be looking at Eaglehorn Bow and the lack of Secrets and wondering why it’s in the deck. Eaglehorn Bow allows you to take out minions and keep your minions alive. This is very important because you have minions that want to be buffed by cards like Crackling Razormaw and Houndmaster. Your health total is largely irrelevant as long as it isn’t zero. In the early game, it is rarely a good idea to just go face with your weapon. Save both durability charges for taking out minions or at least softening them up so you can use one of your smaller minions to finish them off.

Tundra Rhino is very strong on an empty board and all right for making a quick trade. It is especially good if you have a Savannah Highmane to follow it up with. If you want to get fancy, you can trade your Savannah Highmane with this on the board, and then attack with the two 2/2 Hyenas afterwards. This is a bit of a fringe scenario, but is useful to know.

Savannah Highmane is jokingly considered Hunter’s best Legendary minion. It’s obviously not a Legendary, but the power and effect it has is comparable with some of the better Legendary cards in the game. The bonus is that it’s cheap and you get to have two of them in your deck. If you have an opportunity to safely attack your opponent’s face with Savannah Highmane it usually means you are going to win the game.

At the moment this deck doesn’t directly translate into another version. Popular hunter decks are Deathrattle Hunter, Recruit Hunter, and Spell Hunter. All great decks, but they don’t share a lot in common with this one, and they have several Epic and Legendary cards that are core to their success.

For a version of this deck that can be upgraded into a meta deck you could add a Secret package. This would include Secret Plan, Explosive Trap, Freezing Trap, Wandering Monster, and Lesser Emerald Spellstone. These are all Common and Rare cards that make up much of the core of Spell Hunter. All you would need after is Rhok'delar, Deathstalker Rexxar Zul'jin and two To My Side! to finish the deck.

If you want to experiment with some new cards, Headhunter's Hatchet, Spirit of the Lynx and Untamed Beastmaster all have some potential. Headhunter’s Hatchet, as a 2-mana 2/3 weapon, is actually pretty good value, but 2-damage weapons tend not to make the cut a lot of the time unless they do something else. Early game there tends to be a lot of 1 and 3 health minions, which leaves Hatchet either excessive or falling short. Three charges is really good, but you already have Candleshot for that. Not only does it not require you to stick a 1-drop Beast on curve to get all three charges, but if you fail to hit one in your mulligan you can play it instead. Spirit of the Lynx can be fun if you can play it with things like Unleash the Hounds and Springpaw, but this is a tempo deck and playing a 0/3 non-Beast on turn 3 tends to be bad. Untamed Beastmaster could be really strong if he sticks around for a turn or two, but he is also not a Beast and on turn 3 you’d rather play something that gets value from Houndmaster.

Deathstalker Rexxar is the #1 best upgrade to this deck, as all on his own he gives you infinite late-game value. If you want to play any competetive Hunter deck Rexxar should be your first non-budget craft, and if you don’t play Wild this is your last chance to play with what is considered by many to be one of the most fun cards the game has ever seen.