Our Mind Blast Control Priest deck list guide goes through the ins-and-outs of this popular deck from The Boomsday Project expansion! This guide will teach you how to mulligan, pilot, and substitute cards for this archetype!

“Priest loses so many important cards with the upcoming rotation!”: That statement was heard quite often in the last few weeks, and combined with the newly revealed Priest cards, the lion’s share of the community pronounced Priest’s future in the Year of the Raven dead.

Maybe in this case the wish was the father of the thought due to the dominance of the class in the second part of the Year of the Mammoth; but after all, Priest seems to be more than alive and well. Spiteful Priest was the obvious choice for most players at the start of the expansion, but another once famous archetype that we’re going to take a look at is on the rise yet again: Mind Blast Control Priest.

We’ve listed a popular version of Mind Blast Priest below, we’ll be updating the guide soon!

On first sight, this deck might seem to be kind of all over the place in the chaotic meta game of the first few weeks of Witchwood. However, the combination of the best Priest cards in the game makes this deck a true meta-breaker in the best possible way. Looking at the statistics of admittedly moderate sample size, Mind Blast Control Priest has beaten the most played decks (Odd Paladin, Odd Hunter, Cubelock, and Tempo Rogue) pretty convincingly.

With the new patch, many important matchups will become way more favorable, and the deck as a whole will perform even better both in competitive and casual play. If you want to read more information about specific matchups, please don’t hesitate to scroll down to the Matchup section. 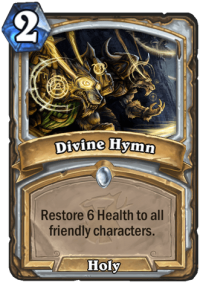 Now to the actual list: First of all, we have the card draw engine that includes Northshire Cleric, Wild Pyromancer, Power Word: Shield and a new addition called Divine Hymn. One of the strongest upsides of this group of cards is the fact that it also serves as a great way to clear the board early; Shadow Visions and Mind Blast can help in that regard as well. The amount of board clear in total makes this archetype a great match against the Aggro lists that currently try to break greedy control archetypes.
Acolyte of Pain finds a place in more and more lists as the new Standard year goes along, and rightfully so: It can pick up a lot of value against Paladin and other archetypes that rely on cheap minion pressure; it also may be the “most included card after various iterations” in all of Hearthstone’s control archetype. The amount of greed only increases with the evolution of the meta-game at the time, and the inclusion of this card showcases exactly that.

The dragon package suffered heavy losses with the rotation, but still kept important cards like Duskbreaker, Twilight Drake and Primordial Drake which help to survive into the later stages of the game. Alexstrasza may look like a random include, but serves one particular purpose: To defeat the mighty Cube Warlock. This will be discussed further in the Matchup Guide section.
One of the more powerful cards of the earlier iterations, Scaleworm, has seen less and less play recently. Reasons for that may be its mediocre performance against Aggro, and the refinement of the archetype itself towards a more draw-heavy solution.

Acidic Swamp Ooze is having a field day in basically every control list at the moment. Paladins alone use three to five different weapons, Hunter uses at least two as well. Our dear friend Harrison Jones has been cut from most versions of this list recently, just because other cards have way more consistent performance. The fact that Cube Warlock has been sent to the nether with the recent balance patch justifies the cut as well. 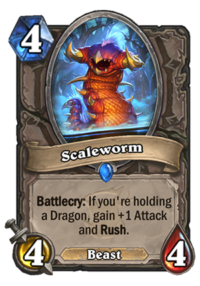 One or two copies of Shadow Word: Death try to handle early Mountain Giant aggression and Spiteful Summoner high rolls, something that many control lists still struggle with. Newer versions seem to run Twilight Acolyte instead of SW:D, which is fine as well but always less reliant against early threats.
When all the floodgates open eventually, Psychic Scream and Shadowreaper Anduin are ready to remove ridiculous board states to save enough time to get to the win condition of this deck.

The “curve ball” in this list is Mind Blast. 10 damage for 4 mana may still be the best face damage per mana distribution in the whole game, and we don’t even need cards like Prophet Velen to make it work. Shadow Visions alone can produce up to four copies, and Alexstrasza does all the dirty work up to 15 health anyway.

A very weird addition that finds its way into more and more lists is Holy Fire, but the fact that it can add additional reach against heavy Armor archetypes like Taunt Druid oder Quest Warrior can make it worthwhile in the long run.

The archetype of Mind Blast Priest turned from a sleeper deck into one of the most played lists on ladder on all ranks. The patch favors Priest as a whole even more, and if you know how to play specific matchups, nothing can stop you!

You want to beat Cube Warlock more consistently than any other list? Play Mind Blast Control Priest. Playing this matchup, however, is surely not a walk in the park. It is key to know when to pull the trigger on specific cards. Alexstrasza for example is part of our “combo”, so playing that on curve does absolutely nothing since Cubelock can just heal back up to full life in a heartbeat. It really is a game of attrition, and having Shadowreaper Anduin in hand early is almost mandatory to be able to put out enough damage before playing Alex eventually. Bait out as many heals as possible, try to get additional Mind Blast copies, and don’t use your Mass Dispel too early. And by the way: If you get confronted by a random copy of Rin, the First Disciple, be sure to Silence it as quickly as possible, because that is one of the very few ways to lose if played on curve.

History doesn’t change, and that applies to Control Priest versus Aggro Paladin. Wild Pyromancer alone carries you through the early game, and if you don’t draw one, you should at least get Northshire Cleric for early board contesting or Duskbreaker for the heavy board swing on turn 4.

Don’t underestimate their ability of reloading the board, and choose wisely when it comes to board clear. If you play the board correctly you will almost always come out ahead, and Psychic Scream or Primordial Drake will seal the game eventually.

Basically the same game plan as against Odd Paladin. Don’t be afraid to neglect your life total at the beginning of the game, because Divine Hymn or Shadow Visions will almost always be in your back pocket. Use your Hero Power to make value trades and to keep the board presence.

This matchup can become very hard. The mix of singular threats through Build-a-Beast and lots of 3/3 wolves makes keeping the board clean a herulian task. Mulligan HARD for Duskbreaker if you want to maintain a lead into the late game! This is the single-most important card in the matchup.
Try to maximize your value cards, play Pyromancer only when you can clear the board with it, and Northshire Cleric only when you can draw cards with it the very same turn.

Many opponents will think that you are playing a Spiteful Priest list, and that helps you a ton in the matchup against Rogues. They will try to build up a big Edwin early on, and you will eat it up with Shadow Word: Death. The rest of the matchup plays out as easy. Scaleworm is the answer Priest needed against Fal’dorei Strider, so even more value-oriented Rogue archetypes will have trouble to compete in the mid game.

Spiteful Druid: EVEN TO UNFAVORED

As we all know, Spiteful Summoner’s rolls have become increasingly better due to the rotation of the Old Gods, and that is why this archetype can high-roll you out of the game in a heartbeat. The combination of Prince Keleseth and copious amounts of cheap minions that have more than 3 health can become too much from time to time. The deck also has a lot of defensive capabilities, and Armor is the bane of every combo-based Alexstrasza deck. Try to go in as early as possible, get your Scaleworm on the board, and pray.

In my opinion, this is one of the most fun matchups of Mind Blast Priest. It really can go both ways every time; your Duskbreaker can deal with all of their minion threats at once, but well-timed Counterspells and Explosive Runes can cost you the game. Besides that, destroying Aluneth with your Ooze feels incredibly satisfying and will most likely win you the whole match.
Try to focus on board control as much as possible, use your Health as a resource. This can backfire of course, but normally Shadow Visions and Divine Hymn should keep you out of lethal range for a long time.

You know what’s as bad as Armor for our list? Lifesteal, and Frost Lich Jaina has plenty of that in hand. In this matchup you basically need to hard-mulligan for Shadowreaper Anduin so that you can apply pressure as early as possible and before Jaina gets drawn. You have to go wide on the board as well, because the board will stay clear all of the time anyway. The matchup against more value-oriented Elemental Mages without that many board clears is much better.

Odd Rogue can dish out tons of early damage due to their upgraded Hero Power and cards like Hench-Clan Thug. Try to not play greedy with your board clear, because this archetype tends to not have as many board refill compared to other Aggro archetypes.

Control Priest always had a hard time against Shaman, just because it has no way to deal with huge amounts of cheap value minions over and over again. Even Shaman has more than enough of that, and the fact that those Totems can turn into legit threats in the mid-game thanks to Flametongue Totem or Dire Wolf Alpha. The only hope in this matchup is to draw Pyromancer every time; other than that, Duskbreaker needs to carry into the late-game where Anduin and Mind Blast could do enough damage while removing their board over and over again.

On paper these are the worst matchups for Mind Blast Priest. If played correctly, running out of Armor is not an option for both decks.
However, if your opponent doesn’t know what he’s up against, these games can turn into skill-based matchups really quick. Even in Legend ranks, lots of players still play too greedy instead of leaning back and just ramping up Armor over and over again. Sadly, both the paper and the real match is lost if you don’t draw Anduin early enough.

Shadow Word: Death: Depending on the meta, you can only run one copy of SW:D, but at the moment it’s just too good against Mountain Giant and Spiteful Summoner. A healthy alternative of course is Twilight Acolyte.

Chameleos: Many variations of this list run Chameleos, and in a more control-oriented meta, this card can spy out a lot of vital information and create great value.

Prophet Velen: This card actually does nothing in terms of additional reach within a single turn, just because it has to stick to the board for at least one turn.

Spirit Lash: A lot of lists run this card, especially if you can’t afford a second copy of Psychic Scream; it adds good board clear and healing, especially combined with Pyromancer.