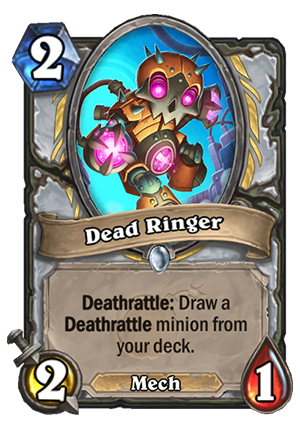 Deathrattle: Draw a Deathrattle minion from your deck.

When you look at this card, the most obvious comparison would be Loot Hoarder. 2 mana 2/1, draws a card on Deathrattle. However, generally speaking, drawing SPECIFIC cards tends to be stronger than drawing cards in general, for a few reasons. It’s more consistent, you can guess what you will draw more consistently, it helps with the synergies etc.

So the first and most obvious candidate for this card is any kind of Deathrattle Priest. If you play a Deathrattle build, no matter if it’s a Quest Priest or maybe some Midrange deck with Coffin Crasher, you want to have your Deathrattle minions. And unlike Loot Hoarder, this will always draw them.

However, a more specific scenario that a lot of people seem to be missing is tutoring a specific card in your deck. When you play a deck with lots of Deathrattles, this isn’t that much different from a Loot Hoarder. But if you play only a few given Deathrattle minions, then it’s a whole another story. It’s similar to how Sandbinder works in Shudderwock Shaman – the deck wants to draw Grumble, Worldshaker for the combo, and this card helps with that. If you play the deck, it probably saved your neck many times, when Grumble was stuck at the bottom of your library.

It’s not on a level of a tutor card like Town Crier (which is honestly one of the best cards in the game right now, it’s just that Rush decks don’t really work), but it’s still solid. It will most likely see play in a deck like Quest Priest, where it won’t be amazing, but will be solid enough – probably a slightly better version of Loot Hoarder. And might see play in decks that want to tutor a specific Deathrattle card, like, I don’t know, Obsidian Statue or Carnivorous Cube.

P.S. It’s also a Mech, but Priest isn’t among the classes that are supposed to get Mech focus this expansion, so it might not matter.