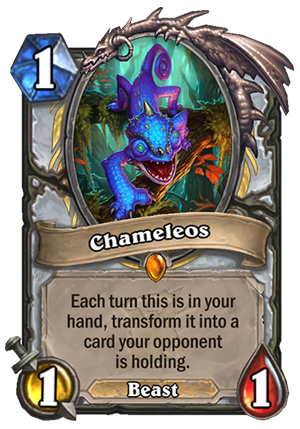 Chameleos is a 1 Mana Cost Legendary Priest Minion Beast card from the The Witchwood set!

Each turn this is in your hand, transform it into a card your opponent is holding.

Probably my favorite card from The Witchwood so far. It’s like a much better version of Shifter Zerus, which was actually a pretty fun card, although not that powerful. But why is it better?

The most important thing is when it comes to this card is gaining information. Every turn you see one random card from your opponent’s hand, meaning that you can gain a lot of intel about them. If it’s the early game, you can learn what deck they play (it might not always be obvious for the first few turns – e.g. whether you play vs Combo Dragon Priest or Control Dragon Priest, those can have exactly the same early game). Later, you can learn about the tech cards they’re holding, about whether or not they drew their combo piece, if they have an AoE clear in their hand etc. Just a basic example – this card turns into a Twisting Nether against Warlock. Simple – now you’re sure that they have one instead of just guessing and you play around it, or try to bait it with refill still in your hand.

However, that alone wouldn’t likely be worth a card slot. Good players already have solid reads on their opponents – depending on how long they’re holding each card, what plays they make, or even what cards they hover over (really!). But what if you could use that card as well? No problem, because you can.

The problem with cards like Zerus I’ve mentioned at the beginning or Molten Blade, or even Shifting Scroll, is that they’re pulling from a certain, fixed pool of cards. In this pool, there are great cards, but there are also bad cards. I’d even say that there are more bad ones than good ones. With Chameleos, you’re pulling cards from your opponent’s deck – and people only put good cards into their decks. Yes, there will be some synergy issues – like Deadly Poison against Rogue might be unplayable, or you won’t really be able to utilize Divine Favor against Paladin, but MOST of the cards will be at least playable, and sometimes even very powerful.

This will be especially powerful in Control matchups, where you will be able to gain a lot of intel about their hand and then play one of their big threats before they do. Copying high value cards is a great way to get ahead in such a matchup. It will be slightly less useful against Aggro, but not useless. Some Aggro deck minions are good – I mean, they’re running Taunts like Righteous Protector, Tar Creeper or Saronite Chain Gang sometimes. Their burn/weapons can also be used against them to control the board. Since you’re more likely to put this card in instead of a big threat, like Ysera (because it will eventually become a big threat in Control matchup anyway), you’d still much rather have this than Ysera in the early/mid game, and that’s what matters against Aggro.

The biggest issue, however, is that it shifts every turn no matter what. You can’t stop it. You can’t plan ahead for it. E.g. if you know that you have a Voidlord in your hand that you stole through other means, it is there and it won’t disappear. Now picking Bloodreaver Gul'dan as your next Discover option from Drakonid Operative might be great, because the Voidlord will get resummoned. If you get Voidlord from Chameleos and you can’t play it immediately, you can’t plan for it. It might be something completely different next turn, and your opponent might already drop that Voidlord. Another negative is this being a 1/1 on the turn you draw it, but that’s not THAT big of a deal.

So while I don’t think this card is AS strong as some people are selling it, it’s my favorite of the set so far. I hope that they come up with more cleverly designed Legendaries like this – with both upsides and downsides, ones that promote thinking and making correct decisions depending on the information you get. I like it!