Week 1 of the Hearthstone Top Decks F2P BTW Challenge is in the books! Here, you see my end of week rank, keep up with my current decklist and get a sense of how I spent my time, gold, and arcane dust for the first week.

I will continue to update my decklist as I gather new cards and record any changes during the challenge. You can see my current build below:

Week 1 consisted of a bit more housekeeping that I had hoped. While tutorials and single player content are great for new players first getting acquainted with Hearthstone, I found them a bit tedious. Personally, I would have liked to have skipped some of the content explanation grind and jumped straight into the content acquisition grind. Once the early stages were behind me, however, I was able to reach the goal I had set for the week faster than anticipated. The speed in which I surpassed Rank 15 is somewhat deceptive, however, as there were certainly a handful of speed-bumps along the way.

As is the case with all new players, I was thrown into the tutorial before getting access to cards of my own. Essentially, the Hearthstone tutorial consists of six boss fights of increasing difficulty in which a game mechanics are slowly released to the player. Each of these matches lasts a couple minutes and are largely scripted battles to ensure the player not only progresses but also learns about foundational components of Hearthstone.

Unfortunately, there is no way for experienced players such as myself to skip over the tutorial, but I’m glad I sat through some of the dialogue (especially the Millhouse Manastorm encounter) to gain a full appreciation for the new player experience. Despite a bit anxious to dive into matches and start accumulating card, I was surprised by how well done it was. It had been years since I completed this portion of the game but, even though I didn’t learn anything new, I felt it covered enough to introduce several critical components of Hearthstone.

After completing the tutorial, I was able to access most of the full game. However, only the Mage class is granted to new players and unlocking remaining heroes requires defeating each hero in Solo Adventures. Once again, I impatiently returned to battling the A.I. so I could complete my first quest, which required me to win 5 Practice games.

Ever the fan of efficiency, I set my sights first on Rexxar and used Hunter to make quick work of the next four heroes. Having just spent an hour or so playing against non-human opponents I deemed unworthy of my time, I declared myself ready for Play Mode (and my next quest, First Blood, undoubtedly agreed).

Early ranks posed a far greater challenge for me than expected. Shortly after taking down the Innkeeper, I approached Ranked Play with the arrogance of Anakin Skywalker facing down opponents who clearly had the high ground.

An easy win in my first game only fed into my overconfidence. Soon after, I faced a Paladin who, after a series efficient minions on curve, threw down a Tirion Fordring on turn eight. Much to my dismay, I was soon staring at the screen below.

This was certainly an embarrassing setback but I’m not too proud to say that I saw the words “You can’t lose stars at this rank.” several times in these early stages of my climb. All of the horror stories from Reddit about the frustrations of low-rank gameplay (most of which I have always been quick to dismiss) were suddenly coming to life.

Soon, after losing to a Priest that dropped an inactive (yes, really) Raza the Chained on turn 5  followed by Shadowreaper Anduin on 8, it became clear that the Basic Cards I had thrown together wasn’t going to get the job done. I returned to battles against the Innkeeper, unlocking the remaining four classes and armed myself with a few new cards from the quest rewards.

With Savannah Highmane‘s in tow, I was able to make my way through a sea of grotesque versions of top tier decks and make it to ranks where I was actually at risk of losing stars.

After my difficulties in the two-star ranks, I realized more cards would be necessary to more efficiently find wins on the Standard Ladder. To bolster my collection, I dove into Arena with the free ticket granted to every new account. To my disappointment, none of the traditionally powerful Arena heroes was an option and I was forced to settle with Gul’dan, who is, at the very least, capable in the format.

Continuing with my streak of unfortunate luck, I was faced with several awkward choices in my draft. Worse yet, still sore from my losses at Rank 25, I was taunted by a set of cards in which Angry Chicken was the best option. The resulting deck was the rather abysmal list below.

Fortunately, I managed to eek out 4 wins with this deck (before a few embarrassing on-stream misplays), which proved to be just enough to snag some decent rewards from the run. 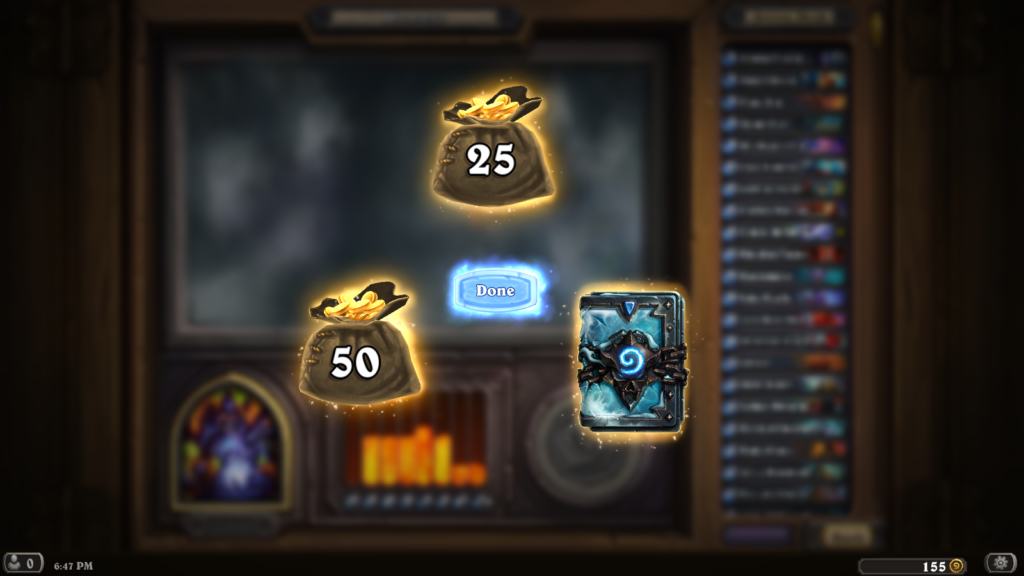 This week’s Tavern Brawl, A Peek to the Past, was perfect for an account with a limited card pool. Essentially, the rules forced my opponents onto an even playing field with my fresh account. As such, it made for a quick and easy Classic Pack with my main deck.

Between Ranked Play grinds, I used the Brawl’s restrictions to my advantage and was able to begin leveling up other classes that were getting trounced in Casual mode by meta decks. My one remaining introductory quest requires me to reach Level 10 with all heroes, which is difficult with how few cards I currently have access to.

After breezing through the Tavern Brawl, I return to the Standard Ladder to continue towards my goal for the week. Despite failing to boast a very impressive win rate, I quickly jumped from Rank 20-15 on the back of a handful of win streaks. The importance of bonus stars cannot be overstated when leveling on decks that are overmatched. Favorable matchups even against much more expensive (and popular) decks provide Hybrid Hunter with the opportunity to sneak a few consecutive wins and jump ranks efficiently.

Due to sub-optimal cards in several slots, wins still did not come easily. Voodoo Doctor and Bloodfen Raptor are not suitable replacements for the powerful Alleycat + Crackling Razormaw openers. Stuck on a seemingly unending win-loss cycle, I broke down and crafted these two cards with some of the rewards for my Arena. The new Beasts had an immediate impact on my results and I was able to reach my goal for Week 1 of Rank 15 within 3 days of the account’s inception.

My win rate in the first week of the challenge was pretty abysmal. While I’d like to place all of the blame on a sub-optimal decklist, my play was not great during the week. Early on, I severely underestimated my low-rank opponents (especially their decks) and my win rate suffered. Much of my success in ranking up this week was thanks to a series of win streaks that carried me to each rank threshold. These streaks were able to compensate for my poor win rate and propel me past my goal for the week.

Going into the challenge, I had a specific strategy I was going to follow for my pack openings (more details later). In short, the plan was to cycle through sets until I opened a Legendary, thus maximizing the Arcane Dust value of my packs. Thanks to the changes to pack openings with the release of Knights of the Frozen Throne, this was guaranteed to happen within the first 10 packs. Additionally, the release of Knights of the Frozen Throne came with the reward of three free packs and my new account was not too late to claim this prize.

Because the deck I’m looking to build doesn’t contain any Legendary cards, I’ve been hoping to open low-quality Legendaries that I can quickly convert to Arcane Dust. Unfortunately, the Legendaries I have opened so far have been mid-tier (at best). At weeks end, I was stuck holding cards that neither good enough to run in any decks nor bad enough to find their way on the Safe to Disenchant list.

If it weren’t for the self-imposed rules of the challenge, I’d have disenchanted each of the Legendaries I opened to complete my deck. For new players, I’d recommend the same. Aggressively disenchanting cards (Legendaries, especially) that don’t see regular play is a great way to craft Commons and Rares that make up the foundation of nearly any deck.

Knights of the Frozen Throne Packs

Whispers of the Old Gods Packs

Early on, Introductory Quests are relatively generous in terms of their rewards. However, with so few of these quests available, that well is quick to dry up. To make matters worse, new players are forced to finish off several 40 gold quests before the more lucrative assignments become available. Unaware of this myself, I was constantly rerolling early quests assuming it was merely a bad string of luck. Eventually, research uncovered a threshold of these low-reward quests that must be reached before others are unlocked. The result is a seemingly reasonable amount of resources early on followed by a period of drought.

My excitement over starting the F2P BTW Challenge is apparent in the amount of time spent playing Hearthstone this week. While I still truly enjoy the game and play quite a bit as it is, starting fresh brought back some of the excitement from my introduction to the game.

However, I could feel some negative effects of my longer than usual gaming sessions during the week. The combination of fewer breaks, published goals, and a sub-optimal deck made me tilt quicker than normal and misplay often.

Reaching Rank 10 in the upcoming week will give me plenty of time to make my to Rank 5 by the end of the season. Given that I’m already closing in on this milestone, it shouldn’t be terribly difficult to accomplish. However, pacing myself a little better (in terms of time played) in upcoming weeks may be beneficial.

Along with reaching Rank 10, I’d like to complete the Knights of the Frozen Throne Solo Adventures with my limited card pool. While I’m not certain that the cost to reward ratio is worth the time for the sake of the challenge, completing this single-player content does provide additional, highly-valuable packs.