Our Wild Giants Warlock deck list guide will go through the ins-and-outs of this deck! This guide will teach you how to mulligan, pilot, and substitute cards for this archetype!

Giants Warlock is a control/combo deck that revolves around the interaction between Naga Sea Witch and the mana-cost reducing Giant cards like Molten Giant and Mountain Giant. In a patch shortly after the Knights of the Frozen Throne expansion was introduced Blizzard silently changed the order in which Naga Sea Witch and the various Giant cards reduce their cost, allowing players to cast several Giants for no mana as long as Naga Sea Witch is on the board. This is an entirely neutral combo, and while Warlock along with Druid were initially strong candidates due to their draw and anti-aggro tools, they eventually fell out of popularity in favor of Hunter’s consistency in finding the combo by turn 5. After the Kobolds and Catacombs expansion was introduced, Cube-lock variants were dominating the ladder, and a couple weeks in players discovered that including the Giants package all but assured victory in the mirror match. As time went on lists have phased out the Cube-centric combo pieces, landing on a more Giants focused list.

Ideally this deck wants to play Naga Sea Witch on turn 5 into a board of Giants that can deal lethal damage on the following turn (4 Giants if your opponent is at full life). Thanks to Life Tap this is fairly reliable against the slower decks that allow you to hero power for the first few turns, but can be difficult against more aggressive decks. 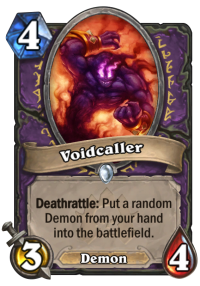 The idea here is to survive while taking as little damage as possible. Voidcaller into Sacrificial Pact into Voidlord is a soft win condition against these decks. Your opponent loses a lot of steam removing Voidlord if they don’t have a Spellbreaker in hand. In these matchups this deck does suffer from not including Dark Pact, which means you have to be much more careful with your life total. This deck runs some of the best board clearing tools available to any class, so protecting your health is very doable. As the game goes on if you can keep your opponent relatively in check you will find opportunities to play a Giant here or there. With a Giant on board your goal is to clear the board while leaving the Giant alive so it can hit face. After a few rounds of that, or if you can safely play a Naga combo, you’ve won the game.

One of the nice things about the aggro matchup is you can more easily stick a Naga Sea Witch. If you find a turn where you can clear the board and then play Naga, even if you don’t summon any Giants you can easily summon Voidlords or Bloodreaver Gul'dan before they could normally be played on the next turn. 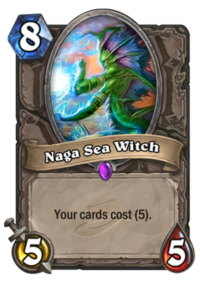 Hard mulligan for Naga Sea Witch, and if you have one keep every Giant you can. If you can make a big Naga play on turn 5 then your opponent’s answers are pretty much limited to The Coin/Lightbomb and Frost Nova/Doomsayer. Malygos Druid used to lose to this deck almost automatically, so they started adding in Poison Seeds to give themselves a fighting chance. This is a soft counter to your Naga combo, when this happens just keep pressuring face. If they can’t follow it up immediately with Spreading Plague then you can get a lot of damage in with those 2/2 minions.

If you wiff the combo on turn 5 then the next safest time to go in with your Giants is turn 10. On turn 10 you can play Loatheb along with your combo to protect your Giants from almost any removal card that could have cleared them. If by some miracle they manage to save themselves anyway, then you still have Bloodreaver Gul'dan to fall back on. In between turns 5 and 10 playing one Giant at a time is often better than flooding the board against decks likely to have a full clear. Malygos Druid’s best single target removal (bar Naturalize, which usually isn’t included) is also their only full clear: Poison Seeds. So, if you summon Giants one at a time eventually your opponent is going to be forced to waste their Poison Seeds, after which you are free to go in with your Naga. Against Big Priest this plan is less effective. Big Priest runs Shadow Word: Death to supplement Lightbomb and Shadow Visions to generate additional copies of them, so you pretty much have to wait until turn 10 against them if you don’t have combo on turn 5.

In the mirror match, ideally you’re going second so you can use The Coin to summon a Naga board before your opponent. If you don’t have Naga, or went first, it’s important to play a Giant on turn 4. If you do this, then when your opponent sets up their Naga, you can hit them in the face and play Shadowflame to clear their board, keeping you in the game. In Warlock matchups it’s also important to remember that Sacrificial Pact can target opposing Demons, so save it for them if you can. Voidcaller turn 4 also combos into Sacrificial Pact/Mal'Ganis/Shadowflame on turn 5 to clear an opposing Naga board.

This deck needs to do two things: survive and play Naga Sea Witch into a bunch of Giants. This list contains the best cards to accomplish this, and creates a strong backup plan with Mal’Ganis and Gul’dan. Just about any change to the deck makes it less consistent, but there are some options. You could run a Carnivorous Cube package by cutting archetype specific techs like Shadowflame and Mortal Coil. This would add some burst and value potential to the deck, but both Cube and Giant combos are probably better without the other.

The mandatory cards in the deck are Naga Sea Witch, all 8 Giants, and I would argue Defile. Apart from that, this deck has a lot of room for budget replacements while remaining playable. Here are some options if you’re short on dust:

You could consider N'Zoth, The Corruptor, but this deck runs a bare-bones late-game plan only for just in case, you really want to win on turn 5. Do not substitute another Giant for Arcane Giant or Frost Giant, they can’t be played on turn 5 with a bunch of other Giants and thus are not candidates for your turn 5 win plan.