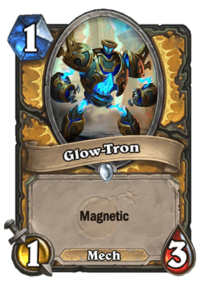 Paladin is one of the three classes, which got the most Mech support in Boomsday Project. While Warrior was focused on the Control side, and Hunter got more aggressive cards, Paladin got placed somewhere in between – the new cards mostly support a Midrange style of decks, and that’s exactly what we went for here.

The deck is mostly built around the new Legendary spell Paladin got, but it can as well win without it by simply putting pressure. At the same time, I feel like it’s a deck that might get heavily countered by the Silence meta – if everyone would run Silence, then each one of your win conditions would suffer.

Midrange style of Paladin was pretty uncommon for a long while, until Even Paladin has brought it back. But Even Paladin was a sort of a special case – it was carried by the fact that it could fill the curve with 1 mana Hero Powers, something a regular Paladin deck can’t. Mana curve was always important for Midrange Paladin, and most of the builds from this archetype in the past won the games thanks to dropping a solid threat on every single turn. Will this build be able to keep up in the upcoming meta? It’s hard to say right now, but I feel like it’s pretty promising! 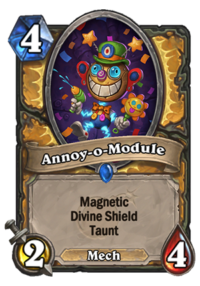 First, let’s focus on the Mech package. Starting with a 1-drop Glow-Tron, I think that it’s one of the best Mech cards printed in this expansion. A 1 mana 1/3 proved to be holding quite well against a variety of meta decks, but this one comes with a significant upside. A 1/3 minion on Turn 1 is good, but if you were to drop it in the late game, it would usually be irrelevant. So instead, you might use it as a buff. Doing that has two advantages – you can use the extra stats immediately (and +3 health in particular can let you trade into something while saving your minion), and you don’t dilute your Kangor’s pool of Mechs to revive. On the contrary, you make it stronger by applying a Magnetic buff! Then, we have Upgradeable Framebot on T2 and Nightmare Amalgam on T3. They’re just solid, vanilla-stated Mechs that are good bodies to stack Magnetic onto. Next, we have our Magnetic package – Annoy-o-Module, Wargear and Zilliax. They’re your mid game buffs, that will let you get ahead in terms of tempo. The main advantage of using them as Magnetic is the fact that their stats get “charge”, meaning that you can attack with them immediately. However, if you have no Mechs to stack them into, dropping them on the board won’t be the worst thing ever – but they’re below average as minions, so keep that in mind and try to use them as Magnetic as often as you can. 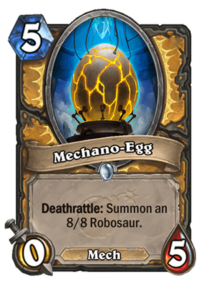 And last, but not least – Mechano-Egg. The main problem here is that it’s very vulnerable to Silence – more than most of the other minions in the game. If it gets Silenced, you ended up spending 5 mana to play a 0/5 minion, which is absolutely terrible. That’s why how common Silence will be in the upcoming meta will make or break the deck. Despite my initial predictions, I think that Silence won’t be AS common as you might suspect – the quality of Magnetic Mechs didn’t change much from the initial reveals, we didn’t get lots of new, high power Magnetic cards so good that they will be all over the ladder, which would warrant Silence in every deck. Of course, Mechs are not the only cards you might want to Silence, so it’s still hard to say how the meta will look like. For now, let’s assume that people will run Silence cards (like they do in every meta), but not crazy amounts of them. Mechano-Egg is really good for three reasons. First – you can be pretty much sure that it sticks to the board, letting you put Magnetic minions onto it. Second – when it pops, an 8/8 comes out – that’s huge and it will require an immediate answer. And third – either the Egg itself or the 8/8 minion are great to revive with Kangor’s, even without any extra buffs. If it won’t be Silenced, adding a Taunt through Annoy-o-Module or Zilliax can be an amazing play. Your opponent won’t be able to ignore it, he will have to clear it (and it won’t be that easy), and a huge minion will pop out after he does. You can also pop it immediately yourself with Void Ripper – that’s also kind of an anti-Silence insurance, even if you suspect that your opponent is holding Silence, you can wait until Turn 8 to play those two together. 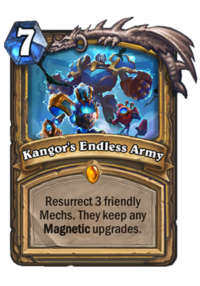 And of course, the biggest tempo card in this deck – Kangor's Endless Army. Reviving 3 random Mechs is already strong, but would require building a deck around it. You most likely wouldn’t want to play smaller stuff, such as Glow-Tron or Upgradeable Framebot. But in case of this card, it’s not a big deal, since revived minions come with their Magnetize buffs. Which means that if you played Module on Framebot, you will end up reviving a 3/9 minion with Taunt and Divine Shield and NOT a vanilla 1/5. The card works especially well with Zilliax – no matter what you stack him onto, you end up with a solid body with Rush, Lifesteal, Divine Shield and Taunt. This card is so good that just high-rolling a single minion and then reviving two more vanilla Mechs will be good enough – while low-rolling on all 3 might happen, it will be very rare (sometimes even impossible, if you manage your Magnetize buffs correctly). Against Aggro decks, this should be big enough swing to win the game most of the time. Against Control decks, it will require a big AoE clear – that said, if Egg will be one of the cards you revived, you might still end up with an 8/8 on the board. 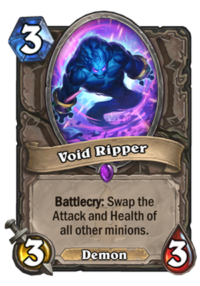 Another interesting card I want to talk about is Void Ripper. We already see it being played quite commonly, in different deck lists. One of its main roles is countering cards such as Doomsayer, Spreading Plague or Shaman’s Totems. And it will do just that in this deck too. But on top of that, you have lots of minions that could the a massive advantage of Void Ripper’s effect – low attack, high health minions. Glow-Tron, Upgradeable Framebot, Stonehill Defender, Annoy-o-Module, Mechano-Egg, Sunkeeper Tarim – all of those cards can often benefit from flipping their attack and health around. You will usually use it to trade up – for example, if your opponent drops a 3/3 minion and you have Glow-Tron on the board, you can flip its stats around and trade immediately. In case of Mechano-Egg, you can immediately pop it, or combo it with a cheap Magnetic and THEN flip it. For example, if you stick Egg to the board, next turn you can drop Glow-Tron to make it 1/8, flip it and either deal 8 damage or trade into some big minion. Imagine killing The Lich King that way – that would be hell of a tempo swing! Besides trading up, you can also use it for burst damage. Paladin isn’t usually suspected of having lots of damage from the hand (rightfully so), which means that a Void Ripper can really catch your opponent off-guard. If he sees that you only have 3 damage on the board (2x Framebot and Glow-Tron), he might not worry about his life total at all. But then, if you flip it, you suddenly have 13 damage, which might be enough to kill an unsuspecting opponent. That’s why I like two Void Rippers in that deck, they simply have so many cool uses. 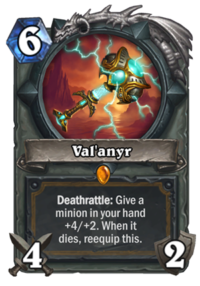 Yet another card that I feel like it belong to this deck is Val'anyr. It’s a solid Midrange Paladin card in general, but it fits this deck in particular because of the Magnetic mechanic. After you use it initially, if the Val’anyr buff lands on one of the Magnetic minions, you will be able to Magnetize the extra Val’anyr stats (and effect) onto something already on the board. That can not only lead to massive burst turns, but it will make your Kangor’s Endless Army even better. Imagine reviving two huge minions with Val’anyr buffs – even if that board gets cleared, you start buffing lots of stuff in your hand and getting new weapons all the time. Another reason is that the deck runs lot sof good Val’anyr targets in general – minions with Divine Shield and low attack / high health minions make for some of the best buff receivers. For example, you turn your Framebot into a 5/7 with the Val’anyr’s buff, which is much better than most of the other 2-drops (e.g. if it was a 3/2, it would become a 7/4, which is a significantly worse stat-line). However, that’s another part of the deck, which is vulnerable to Silence. Since we’re heavily relying on the opponent not having it, we can as well go all-in. Not to mention that the more Silence targets you run, the less likely is that one Silence will be enough to disrupt your game plan, so that’s always a small win. 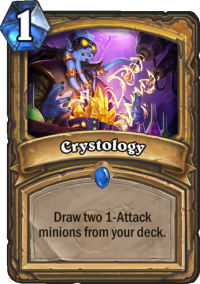 And finally I want to talk about some general cards. Crystology is one of the card I think lots of folks are underestimating – in the right deck, it draws 2 cards for 2 mana. Early in the game you can use it to fill your curve (since in this case the cards you draw cost 1-3 mana), and later in the game you can increase the quality of your future draws heavily by pulling those cards out of your deck. The deck runs eight 1 Attack cards in total, which should be enough for the second Crystology to not fail most of the time. Then, I’ve decided to put the Equality + Consecration combo, which is a very powerful board clear, even in Midrange decks. Both cards are also useful individually – Equality can be great if you have any small minions vs big minion situation, and Consecration is just a generic AoE card useful in most of the metas. While Sunkeeper Tarim doesn’t have a great synergy with this deck, I feel like it’s still worth a slot. You simply won’t use him when you have big Mechs on the board – but you don’t really mind turning 1/4’s or even 1/5’s into 3/3’s, and you can also buff Righteous Protector, as well as 1/1’s from your Hero Power. And his effect is simply really powerful – it lets you swing the board in your favor even against the biggest minions. Spellbreaker is a tech card, because I suspect that one Silence should be useful. But if it turns out that it’s not necessary, I’d probably sub it with as second Truesilver Champion – a well-rounded weapon. 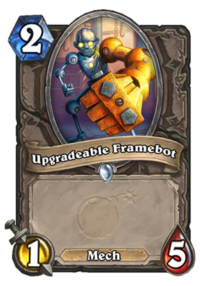