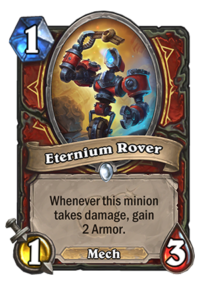 Warrior is one of the three classes, which got the most Mech support in Boomsday Project. Warrior in particular got cards that promote a more reactive gameplay – slow Midrange or Control decks. So I’ve decided to stick with that plan and play a Control-ish version of Mech Warrior.

The main advantage of this approach is how well will it handle aggressive decks. With multiple ways to gain Armor, remove threats and create big Taunts, Mech Warrior has a lot of ways to counter Aggro builds. Despite that, it also needs a way to win against slower builds. Here, Dr. Boom, Mad Genius plays the most important role – despite his Hero Power randomly changing every turn, most of the options are good. Giving your Mechs rush can also let you out-tempo opponents, stick some minions and crush them with a big board.

Given that Blizzard has decided to print way more Mechs than I’ve anticipated, it’s hard to say which ones will ultimately make a cut. Some of them might seem strong on paper and weak in the game, and vice versa – those which seem strong might turn out to be underwhelming.

Let’s start with stating the obvious – Control Warrior was in a pretty poor state for the last few expansion. Despite getting more and more tools, it just fell flat each time people have tried it, never getting to the mainstream meta. Will Mechs change that? It’s impossible to say at this point, as it will completely depend on how the entire meta will look like. However, some of the Mech cards Warrior has got this time around look pretty powerful, so everything’s possible. 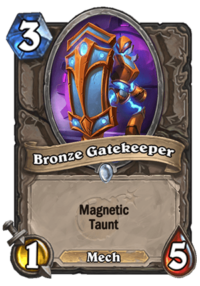 I’ve decided to focus on the anti-Aggro part, which might be a mistake, but again – it all depends on how the meta shapes. First of all – Eternium Rover. Despite looking pretty harmless, this card is the Aggro killer. If you drop it on Turn 1, against their 1-drops, you will get 4 extra armor most of the time, on top of the 1/3 body. But that’s not the best part – combining it with Bronze Gatekeeper turns it into an Aggro nightmare. A 2/8 Taunt that gives you 2 Armor each time you take damage, and if you stick Rover on Turn 1, you can have it up as soon as Turn 3. Remember how strong Alley Armorsmith was in some Aggro matchups? Imagine getting it up two turns earlier, when 2 damage is often enough to trade into minions instead of just damaging them. Alternatively, even if not Rove, sticking Gatekeeper into an Upgradeable Framebot can create a massive 2/10 Taunt, which will be really hard for an Aggro deck to get through. And of course, later down the road, there’s also Zilliax, providing another Taunt on top of Divine Shield and Lifesteal. Talking about anti-Aggro Mechs, Dyn-o-matic is another one that should work really well in lots of situations. It’s like a mini-Volcano, in a way that it can clear one midrange minion (like a 5/5) or a few small tokens, which should make it useful in different Aggro matchups. Let’s say that you play against Odd Rogue with a 4/4 Hench-Clan Thug and a 2/1 Southsea Deckhand on the board. Just drop this, clear everything AND get a 3/4 body on top of that. While it won’t be perfect in every scenario, you should find plenty of good uses for it. 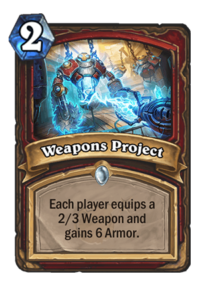 When it comes to anti-Aggro tools, it’s worth mentioning Weapons Project. While giving an Aggro deck a 2/3 weapon might not seem very anti-Aggro, trust me that it should work really well. Your weapon will get more value than theirs, since they will be the ones putting more minions that are going to be in range of it. On top of that, the Armor you gave them is pretty much useless for them. But, Weapons Project has more uses than just early game removal against Aggro. Since it gives you 6 Armor immediately, but it takes them 3 turns to do it, it’s also a short-term life gain if you desperately need it. Then, you can destroy your opponent’s weapons by replacing them with a 2/3. Even getting rid of that Candleshot or Unidentified Maul is better than nothing, but later in the game you will be able to destroy bigger weapons, such as Vinecleaver. It will also be a great counter to Legendary weapons – Twig of the World Tree, Skull of the Man'ari or Aluneth. On Turn 7, you will also be able to combo it with Harrison Jones. You will end up putting a 5/4 minion on the board, gaining 6 Armor, a 2/3 weapon and +1 card advantage (while cycling 3 in total), which should be a great swing in your favor.

If you’re looking for more value, Omega Assembly should come handy. At the base level, it’s not adding much value to your hand, that’s why you shouldn’t use it that way against Control decks, unless you absolutely have nothing to do. However, it’s fine to use the basic version of the card against Aggro – to find some mid game play, or another Taunt, or a Magnetic minion to buff your Rover, or basically whatever you need. However, the card really starts to shine when you hit 10 mana. It’s a high tempo value generator – normally it would take a few more mana to get 3 random Mechs (a card like that would probably be priced at 4-5 mana). While the quality of random Mechs isn’t amazing, think about it that way – you’re always getting your best Discover choice anyway, and the other 2 are bonus. Even if they aren’t great, you still get more bodies to drop on the board, which will be especially useful with your Hero Card. 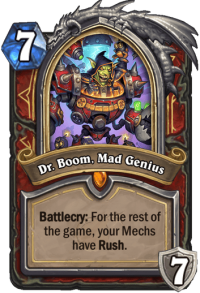 Talking about the Hero card, the bread and butter of Mech Warrior is obviously Dr. Boom, Mad Genius. While initially it’s most likely the slowest Hero card, since it doesn’t have any instant effect besides +7 Armor gain, you can start building back the tempo from next turn. This deck does not have a lot of Mechs to Rush in the deck itself, but keep in mind that you can get up to 6 extra from Omega Assemblies, and every few turns you will be Discovering another Mech with Dr. Boom’s Hero Power. Which ultimately will make the effect worth it. However, the effect isn’t everything – the Hero Power I’ve mentioned is also really powerful. While it’s random (which is a significant downside), basically every option is much, MUCH better than your Basic Hero Power. In slower matchups, dealing 3 damage, summoning 3x 1/1 (which will have Rush, of course) or Discovering a Mech are the best options. Mechanical Whelp is a card I particularly like after playing Dr. Boom – while normally it’s very slow, if you can rush the 2/2 body and kill it immediately, you then end up with an 7/7 minion with Rush. Paying 6 mana for a 2/2 + 7/7, both with Rush, is pretty crazy. So far I’ve decided to put one copy in, but we’ll see, if it turns out to be good, a second copy might also be played.

Other than Dr. Boom, the deck packs some more big threats, although not as many. If the meta will turn out to be slower, it will of course be possible to cut some of the early cards and add more big threats. But keep in mind that there will be a high chance to discover some big stuff from Omega Assembly, as well as the Dr. Boom’s Hero Power. But, as for those threats, they are really standard. The Lich King is about the best late game value card, providing a big body with Taunt (which makes it pretty useful even in faster matchup), as well as very strong cards from his effect. The second late game threat is Grommash Hellscream – another card that is good against both types of decks. It’s solid vs Aggro, since you can trade into something immediately, but it’s also a good finisher vs slow decks – combine it with either Blood Razor or Warpath and deal 10 damage to finish the game. Of course, depending on what decks will dominate the meta, the deck’s win conditions will be adjusted. If Aggro will be a thing, you can go for even more early game, and if Control decks will dominate, you can slow down.