Our Midrange Hunter deck list guide for the Rise of Shadows expansion features one of the top lists for this archetype. This Hunter guide includes Mulligan Strategy, Gameplay Tips, Card Substitutions, and Combos/Synergies!

One of the most durable archetypes of Hearthstone history – dating back to early 2014 with Lifecoach’s “Sunshine Hunter” build, Midrange Hunter is seeing a relatively expected renaissance in the Rise of Shadows meta. Its general strategy always remained the same: utilize Hunter’s Beast synergies and play a tempo game, eventually using your hero power and Kill Command to close out the matches. While it was mostly overlooked in the early days of the expansion, it’s featured in the lineups of many HCT players, which prompted another reexamination of its current strength by the community. The deck, as its name might suggest, tries to find a narrow path in the metagame by playing control against all-out aggro archetypes while taking on the beatdown role against the slower opponents. While it lacks most of the flavor of the class’ powerful decks from the Year of the Raven, its Beast-related synergies are strong enough to make it a real contender if you can pilot it right. Master's Call (especially when combined with Dire Frenzy) is powerful enough to carry the deck into a new Standard Year. 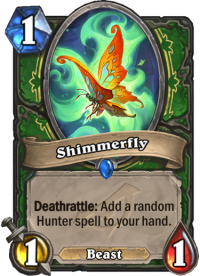 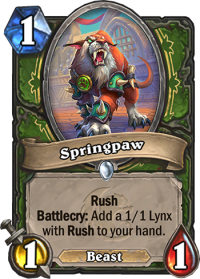 As we’ve established above, Midrange Hunter decks need to play a control strategy against most pure aggro decks, with the added caveat that the lack of heals and taunts will eventually require you to turn on the heat. This means you shouldn’t be too greedy with your removal options. Your early-game strategy almost entirely revolves around fighting for board control with initiative tools like Hench-Clan Hogsteed and Headhunter's Hatchet, eventually curving into Unleash the Beast, with a special mention to your big combo of Unleash the Hounds and Scavenging Hyena. Keep in mind your minion options in the first two turns are much weaker than they used to be in the Year of the Raven, which means you should always actively consider tossing out a 2/2 (either Hyena or Dire Wolf Alpha) on the second turn.

Since most faster decks also live and die based on their board presence, these cards will give you a leg up in many games – the big exception being Rogue, a class which is capable of dealing a lot of damage from hand, making it a fairly tough matchup. Since they have inevitability over you, your best bet is to prioritize face damage and try to finish off the game before they do. Your lack of weapon removals (due to Master’s Call) will also force you to push face, since they are guaranteed to get the whole value and damage output from Waggle Pick. 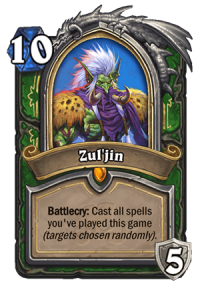 Historically, the anti-control beatdown role was always the easier one for Midrange Hunter, but it’s perhaps a bit easier to go astray. Tempting as it may seem to take a Warrior to the late-game with potentially four copies of Dire Frenzy, it simply isn’t feasible. Your job is to exert maximum pressure at all points, consistently asking whether your opponents have the requisite removal and cash in on the face damage when they don’t. The notable exception to this is the Conjurer Mage matchup where you simply can’t afford to leave up high-mana targets in the early turns, but that basically still only applies to Mountain Giants. Big Conjurer's Calling-related shenanigans past turn eight with Power of Creation and other tools can only really be answered by dealing lethal damage, which means you need to maximize your output earlier on.

As a corollary, you also can’t often afford to go greedy with Zul'jin: even one Unleash the Beast gets you great board presence and a strong spell in hand, and just one or two extra spells will establish a credible threat as long as you’ve pushed in enough damage by that point.

There’s been a lot of discussion about the correct build of Midrange Hunter – we’ve featured the one included in our pre-release theorycraft by Old Guardian which was subsequently popularized by TJ and others – because there are so many minor adjustments you can make depending on whether you’d prefer to increase your winrate against faster or slower opponents. Savannah Highmane can be dropped for a Wing Blast and certain builds also cut the Tracking of the second copy of Dire Frenzy – while it’s tough to salvage the Rogue matchup, Rat Trap is an interesting option that can be worth considering. Zul'jin’s refill ability makes it a core card for longer games, but if you don’t own this particular Legendary, there’s always a second Highmane or Tundra Rhino to consider. Master's Call can’t be replaced in this particular build – you restrict yourself to Beasts only just because you play this card. If you remove it, the deck’s power level will go down, but you will be able to play other cards (such as Houndmaster or Houndmaster Shaw) instead.