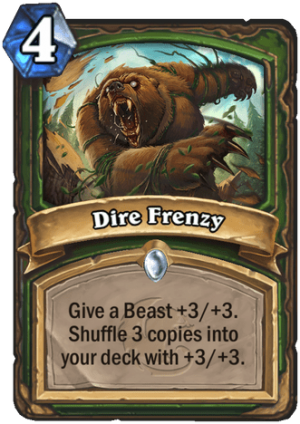 I didn’t expect a card like this in Hunter, to be completely honest. And that’s why it’s super hard to rate. It looks powerful, but at the same time, it might not be something Hunter actually needs.

First of all, this card is pretty slow. +3/+3 for 4 that can only target Beasts is like a much weaker Blessing of Kings in a class with no Divine Shield 1-drops to get extra value from it. By itself it’s not good – it’s slow and clunky. However, shuffling three copies of the card with +3/+3 buff is a quite powerful effect. You can look at it in two ways. You can buff a small minion, like a 1-drop, and then shuffle high tempo 1-drops. This is great if you can constantly cycle through your deck, but if you end up in top deck mode, drawing a 4/4 with Charge is okay-ish, but not spectacular. Otherwise you can buff a bigger minion, like let’s say Savannah Highmane, and get 3 more copies of 9/8 Highmanes in your deck. Really good, but even slower. Better in top-deck mode, but worse if you’re drawing lots of cards and prefer tempo.

The card is bad against Aggro, unless you buff & shuffle a Taunt and then draw it, but there aren’t many Beasts with Taunt Hunter wants to run (you could theoretically use the new Witchwood Grizzly, but it’s a 9 mana combo if you want to play both cards immediately).

On the other hand, the card is quite good against Control decks. They might already have a hard time dealing with your board, and when you start drawing the buffed minions, well, that’s great.

The combo I’ve read about, which is actually interesting, is using this on Stonetusk Boar and then drawing the buffed copies with Tol'vir Warden. 5 mana 3/5 with “draw two 1 mana 4/4’s with Charge” is absolutely insane, but this might be pretty hard to set up.

All in all, the card is very interesting, but I fail to see what deck would really want to play it. Aggro or Spell Hunter are obviously out of the question. Midrange? Maybe, but I still doubt it. Midrange is rarely about the longer game, it’s about the tempo. This card is pretty weak tempo, and since you usually want to close out the game before the late game, you don’t have a very high chance to draw your buffed Beasts. Houndmaster is much better 99% of the time – +2/+2 buff and a 4/3 body is much better than +3/+3 buff and shuffling the buffed cards into your deck, as the initial pay-off is much higher.

It would be best in a slower deck with lots of cycling, one that could afford to not play for the tempo all the time and have enough card draw to get those buffed copies. But the thing is, I don’t think that such a deck really exists. Unless Control Hunter somehow suddenly starts to work. Possibly in Kathrena Winterwisp deck – you could shuffle more big Beasts into your deck. But then again, the big Beasts usually die the turn they show up on the board, so it might be hard to combo it with one before the very late game (+ the deck is losing some stuff).

That’s why I’m going to go against the popular opinion. Even though I like this card, I don’t think it is going to see lots of play.