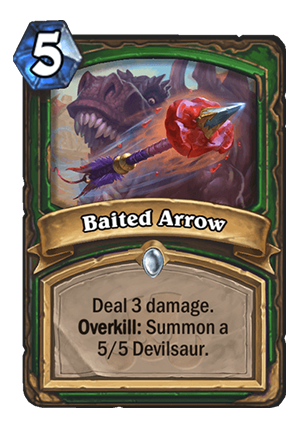 The card is common, but the steak is rare.
Tweet

In the best case scenario, Baited Arrow is a 5 mana 5/5 that deals 2 damage to a minion. Which would actually be quite good – probably would see some play. But the problem is that it’s only the best case scenario. You NEED to hit a 0-2 health minion for the Overkill effect to trigger, meaning that if you use it on anything with 3 or more health, you just get 3 damage for 5 mana – absolutely terrible.

This card will sit dead in your hand every often, since you will wait for the moment when opponent plays the minion you can summon 5/5 from, or at least for some other spell you can synergize with. And there is actually one solid synergy – Hunter's Mark. Hunter’s Mark + this will be a guaranteed kill on any minion + a 5/5 for 6 mana and 2 cards. Not absolutely crushing, but pretty good.

However, for the most part, Flanking Strike is just better. It deals 1 more damage (if you want to summon a minion, that is), and costs 1 mana less, but the biggest deal is that you CAN use it on a higher health minion. Your opponent played a 5/5? You can Flanking Strike it and hope that the 3/3 trades into a 5/2 next turn. Or you can use it to trigger your Devilsaur Egg. Plays like that happen, and you wouldn’t be able to do it with Baited Arrow.

It might see some play in Spell Hunter, because the deck loves spells that summon minions. However, the deck is already pretty packed, so it might be hard to fit it in.

Overall, I’m not too impressed with this card, but it doesn’t look terrible.