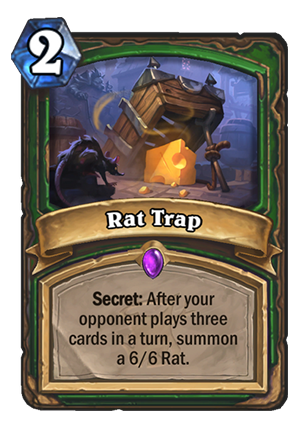 Rat Trap is a 2 Mana Cost Epic Hunter Spell card from the The Witchwood set!

Secret: When your opponent plays three cards in one turn, summon a 6/6 rat.

I’m not a big fan of this card. First things first, it’s very meta-dependent. Playing 3 cards in a single turn is actually not that common. Some decks do it all the time – especially combo decks – but others really don’t. Even Aggro decks rarely play more than 2 per turn – early in the game they usually play a minion or two on the curve, and later in the game they just don’t have enough resources to do it. Divine Favor or some early game shenigans with Coin are the counter-points, but I don’t think it’s enough. Against Aggro, you’d much rather have either Explosive Trap or Wandering Monster.

Against Control? Very unlikely. Control decks rarely play more than one card per turn, 3 is rather uncommon. When you’re at the point when they can play 3 cards per turn, they will usually either identify what Secret it is and try to play around it, or have an answer for your 6/6.

This card works best against combo decks. For example, it’s a good way to counter some Miracle Rogue turns, especially Gadgetzan Auctioneer or Edwin VanCleef turns, but even “regular” Preparation turns. Combo Priest also tends to play multiple cards per turn, especially with Radiant Elemental on the board. And so on and so on.

So whether you put this card into your deck or not will heavily be a meta call. The thing is, you really don’t want to spend 2 mana and a card and have to wait 4 or 5 turns for the pay-off. It would be much better if Hunter had a card like Mage’s Medivh's Valet – a card that benefits from having a Secret that is not triggered right away. Maybe something like that will get released?

One thing that is great is if this Secret sees ANY play, people will often think twice before playing their third card if they haven’t triggered your Secret yet. It will make other Hunter versions running Secrets better, as players might have it in the back of their minds. But in reality, I think it will turn into something like Sacred Trial – a Secret that you could play around quite easily.

Realistically, there are matchups in which this card is never going to proc and matchups in which you’ll have to wait at least a few turns. It’s also an RNG card, believe me or not. It’s so much better when going first, because now your opponent has a significantly higher chance to play more than 2 cards, thanks to the Coin. A simple 2-drop + Coin + 1-drop from Aggro will proc it, which wouldn’t happen if they were going first.

That said, the 6/6 you get from it is a pretty big deal. Having a 6/6 for just 2 mana is huge tempo gain if they proc it quite quickly. Depends on the situation, it’s either a great trading machine (you will usually get 2 or 3 for 1 with it in the early/mid game) or a way to push lots of damage.

It seems more like a tech card you can put into your deck when either the meta is right or people forgot about it already, don’t play around it and you might be able to punish them for that.

P.S. King Mukla synergy – give them two bananas they can’t use alongside another card or this will proc! That’s actually pretty funny, but they will know that they have to play around it then. 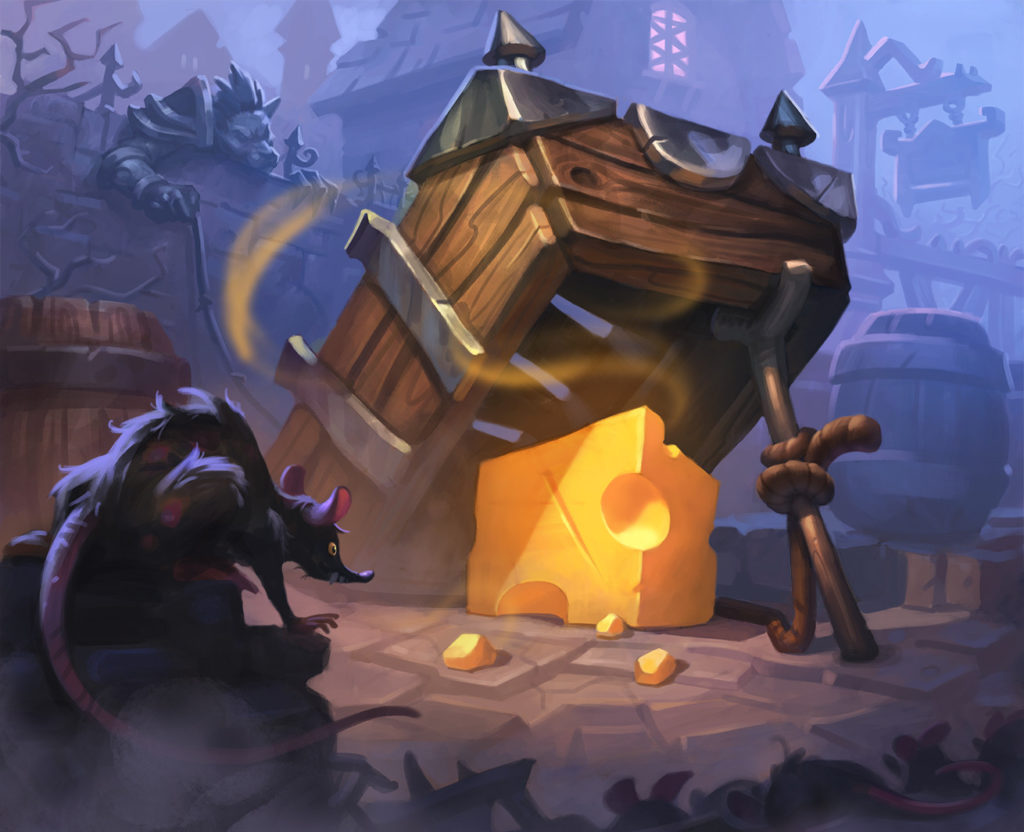