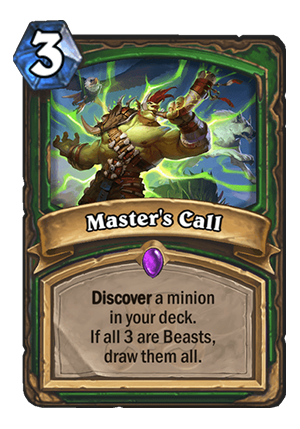 Discover a minion from your deck. If all 3 are Beasts, draw them all.

This is another “deck building” card like Reno Jackson, Baku the Mooneater or the Hunter’s own Rhok'delar. You see, discovering a single minion from your deck for 3 mana is absolutely terrible. You can already do that with a 2/2 body stapled into it and it doesn’t even see much play (Stitched Tracker). You basically NEED to get 3 Beasts for it to be worth, because drawing 3 for 3 is great.

Since it’s a Discover effect, running even a single non-Beast card could mess with it A LOT. If you run 10 different minions, 1 of which is not a Beast, you already have 30% chance to see it in Discover, ruining the “draw 3” effect (and Hunter decks are generally pretty spell-heavy, so they would realistically run even less minions). Running 2-3 non-Beasts would make it unplayable. So you need a dedicated Beast deck, but does such a thing even exist? Right now, no, it does not. But even if it did, you’d still want to run something like Houndmaster – it’s one of the main reasons to run a Beast deck in the first place. Cutting Houndmaster Shaw is also a difficult decision. Could you risk running it and making this card fail quite often? Hard to say, I would guess not.

Card rating; 10/10 in a full Beast deck… but I’d say that 3/10 in general, because you don’t really want to limit your minions only to Beasts