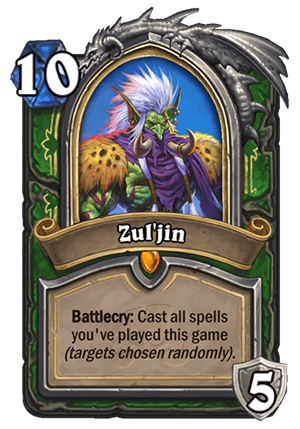 Battlecry: Cast all of the spells you've played this game (targets chosen randomly). 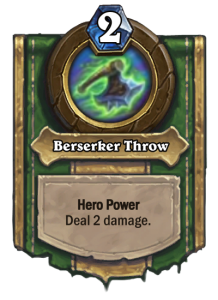 It looks like a lot of players are underwhelmed with this card, but I honestly think that’s how Hero cards should look in the future. Well, maybe not EXACTLY like that, but I won’t cry when the days of infinite or insane late game value cards like Deathstalker Rexxar, Frost Lich Jaina or Bloodreaver Gul'dan are gone. I had my fun with those cards, but in general, they aren’t healthy for the meta, as they basically force everyone to have an infinite win condition OR a combo win condition to win the game. You can no longer play Hearthstone with a classic Control deck, like the oldschool Control Warrior, Control Priest or Control Paladin, simply because even if you pack a lot of value into your deck, a Midrange Hunter with Rexxar can still win the fatigue game against you.

Zul’jin is a different kind of Hero card. In this case, most of its power resides in the Battlecry, while upgraded Hero Power is just an icing on the cake. The effect to repeat all of the spells is very powerful. Yes, it’s kind of similar to what Yogg-Saron, Hope's End was, but his effect is much more predictable. Which usually means lower potential for a high roll, but also a lower potential for a low roll, if you know what I mean. Basically, the effect is more consistent. The effect would fit best into a Spell Hunter deck, which runs cards like Animal Companion, To My Side!, Lesser Emerald Spellstone, a bunch of Secrets etc. The deck also plays removal, such as Deadly Shot and (less commonly) Crushing Walls. Those would all be predictable, positive effects – you would end up with some nice board presence, a few Secrets in play and maybe even some minions removed. This is absolutely powerful, and a great swing that might let you win the game. Of course, some of the effects are less predictable, but they honestly should not impact the overall swing of the card. For example, Kill Command or Flanking Strike would pick a random target – so it might hit an enemy, but might also hit you or your minions. In the grand scheme of things, you will still summon much more than you would remove, but it’s something to keep in mind.

As for the Hero Power – dealing 2 damage to anything vs only to your opponent’s face might not seem like a big difference, but it’s quite good. You can still use it in the same way you would, but now you can also use it to protect your board or win the value war, especially in the matchups in which damaging face is not very effective, since they heal up like crazy (such as Odd Warrior). Of course, if it’s possible, you’d still want to switch that Hero Power into DK Rexxar’s one when possible, if you’re going for a longer game at least.

All in all, Zul’jin is a powerful Hero card and it will 100% see play in Spell Hunter. On top of that, it MIGHT be played in some slower Secret Hunter builds – after all, replaying all of those Secrets and Spellstones can be a nice late game win condition. While DK Rexxar is a better card in general, remember that it will rotate out quite soon and then Zul’jin will be the only option left. And honestly, it’s not a bad option at all.