The Standard rotation of 2022 is rapidly approaching. We are getting the expansion announcement on 15 March, and the Core set changes shortly thereafter. We will soon say goodbye to Ashes of Outland, Scholomance Academy, and Madness at the Darkmoon Faire.

However, we are not saying goodbye to the power of United in Stormwind and Fractured in Alterac Valley. While 2021 started with some business as usual in the form of Forged in the Barrens, Blizzard tweaked the power knob a bit higher for the late-year expansions. United in Stormwind came with Questlines. Fractured in Alterac Valley added new Hero cards. And the latest mini-set, Onyxia’s Lair, dropped a Kazakusan on top of it all.

With the Hearthstone meta dominated by these powerhouses that promote a linear gameplay experience, what can Blizzard do in the next expansion? Is there any room for innovation? Is there any way to adjust the game balance to a less polarized state?

On Twitter, Iksar is hyping up the next expansion in all possible ways. He is especially excited about the next major thing that is coming.

Yeah! The ‘major’ thing for the next set is one of my favorite things we’ve done.

Hearthstone is my all-time favorite game (along with WoW) so it’s still very easy for me to get excited about making it.

considered it for the upcoming expansion but ultimately decided no

actively working on this for next year, though

as always, will nerf as things come up

But how dominant will the 2021 signature cards be in each class and in the overall meta? Let’s take a look. 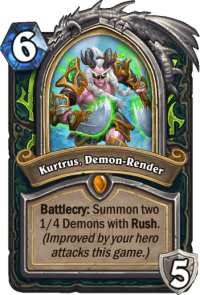 The Demon Hunter Questline Final Showdown has primarily seen play in combo decks as the discounts are ideally suited for enabling combo finishers. However, Kazakusan has extended its reach to Demon Hunter, where it combines with the Questline for fast card draw and cheap treasures. This approach is currently slightly too weak at around a 48% win rate but it is expected to become stronger with the rotation.

The Demon Hunter Hero card Kurtrus, Demon-Render is used in almost all Demon Hunter decks. It is just a generally powerful card, outperforming Kazakusan in the Kazakusan Demon Hunter even without the support of Felfire Deadeye and Expendable Performers. Both of these support cards are rotating out of Standard format, but Kurtrus does not seem to need them to be immensely powerful.

New archetypes should have a fair bit of room in Demon Hunter. The Questline is quite specific and leaves room for other archetypes, and while the Hero card is present in just about every deck, that also means that it does not dictate the way the whole deck functions, it just enhances whatever you put it in. 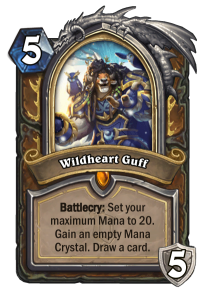 The Druid Questline Lost in the Park does not see much play at the moment. It requires attack buffs to function, and its current support is either rotating out or part of the Core set, so potentially also rotating out. It is easy for Blizzard to turn Druid’s Questline into recycling paper by not printing new support for it in 2022. On the other hand, without some new support, the card will be completely unplayable. Tough choices.

The Druid Hero card Wildheart Guff will be played in every Druid deck that ramps. Like Kurtrus, it does not completely dictate the direction of the deck, but it will be very common. In particular, it will be played together with Kazakusan to unleash some devastating power as early as possible. Overgrowth is rotating out of Standard, so Druid’s overall ramp capabilities are still unknown.

The Hunter Questline Defend the Dwarven District will be a major contender whenever Hunter has enough direct damage cards to support it. It would be a difficult design path to avoid such cards altogether. On the other hand, there will never be such an abundance of direct damage cards in the Standard format that players would have a lot of options on which ones to use with the Questline. The Hunter Questline will remain a very linear experience and is likely going to stay viable.

The Hunter Hero card Beaststalker Tavish will be a major asset to any slower Hunter decks that are not Questline decks.

The Mage Questline Sorcerer's Gambit was already hit with a nerf earlier as it was too dominant in its initial form. Whenever Mage has a good selection of Fire, Frost, and Arcane spells, building a linear deck around the Questline is an option. Again, the Standard format does not include enough cards for there to be a lot of options. Either there is just enough support, or there is too little support to use the card.

The Mage Hero card Magister Dawngrasp is likewise reliant on a good selection of different spell schools. In this case, just a couple of suitable spells per spell school is enough, and Dawngrasp is especially interested in spell schools other than the usual Fire, Frost, and Arcane. Right now Mask of C'Thun, a Shadow spell, is the key piece in Dawngrasp decks, and it is rotating out. Dawngrasp can be promoted by printing Shadow, Holy, Nature, or Fel spells for Mage to use, or kept down by not providing such support. 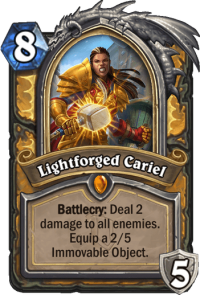 The Paladin Questline Rise to the Occasion already had some support in this Standard year, but it was still too weak to be played. Blizzard would need to give Paladin a good chunk of token support to make it a thing.

The Paladin Hero card Lightforged Cariel, on the other hand, will be played in every single Paladin deck that is not a pure aggro or token Hero Power deck. Big, Buff, Midrange, Dragons, whatever you can come up with, Cariel will be there.

The Priest Questline Seek Guidance is a fairly specific tool. It gives a slow control deck a one-card finisher that just wins the game. If you’re fine with being really slow, there is no better win condition. That snail pace has not existed in mainstream Hearthstone meta after United in Stormwind though.

The Priest Hero card Xyrella, the Devout is another archetype-specific Hero card, this time specifically Deathrattles. If there are enough good Deathrattle minions to support it, it will be one of the playable Priest archetypes.

The Rogue Questline Find the Imposter is a completely linear tempo deck built around various SI:7 cards. If there are enough SI:7 cards in the format, the Questline will be played. If there are not, it is dead. The deck where it is used almost builds itself because there will not be such a huge number of SI:7 cards in Standard that many could be skipped.

The Rogue Hero card Shadowcrafter Scabbs is extremely powerful, but the nerf from seven mana to eight mana saw it getting ditched from a number of decks. Even though it is a card that fits into every Rogue deck, it is not useful if you plan to end the game before turn eight anyway.

The Shaman Questline Command the Elements requires a specific Overload-based deck. If there are lots of good Overload cards, it will see play.

The Shaman Hero card Bru'kan of the Elements is in a similar position as the Rogue Hero card. If you expect games to last until turn eight, it will be included in every Shaman deck. It even fits into aggressive decks as a finisher thanks to the Fireball it can lob to the dome. It goes into every Midrange and Control Shaman deck with no questions asked. 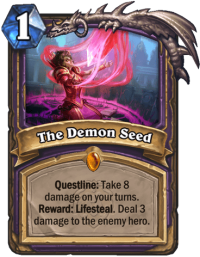 The Warlock Questline The Demon Seed was the most prolific Questline in the game. Nerfed, again and again, it has finally fallen out of favor because OwlTK Warlock is faster. There is still nothing wrong with the Questline and it fits into multiple Midrange, Control, and Combo Warlock decks. The question is just can other decks go under it effectively enough.

The Warlock Hero card Dreadlich Tamsin is a great general-purpose Hero that gives Warlock even more card draw alongside free 3/3 tokens. It goes into every Warlock deck that is not super aggressive.

The Warrior Questline Raid the Docks is a phenomenal tool as long as there are cheap Pirates around to support it. Even after the nerf, it is still doing great in Wild. It is unlikely to receive more support in Standard though.

The Warrio Hero card Rokara, the Valorous can serve as a finisher in a Midrange deck or as a good generic tool in a Control deck. A flexible tool that goes into a wide range of decks.

Kazakusan deserves a special mention. It is a win condition in a box that we have never had before. Control Warrior with a pure removal package and Kazakusan is a perfectly functional deck. You can ramp up to Kazakusan fast as a Druid or you can play a slow control deck with all removal, one card is all you need for your win condition. It is a Neutral card, so any class that has access to enough ramp or removal can make good use of it.

All of this suggests some major challenges for game design. 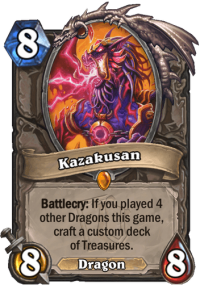 If the game slows down, Kazakusan and the Hero cards become really strong. Aggressive decks are keeping them in check right now, and they are barely getting the job done. Most classes have a Hero card that they want to play in all but the most aggressive decks. If aggro does not keep them away, that’s a Legendary card that is needed in every deck. This is devastating for budget decks by the way, as they can only compete against Hero cards and Kazakusan by being faster and faster.

Furthermore, any support for various Questlines needs to be carefully monitored. Attack buffs for Druid. Direct damage for Hunter. SI:7 cards for Rogue. Overload cards for Shaman. Pirates for Warrior. Take one wrong step, and the Questlines pop off like crazy. These linear cards have painted the design team into a maze that they need to navigate carefully so that they will not break the game balance. For Standard, this is just for one year. For Wild, this is forever. Questline Warrior is already too successful in Wild. The Warlock Questline had to be banned from Wild, as it could not be balanced for both formats at the same time. Questline Hunter was nerfed indirectly by nerfing the best damage card in Wild, but any new damage cards threaten to push it over the edge again.

Between Kazakusan, Seek Guidance, and The Demon Seed, there are lots of inevitable late-game win conditions. The upper boundary for game length has already been set before the first expansion of 2022 is released. Many Hero cards will be used in every deck of their classes if the game is not pure aggro. We have never been in a situation like this at the start of a new Standard year. It is possible to successfully navigate this maze, but the most likely way to do that is to introduce more power creep. Slowing things down is not an option now that nerfs are off the table. I hope you like a fast meta.