Today is the Nozdormu Day! Players are getting a new “Monthly” Quest (it’s really a Daily that you get once a month) that asks them to play 3 games with Nozdormu the Eternal in their deck. The reward is 1500 XP, so it’s definitely worth finishing it. 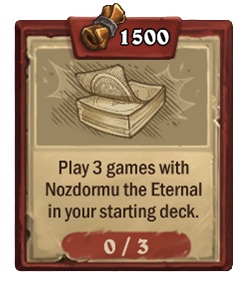 Heres are the few important things about the Nozdormu Day Quest: 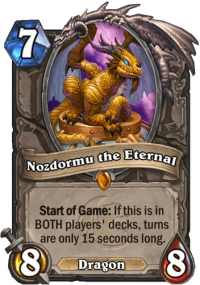 Of course, you can just add Nozdormu to any deck and still get Quest completions. You don’t need to win your games, so in theory, you can even start a match and go AFK until your opponent kills you. But it’s pretty clear that some builds are better than others when it comes to finishing it.

Decks that work well with Nozdormu are mostly straightforward decks with not a lot of decision-making. You have to think through your turns quickly, so having a clear best thing to do on each turn is good. Decks that curve out well are amazing, because you don’t have to think much about what you’re going to play, but only about your trades etc. You also get extra points for using it for Dragon synergy – normally it’s just an 8/8 body, but e.g. if you run some card that synergizes with Dragons (such as N'Zoth, God of the Deep), it can get some extra value.

Decks that don’t work well with Nozdormu include ones that play lots of cards during a single turn. For example, a deck with some elaborate combo that takes playing 10 different cards probably won’t work, you might not have enough time to pull it off – sometimes animations are really long! Similarly, decks that generate a lot of extra resources aren’t great, especially those with Discover options. It gives you a lot more to think about and each randomly generated card can alter your plan, so it’s hard to think ahead.

Here are some examples of decks you can use to finish the Quest this month: