Rise of Shadows has brought along the largest-ever change in Arena gameplay: the reintroduction of certain old sets in combinations we’ve not seen in Constructed coupled with brand new buckets and the RoS cards created an environment that took a long time to figure out and stabilize. It also meant that Team 5’s initial buckets were all out of whack, forcing an early adjustment – and it’s becoming quite clear that the understanding of these drafting edges will play perhaps the most important part in your arena results for the foreseeable future. 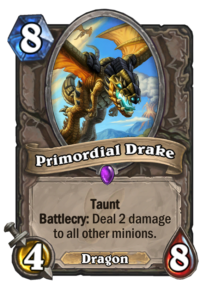 It wasn’t just Constructed where the Year of the Mammoth sets dominated the proceedings: cheap poisonous minions like Stubborn Gastropod, Giant Wasp and Stoneskin Basilisk, instant initiative tools like Fire Plume Phoenix and Primordial Drake, not to mention inexpensive top-tier taunts like Tar Creeper and Lone Champion made it fairly straightforward to draft a consistent slow deck for the last two years. These tools are all gone now, and they were mostly replaced by high-RNG swing tools.

So how does your gameplay strategy change? Unfortunately, the buckets are playing a larger-than-ever factor in the Arena right now simply because of how egregiously wrong they are and how massive the adjustments’ impacts can be. The first round of changes pushed Rogue from almost 59% overall winrate to 49.4%, which means guides like these can very easily be rendered obsolete by a change of this kind. Currently, Warlocks dominate with 56.1%, and the rest of this discussion will focus on how to handle this particular situation. 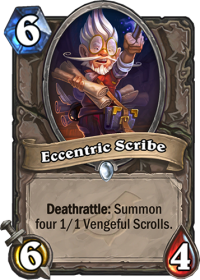 The main reason why inaccurate buckets have such an outsized impact is that you’ll almost always encounter the same sort of decks at higher wins, especially when coupled with poorly set initial card offering odds. 53% of Mage decks have at least one Flamestrike and over 60% of Warlocks have Abyssal Enforcer at their disposal – two cards whose offering odds were specifically reduced as a one-off decision when MSoG was originally around. On the neutral front, Eccentric Scribe and Haunted Creeper are two extremely strong and underbucketed minions which guarantee a sticky board presence.

This makes a pure control strategy fairly difficult to pull off, especially with Warlock, whose two monster cards (Abyssal Enforcer and Felfire Potion) both deal damage to the player. As such, you should aim for a midrange approach with the class to take full advantage of its flexibility: going full Zoo would deprive you of these high-end tools and playing for control often means that you’ll end up killing yourself with your own defensive cards. (Be careful with Voidcaller: it’s a trap as you rarely get enough demons to pull off that kind of a deck in Arena.

The myriad of swing tools also makes it less desirable to draft control, if only from a consistency perspective. Lackeys, Potion generation, Messenger Raven, Conjurer's Calling and the like means there are still many cards in the format that replace themselves and many effects can’t be reasonably accounted for. As such, drafting a more aggressive style will help with your blood pressure and also when it comes to incorporating the aforementioned underbucketed show-stoppers. That said, large neutral removals like Burly Shovelfist and Batterhead were also not given their dues, meaning the control avenue is not entirely closed off in the format. 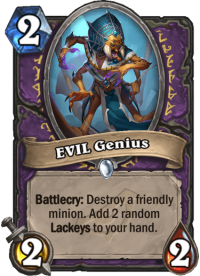 Going forward, it’s going to be an absolute necessity to do some research on the state of the buckets: the regular arena set rotation means that Team 5 will always have to start from scratch – especially because the older data they rely on for the re-introduced cards doesn’t always apply the way they think it does in the context of different sets, like with the limited effectiveness of Smuggler's Run and Grimestreet Outfitter in this Arena meta –, which already indicates that the offering balance will be out of whack on a regular basis. Worse still, Iksar has recently stated on Reddit that the devs will prioritize the average players’ perception over actual data, which essentially guarantees that the same sort of decks with the same cards will populate the higher winrate brackets.

“The objective in creating buckets based on pick rate is so that the pick will be interesting to the widest audience. Pick rate is metric that is useful in determining whether or a choice is interesting or not. If there is a card that the expert audience knows should be bucket 1 but most of the audience thinks is bucket 3, we choose to put it in bucket 3. The result of this from our perspective is that the average player will see an interesting choice, while the expert player will utilize their mastery of arena to make the “correct” choice and gain an advantage by doing so.”

Regardless of whether you agree or disagree with this design philosophy, it necessitates a list of misbucketed cards to work with – not only because of your own drafting edges, but because it also servers as a reminder of what you must play around north of circa five wins.

Here’s a list of the classes in order of overall winrate at the time of writing, with notable misbucketed cards that you’ll likely see in every draft:

There are way too many awesome tools available all over the mana spectrum to box in Warlock just based on buckets, but the reasons outlined above mean that I tend to go for more of a midrange-ish approach.

These tools mostly push the class towards a value-oriented strategy, but its viability has a lot to do with reliable strong early-game plays, which, thanks to cards like Dark Cultist and Kabal Talonpriest, pushes most good Priest decks into a bit more of a midrange-y direction than you’d normally expect.

Hunter’s slower removal tools and value cards are criminally underrated, but Warlocks’ and Rogues’ tendency to damage themselves makes a hyper-aggressive drafting style surprisingly viable, as long as you hard-commit to it.

High quantities of Flamestrike plus basically endless shenanigans off of Conjurer's Calling and Messenger Raven makes Mage the gambler’s dream in the current Arena meta, with a strong enough toolkit of spells to reliably go for a slower approach. Just make sure you have something to finish your opponent off with at some point!

Rogue’s cards were left unadjusted by the recent rebucketing, but the offering odds on their premium cards were changed to the extent that they’ve suffered a net 10% drop in global winrate. It’s still a very flexible class but it’s not worth playing when you’re set up to lose by the developers.

Sensing a trend? Paladin’s low-cost weapons are all severely underbucketed, and so are certain other early-game tools. The obligatory Silver Sword top-end plus the many tokens from the neutrals pretty much railroad your strategy – the real question is whether you can find the card quality to back it up.

Most of Shaman’s big idiots were underbucketed and weren’t adjusted heavily enough in the first round of changes. That said, they’re low enough on the charts that you can probably find better edges with the classes higher up this list.

Druid: Druid of the Scythe, The Forest's Aid, Savage Roar, Blessing of the Ancients

Once again, you’re pretty much railroaded into a token strategy off the back of how low these cards are offered coupled with the sticky neutral Deathrattle minions. Blessing of the Ancients being three buckets lower than Power of the Wild is one of the many weird anomalies of the current buckets,

Warrior: the class is in dire need of rebucketing so you’re better off avoiding it altogether but keep Sweeping Strikes in mind as a standout surprise option.