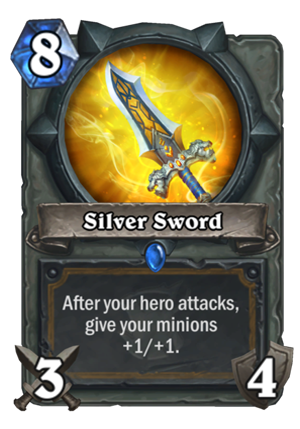 Silver Sword is a 8 Mana Cost Rare Paladin Weapon card from the The Witchwood set!

After your hero attacks, give your minions +1/+1.

Silver’s malleability limits its utility as an edged weapon. On the other hand... SHINY!
Tweet

Well, this is a pretty expensive weapon. 3/4 for 8 mana is very, very expensive, actually. We have a weapon like that at 5 mana – Assassin's Blade – and it sees zero play, because it’s too slow. However, this one comes with an extra effect – your whole board gets +1/+1 (Mark of the Lotus basically) when you swing it.

The thing is, I don’t exactly understand what deck you would want to put this into, to be honest. Something like Control Paladin, which doesn’t mind a high cost, doesn’t go wide on the board, so wouldn’t utilize this effect to its fullest potential. On the other hand, for a faster deck like Dude Paladin, Turn 8 is usually pretty late. They rarely have a huge board at this point, because if they did, they would already win the game. Yes, there are some cases in which you could e.g. play this on 8 and then play Call to Arms, one or two more cards and buff everything. It COULD be good, but I don’t think it will.

That’s because I feel like Vinecleaver is just stronger. 4/3 is a better weapon than 3/4 so late into the game in a faster deck – you can deal the same amount of damage over 3 turns instead of 4. While yes, you get one turn of effect less, it’s not that relevant, as the last swing of Silver Sword would come on Turn 11… games would really be over by that point.

Vinecleaver is not only 1 mana cheaper, but it actually actively rebuilds the board instead of snowballing the existing one. From my experience with Dude Paladin and against Dude Paladin, you rarely have a big board so late into the game, and VInecleaver’s main advantage is that you can get back on the board with the 1/1’s you can further buff etc. And it’s important to mention that Dude Paladin plays only a single copy of Vinecleaver, because two would be too slow.

I could potentially see some kind of Midrange Paladin centered around Dudes (so a bit slower Dude Paladin) wanting one copy of this, but then again, Paladin has LOTS of weapons available already and you don’t want to put too many into your deck. Especially after Vinecleaver rotates out, if we don’t get another good, high cost weapon. Right now? I doubt we will see this card played. It’s not really bad, but we have a better late game weapon option and it’s just slow.