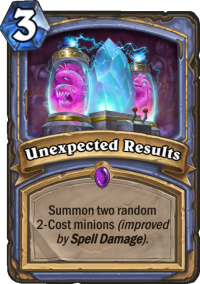 I first thought about a possibility of building the Spell Damage Mage when Unexpected Results were revealed. It was pretty obvious that more support cards are coming, I just didn’t knew what they will look like and how many we’ll get. And to be honest, I’m not disappointed – all of the Spell Damage synergy cards we’ve got seem really good.

At first, I thought about a more Midrange deck, but then I’ve realized that it doesn’t make much sense right now. It was pretty much left without a win condition. Instead, I’ve decided to go for a more classic Tempo Mage shell with the new additions.

I think that the deck already looks decent, but I’d love to see another cheap spell that benefits from Spell Damage. That’s the main issue here – there are a bunch of Spell Damage minions, but not enough synergies. Cards like Arcane Missiles or Frostbolt don’t work THAT well with Spell Damage. If something akin to Arcane Blast (of course not exactly, but a cheap spell that really benefits from it) would be released, I’d say that it might be a serious contender in the upcoming meta.

We all know how Tempo Mage works. The basic idea behind the deck is to stick some early game minions, utilize Spell synergies, deal some minion damage and then try to burn the opponent down. Unlike the normal Tempo Mage builds, this one has dropped the Secret synergies and plays Spell Damage synergies instead. Despite both styles having their merits, it’s impossible to pack both into a single deck – there’s just no space for it. Since Secret build is better at protecting the board through Explosive Runes and Counterspell, I had to go for a more minion-heavy build, because here minions are more likely to die. On the other hand, every single minion (besides Celestial Emissary, who only works once and then leaves a 2/1 body) is a massive threat. Mana Wyrm gets more attack, Sorcerer's Apprentice, Stargazer Luna can draw multiple cards, Spell Damage minions can be deadly if left for multiple turns and Vex Crow is a win condition by itself if left unattended. As you can see, pretty much every single minion will have to be answered right way, or else it can snowball the game for you.

Let’s talk about the Spell Damage minions first. There are a bunch of them – Bloodmage Thalnos, Celestial Emissary, Black Cat and Cosmic Anomaly. Spell Damage works extremely well in this deck, and sticking even one Spell Damage minion can deadly. Especially if it’s the Anomaly, +2 Spell Damage is really impressive, especially with Shooting Star. 3 damage to 3 minions for just 1 mana is a massive tempo play, allowing you to clear some early game boards against other Aggro/Tempo/Midrange decks. But even turning Arcane Missiles into Cinderstorm, or Frostbolt into almost-a-Fireball is really good. Not to mention that any Spell Damage minion has another use – boosting the card with a brand new mechanic.

Unexpected Results is non-damage card, which benefits from Spell Damage. Instead of dealing more damage, you summon a higher cost minion. While the card is below average at the base level (summoning 2 random 2-drops for 4 mana is like a worse Saronite Chain Gang unless you high-roll stuff like Millhouse Manastorm), even with just a single point of Spell Damage it’s already okay. Summoning let’s say two 3/3’s for 4 mana is pretty good. But it really starts being amazing if you can cast it with +2 Spell Damage – 2x random 4 mana minion for 4 mana is nuts. It creates so much tempo on the board, and given that you also have the Spell Damage minion to complement it, your opponent just needs AoE or he will take lots of damage. 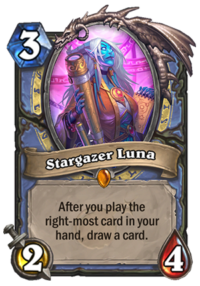 Another new card that fits right into this deck is Stargazer Luna. Although the 2/4 body for 3 mana is not impressive, her drawing even a single card is already worth it. And let’s be honest, that is not going to be hard. With six 1 mana cards and nine 2 mana cards, half of your deck costs 1-2 mana. In the mid game, whenever you topdeck a cheap card, you can play Luna into that cheap card for a guaranteed draw. And then, if you get lucky, you might draw more. 2-3 cards in a single turn is not out of question. It’s also in line with all of the other minions in the deck – high priority target, if she sticks to the board even for one turn, you can get lots of value, especially later into the game. She’s a bit useless once you get Aluneth, but consistency is important. A deck like that will run out of cards quickly very often, and she can actually help you with getting to Aluneth as quickly as possible. Even then, it’s still a 2/4 body, and given this deck’s low curve, there are situations in which you might even want to have an extra draw or two right after playing Aluneth.

But of course, the deck still packs some good old burn. Ideally, you want to deal as much damage with minions as possible, but if your opponent survives at 15 health and you can’t stick any minion, it doesn’t mean that you’ve lost. Between Arcane Missiles, Frostbolt, Cinderstorm and Fireball the deck still packs a lot of reach, and can even generate something extra from Primordial Glyph. With the amount of Spell Damage, most of your burn cards will also deal some extra damage, since it’s impossible for every opponent to kill every single of your Spell Damage minions. Let’s say sticking a Black Cat, in the mid game, then playing Cosmic Anomaly + Arcane Missiles + Frostbolt will deal 12 damage instead of the normal 6, and those are scenarios that are definitely going to happen. 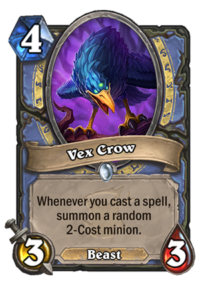 And last, but not least, Vex Crow is another win condition. Your usual Tempo Mage deck runs Lifedrinker in this slot, but I feel like Crow is better in this one for a few reasons. First and most importantly – you will need to rely on minion damage anyway, no matter how you look at it. You don’t have enough burn to just kill your opponent. So pushing the minion-heavy strategy might be better than the burn strategy. Then, I’ve mentioned it already a few times, the deck runs so many high priority targets. There is a significant chance that your opponent will burn their early/mid game removals on other minions already, such as Mana Wyrm, Sorcerer’s Apprentice, Luna or Cosmic Anomaly, and he won’t have one left for the Crow. The deck runs eight 1-2 mana spells, so Crow should have more than enough fuel, especially since Primordial Glyph will often count as two. Great thing about Vex Crow is that it will not only be a threat itself, but it will also create more threats, demanding an AoE clear. Between two Vex Crows and two Unexpected Results, you might be able to “flood” the board a few times, hopefully running your opponent out of AoE removals. 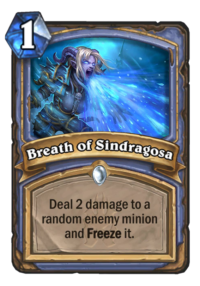