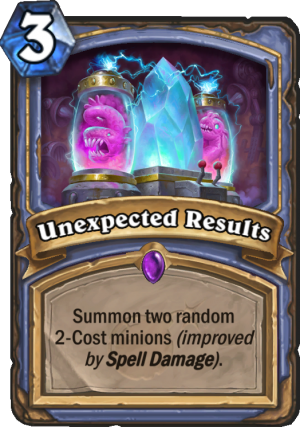 Unexpected Results is a 3 Mana Cost Epic Mage Spell card from the The Boomsday Project set!

Sometimes science is more art than science. A lot of people don’t get that.
Tweet

I just love new mechanics. Who doesn’t? This is the first time a non-damage spell gets affected by Spell Damage.

As a base cards, this is just weak. Paying 4 mana to summon two random 2-drops is underwhelming. Not only the bodies will, on average, be pretty weak, but since you summon, not play them, all of the Battlecries will be irrelevant. You don’t want to play a card like that.

However, it being improved by Spell Damage makes it a more interesting choice. With just +1 Spell Damage on the board, it now summons two 3-drops, which would be well worth paying 4 mana for. So just curving with a Black Cat into this one, you will have a really nice tempo play. That said, sticking a Spell Damage minion is not necessarily easy, those will die most of the time. You can play it with Bloodmage Thalnos on the same turn, and it’s okay, but not amazing. You could also experiment with Tainted Zealot and… that’s it. Yeah. That’s the problem – there aren’t enough good sources of Spell Damage in Constructed, which this card desperately needs. Of course, if you manage to stick a Malygos onto the board, then this will summon two 7-drops. Amazing, but if you stick Malygos to the board, you’d rather just throw a bunch of spells at your opponent and win the game…

This might be a fun/solid option in a Spell Damage Mage deck. Right now we’re still far from creating one, but if Blizzard will push that theme this expansion, this card might be much better than it seems right now.

Edit: A new Mage minion was just revealed (Celestial Emissary) and, exactly, it seems like Spell Damage will be pushed in Mage this expansion. While we’ll need to see more cards to really tell whether it will be worth it or not, with a few more good Spell Damage minions, I wouldn’t be surprised if this would play. With just +1 Spell Damage, this is already good enough – with +2 it’s great, and with +3 or more it’s nuts. We’ll see how it works, but we still need to remember the fact that it sucks without any Spell Damage on the board. But it seems like something fun to experiment with.

Card rating: 4/10 right now, but it can be better if more Spell Damage synergy gets revealed