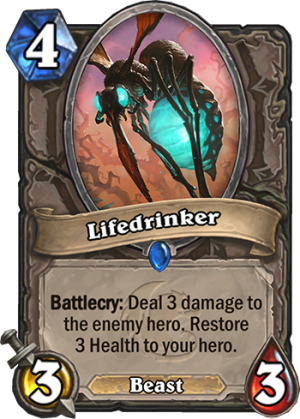 Battlecry: Deal 3 damage to the enemy hero. Restore 3 Health to your hero.

This card is a bit counter-intuitive. It both deals damage to your opponent’s Hero and heals you. Those are usually the things you want to do in a completely different decks. Dealing face damage is good in Aggro, while healing your Hero is good in Control. Midrange deck also assumes either a control role (vs Aggro) or a beatdown role (vs Control), so it never really needs BOTH damage and healing at the same time.

For Aggro, the healing part can be ignored, 3 damage is good, but you’d rahter play a better body than a 3/3 on Turn 4. 3/3 is easy to remove, while something like even a vanilla 4/5 might be out of range and get in a hit or two (resulting in more damage overall).

Control deck would definitely play Earthen Ring Farseer before it – 1 mana cheaper and healing is targeted.

Midrange might POSSIBLY want to play it, but this card is still pretty bad on the curve. And although not as much as Aggro, Midrange decks also care about their early curve.

By itself, the card looks bad. The only potential I see is some wonky combo with Shudderwock – if you play a few of those, maybe some other Battlecries that damage your opponent, you could have a really solid burst finisher. But the combo is pretty hard to pull off, so it might not actually work.