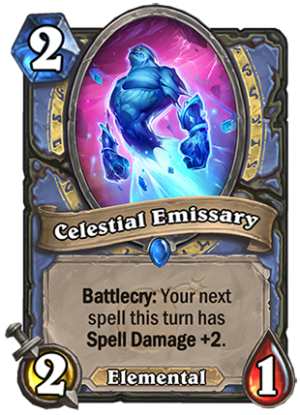 Battlecry: Your next spell this turn has Spell Damage +2.

While it’s too early to tell yet, Mage might be getting a Spell Damage support this expansion. With this card and Unexpected Results, it certainly seems that it’s one of the themes they’re pushing. So while I can only talk about the current synergies, and it’s still too early to make a full Spell Mage deck, that might be something Blizzard is aiming for this expansion. Those two cards already work quite well together – for 6 mana, you get a 2/1 body and two random 4-drops. Not bad at all.

It’s a very interesting card, and I absolutely love it. 2 mana for a 2/1 minion is weak, but you don’t play it for the body. This card is a bit like Bloodmage Thalnos – disposable card that boosts your spell. While Thalnos could theoretically survive, and you could use it with many spells, the idea is similar – you pay a small minion to boost your spells. Thalnos cycles, but this gets a bigger body and one extra spell damage. That +1 Spell Damage is very, very important. Having a cheap source of +2 Spell Damage, even if for one spell only, can turn even the smallest AoE cards into serious board clears. It’s probably not worth to use it with single target spells, although it might come handy if you’re 2 damage off lethal.

It works pretty well with any kind of AoE. Boosting Flamestrike from 4 to 6 damage or Blizzard from 2 to 4 damage is pretty big. But it works best with small AoEs, such as Arcane Explosion. This + AE is 4 mana for a 2/1 body and 3 AoE damage. That can really shut down some Aggro decks’ early development. I believe that if the archetype based around Spell Damage will pop out, it will mostly play those cheaper spells that benefit from Spell Damage most. Because in case of Flamestrike, +2 Spell Damage gives you +50% damage. In case of Blizzard, +100%. But in case of Arcane Explosion, it’s a massive +200%.

Outside of the Spell Damage Mage that doesn’t exist yet, another deck that could potentially utilize this is Big Spell Mage. The deck runs 8 AoE clears in total, making extra Spell Damage very useful in certain situations. Outside of the Dragon's Fury 7 damage high-rolls, its AoEs are often too small to clear some board. For example, opponent flooding the entire board with 5-6 health minions. Flamestrike is not enough, and you have to either count on a lucky Dragon’s Fury roll or play Blizzard first and then Flamestrike next turn (which is obviously not the most optimal play). With this card, you could just clear the entire board with a single spell. Will it be useful? Well, that mostly depends on the meta – if people will run lots of cards that are just out of range of the AoEs, then it might be. Additional upside is that the 2/1 body can sometimes be pinged in the late game (e.g. Celestial Emissary + Blizzard + ping), producing a Water Elemental with Frost Lich Jaina.

I like this card, it doesn’t seem over the top, but probably good enough to warrant some play. Right now it’s like a 6/10 in Big Spell Mage, but it would obviously be higher in Spell Damage Mage.